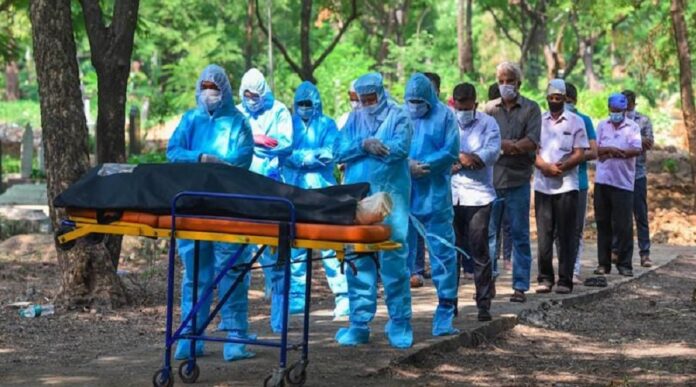 Nearly 50,000 people have succumbed to the novel coronavirus infection in India so far. Each day, municipal bodies, graveyard workers and funeral homes across the country have to put 400-500 people to rest.

Suman Kumar Gupta, the chief convener of Delhi’s Nigambodh Ghat cremation ground’s working committee, said “the situation is better now” but still has to be managed. When the infection was peaking in Delhi, he said “25-30 COVID-19 positive bodies were cremated in a single day. Some days, we would get even 40 such bodies in a day, in addition to others.”

The municipal system and graveyards have been overwhelmed with pressure. Volunteers, both NGOs and individuals, have been pitching in to help and have been welcomed by the local authorities. The volunteers make sure everyone is given a dignified cremation or burial.

In Delhi, the Shaheed Bhagat Singh Sewa Group (SBS) has been doing this job. Another group that has pitched in is the Popular Front of India (PFI). Till August, the group has helped cremate and bury at least 1,117 people who died of COVID-19.

Speaking to #KhabarLive, PFI member Kassali Meeran said that PFI has performed funerals in at least eight states of the country. From Karnataka to Bihar and Goa, their volunteer work has reached far and wide. They have a strong presence in Maharashtra, Tamil Nadu, Kerala, and Karnataka.

Another PFI member, Mohamed Ismail said that the group works in collaboration with the municipalities in every region and “follows the prescribed guidelines on COVID-19 dead-body management.”

S. Ravi, the government-appointed health inspector in Villupuram district of Tamil Nadu, told #KhabarLive that because the workload is too high sometimes, the district administration gets in touch with private volunteers to help cremate those who have succumbed to COVID-19.

But while PFI’s work has been praised and acknowledged in Chennai and some other regions, in Mumbai, the group was at the receiving end of a political backlash.

In early June, an order of the Brihanmumbai Municipal Corporation (BMC) stated that in the case of the death of a COVID-19 positive Muslim patient, the PFI will “facilitate the burial”.

Maharasthra’s leader of opposition Devendra Fadnavis objected to this agreement, claiming that the group was accused of “anti-national and anti-social activities”. He demanded the BMC and the Pune Municipal Corporation to “cancel their arrangements” with the group.

The PFI describes itself as a socio-political group that works towards the empowerment of Muslims and other marginalized sections of society. It has taken a strong political stance against the Citizenship (Amendment) Act (CAA), National Register of Citizens (NRC) and the National Population Register (NPR).

Many civil society groups have expressed a fear that the twin policies of NRC and CAA could be used to systematically disenfranchise Indian Muslims.

In December 2019, the PFI said: “The endeavor of NPR (National Population Register) does not pertain to the usual census pursued as per the Census Act of 1948… All these points to the sinister agenda behind the preparation of NPR, a dubious way of launching controversial NRC.”

On the same day this release was issued, the UP Police announced the arrest of two PFI members in connection with anti-CAA protests in the state. The Delhi police have also accused the group of ‘funding‘ the riots in Northeast Delhi earlier this year.

Many have criticized Fadnavis’s politicization of PFI’s volunteer work at a time of crisis. But Mohamed Ismail says that PFI wants to rise above politics and keep doing their work.
“We have been doing this kind of volunteer work in the past also. We are not new to this.

During the Chennai floods and Kerala floods, we helped bury bodies, we set up food-distribution camps, and did disaster relief work. In the immediate aftermath of the COVID-19 induced lockdown, when migrant workers were traveling by foot to their native places, we helped supply food and basic amenities to them,” he said.

Recently, the PFI’s volunteers performed the last rites of a senior BJP leader, Somashekhara Gowda, who died of COVID-19. Gowda’s family was in quarantine and was not allowed to leave home.

Like the PFI, many other volunteer groups have also emerged with strength, hope, and unity in the pandemic’s grim atmosphere.

In Pune, young volunteers from the Mulnivasi Muslim Manch (MMM), after taking official permission from the Pune Municipal Corporation, are cremating unclaimed dead bodies of COVID-19 patients. Families of many patients are unwilling to cremate the dead bodies because of the (unfounded) fear that they could contract the virus.

The group told the #KhabarLive that their objective is to ease the administration’s burdens. They added that they take care of unclaimed COVID-19 dead bodies at hospitals in their city.

In Kashmir, a 37-year-old Sajad Khan, who runs a departmental store, has become Srinagar’s Good Samaritan. “This virus disrupted our compassionate community ecosystem,” he told #KhabarLive, and hence decided to arrange burials for those who have died of COVID-19. Khan’s work has received praise from an ex-cop in Srinagar. When the ex-cop’s 55-year-old uncle died due to COVID-19, he wanted Khan and his team to conduct the funeral.

Speaking to #KhabarLive, Manish Pal Singh of the Shaheed Bhagat Singh Sewa Group said that in addition to cremating dead bodies of COVID-19 patients, the group provides free ambulance services to and from COVID-19 hospitals in Delhi. He said that they also provide essential supplies to families who have been put under home quarantine by the administration.

ALSO READ:  Why Most Of The Hyderabadi 'Nawabi Cuisines' Are Dying?

“Hospitals don’t have enough ambulances to transport the dead, so they rely on us,” Singh said. “For families locked in their homes, nobody helps them because of fear. So we supply essential ration and keep in touch with them”, he added.

Singh said that while it is the job of the local administration to supply families under home quarantine with ration and collect garbage – along with doing regular checks on the families, they are unable to ensure that every home gets these services.

Speaking to #KhabarLive, the founder of SBS, Jitender Singh Shunty accused the Delhi administration of “not reaching out” to people in need. He said that the COVID-19 treatment and the support provided by the administration depends on an individual’s status in society.

“If celebrities test positive for this virus, then it is treated as coronavirus. What about the people who are at home? They are always looked upon as a terrorist,” he told.

Manish Pal Singh, Shunty’s son, told #KhabarLive that both his parents and himself contracted COVID-19 while on duty. “We were surprised when we got no help from the administration. We did everything on our own,” he said.

Singh said he did not want others to feel helpless. Thus they started providing rations to families in isolation. As of July, SBS has helped cremate at least 200 dead bodies in Delhi.
In addition to the PFI, SBS, and individual volunteers, Good Samaritans and NGO groups in Tamil Nadu, Telangana, Andhra Pradesh, Punjab, and in Gujarat’s Ahmedabad have proved to be the right arm of the government machinery in a time of crisis. #KhabarLive #hydnews