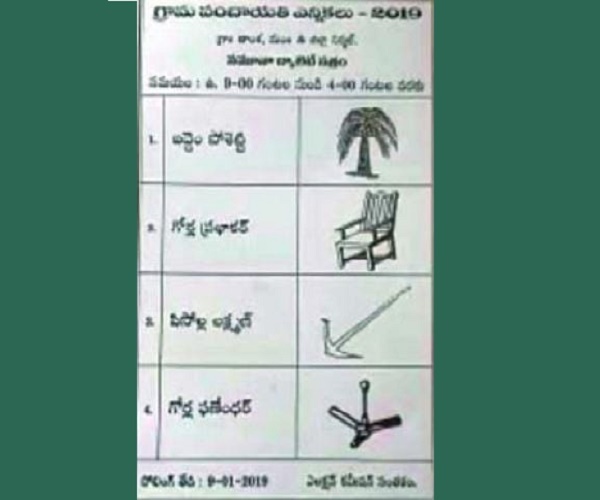 In a shocking development, The Thamsha village development committee conducted elections on its own for the sarpanch post after even preparing a model ballot paper and allocating symbols to the four candidates who contested in the elections in Nirmal mandal.

It appears that the attraction was the Rs 10 lakh development fund from the government in the event of a unanimous winner.

The question is what the village secretary was doing when unofficial elections were conducted for the Sarpanch’s post.

The other question is did they inform higher officials and did the latter make any effort to stop the election or did they indirectly cooperate to fulfill the villagers’ wishes.

Interestingly, the election commission has slotted polling here for January 25, at least 16 days away.

Baddam Poshetti was allotted the Toddy tree symbol, Gorla Prabhakar had the Chair, P. Laxman had the arrow and Gorla Faninder had a fan symbol. They were in the fray and polling was held on Wednesday.

The villagers followed all the necessary election processes and procedure to conduct the poll including applying ink on the finger. Only it was totally illegal!

What appears to be the haste behind the poll is villagers of Thamsha had their eye on the `10 lakh from the government for unanimously electing a sarpanch.

The Election Commission had made it clear that they would not consider unanimous results conducted before January 7.

It is learnt that the village development committees were actively working on conducting unanimous elections for the sarpanch post in the name of getting more funds for the development of the village.

But it was not all altruistic because they were serving their political interests and working in the interest of a particular political party. #KhabarLive