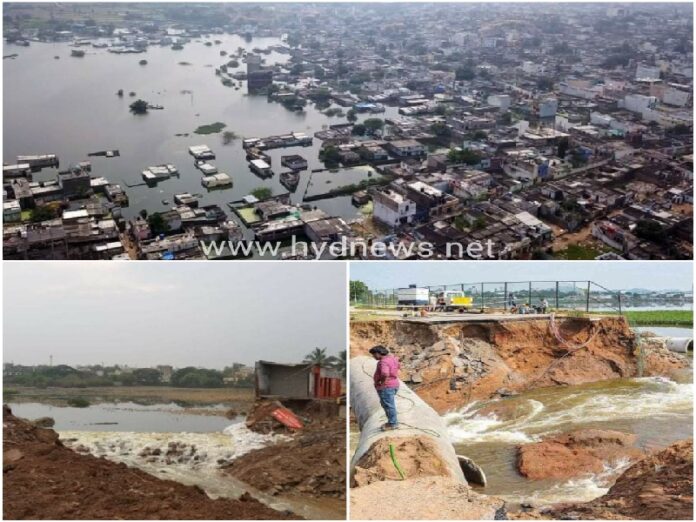 The episode of heavy floods in some colonies during torrential rains in Hyderabad become a mystery as the situation was not so grim but some elements managed it as a natural calamity. Let’s have a look in to the harsh reality. 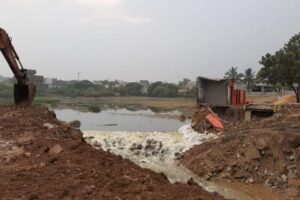 It was past 6 pm on October 18 when Ismail Q, who lives in the Hafiz Baba Nagar area in Hyderabad was alerted about a Facebook live by the GHMC (Greater Hyderabad Municipal Corporation) corporator for Chandrayangutta, Abdul Wahab. The corporator in his Facebook live urged residents of B, H, G blocks of Hafiz Baba Nagar to vacate from the ground floor of their homes and move to the first floor. “The localities were already flooded with water up to 2 to 3 feet due to incessant rain, but even then it hadn’t entered our homes,” recalled Ismail.

In the social media video, Abdul Wahab of the All India Majlis-e-Ittehad-ul-Muslimeen (AIMIM) could be seen wading through water as an autorickshaw floats by behind him, and he urges the people Baba Nagar staying on the ground floor to move to the first floor, “People of Baba Nagar who live on the ground floor, am urging you to move to the first floor as the Balapur bund (of Gurram Cheruvu lake) has been cut, water is going to come into the colony,” he warned.

Hyderabad had received heavy rainfall since the second week of October. Non-stop overnight rains on October 13 resulted in several lakes in the city overflowing, flooding colonies that had encroached upon flood tank levels (FTL) and buffer zones. However, some of the flooding of Hafiz Baba Nagar, it has now emerged, may have been man-made. Allegations have emerged that the Balapur the weir of the bund was widened which eventually resulted in massive flooding to Hafiz Baba Nagar and destroyed an estimated 4,000 homes.

Habeeb Khan, the Chief Engineer for Irrigation Department, Hyderabad denied the allegations claiming no knowledge of the issue and said the GHMC Engineer-in-Chief R Sreedhar was in charge of the lakes and bunds. Sreedhar however claimed he had no knowledge of the issue and directed #KhabarLive to Murali Shreedhar, Section Engineer with the Irrigation Department who was unresponsive. The GHMC deputy commissioner for the Chandrayangutta zone was unresponsive. 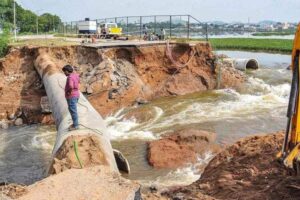 Since October 13, water levels in Gurram Cheruvu had risen, leading to the flooding of Barkas (a word that means barracks), a colony north of Hafiz Baba Nagar. Flood waters rose over five feet at this locality. At the time, Hafiz Baba Nagar was inundated but the flood waters had not entered the homes. The heavy rains on October 18 evening, however, made the situation in Barkas worse.

“The Gurram Cheruvu has two gates that when lifted allow excess water to flow into a nala (drain) that goes through Hafiz Baba Nagar,” explained an irrigation department official who did not wish to be identified. The opening of the two gates would have helped ease the water levels in Barkas. But the official said, “Water was being released from only one of the gates.”

The second gate remained shut as the drain had been blocked and the surroundings had been encroached upon over the years. Instead of clearing the encroachments before itself, the bund was allegedly dug up to divert water into the wetlands.

On October 15, the GHMC, local police and the corporator had brought earthmover machines to dig up a portion of the Balapur bund. This was reported by a local social media reporter. The aim was to release more water into Hafiz Baba Nagar from the lake and help flood waters recede from Barkas. The corporator was under pressure from residents of Barkas, who had protested on October 14 demanding that both gates of the lake be opened. A similar request was also made by residents from Hafiz Baba Nagar.

The Irrigation department official maintains that cutting the top part of a bund to allow the flow of excess water was an engineering mistake. The officer said Irrigation department engineers were not consulted before the top part of the Balapur bund was chipped. “The natural path of the water and the FTL lands have been fully encroached. The lake is over 90 acres in size, barely some 20 acres is left and even that is now being encroached”, he adds.

#KhabarLive spoke to several locals who said they had urged the corporator to release water from the lake by opening up both the drains. The Irrigation department official alleged the gate was deliberately damaged years ago, while the drains were filled with boulders and cement.

At around 10 pm on October 18, Ismail moved his 81-year-old mother, five children and wife to the second floor of the building. At 11 pm he got another social media alert of a Facebook live by Abdul Wahab. 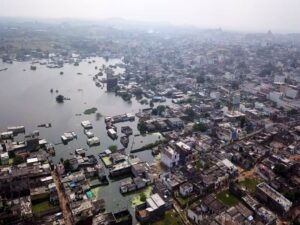 According to the Irrigation Department, the bund broke completely past 1:30 am on October 19. Hafiz Baba Nagar residents confirm that they were alerted about the bund breaking at 2 am through loudspeakers at mosques.

Ismail and his family, like the rest of the 90,000 odd people of the colony, didn’t sleep a wink that night. “The water entered our home at 12 am. Within two hours, the water even flooded the first floor. The children got really scared. I for a second wondered if the building would collapse, we didn’t sleep a wink,” said Ismail, recalling the terrors of that night. At noon on October 19, Ismail packed his family in a rented car after suffering massive damage to his property.

Besides overwhelming sadness, residents also expressed anger at a situation that they believe was avoidable. Ibrahim, another resident of the colony, stayed at a rented mud house owned by his brother. The house was flooded since October 13 but the heavy flow of water from the broken Balapur bund demolished the house. “I am already dependent on my relatives since I lost my job at a sales showroom due to the lockdown,” said the 42-year-old. Little remains of the single room mud house. ”It floods every year and I am prepared for that every year, but this flooding is the corporators fault. When the lake was overflowing two days ago, I along with a few others had personally gone and met the corporator telling him to release the water through both the gates, but he didn’t listen,” alleged Ibrahim to #KhabarLive on October 19.

There are two gates on the Balapur bund, excess rainwater flows from both the gates on either ends of the bund into drains, explains the Irrigation department official, “Even if we had opened the second gate Hafiz Baba Nagar would have flooded. But not like the way we saw, it would have been gradual and people would have had enough time to save their belongings,” said the officer who added that the reason for the gate not being opened was that the area had been encroached upon.

“Someone put boulders and cement on the drain and closed it,” said the officer. In 2019, the Revenue and Irrigation Department officials cleared close to 200 shacks built by Rohingya refugees who were given shelter on the lake bed by local politicians “It was a horrible thing to do but our duty is to protect the lake and maintain its FTL,” he explained.

In April 2020, a case was also registered against the AIMIM corporator Abdul Wahab by the then Bahadurpura Mandal Revenue Officer for allegedly encroaching upon the lake, sheltering Rohingyas and running shops. The corporator was accused of allegedly filling up the FTL area of the Gurram Cheruvu with gravel and levelling the surface, reported.

The said location of encroachment at Hafiz Baba Nagar is barely 500 meters away from Umar colony and the junction where relief work by volunteer groups are in full swing. A blue-painted marriage function hall stands bordering the bund, within the 30 meters FTL limit for buildings set by the municipality. The function hall management office wasn’t forthcoming when asked who owns the building, “Why do you want to know? Who are you?” said a man at the desk, was asked to leave. #KhabarLive #hydnews