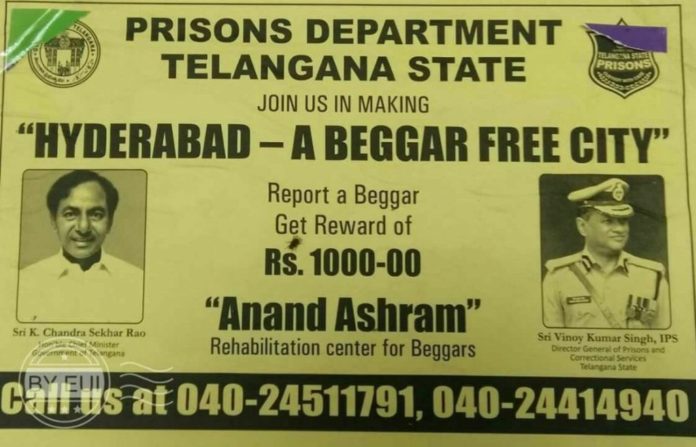 The police has even launched a scheme asking people to give information on beggars, if any, on the streets for an award.

When Prime Minister Narendra Modi came here to inaugurate the Hyderabad Metro Rail in November and also the Global Entrepreneur Summit – a summit where Ivanka Trump was going to be present – the local administration got into action to clean up the city.

New roads were laid, monuments and streets were lit up, and garbage removed. Part of this ‘cleaning up’ included rounding up and removing all the beggars so that they would not be visible.

Standard procedure – except, after the global entrepreneurship glitter receded, the beggars did not come back on the streets.

This was the idea of Vinoy Kumar Singh, director general and inspector general of Prisons and Correctional Services, an IPS officer who has been coming up with ideas with a stated mission to “bring social revolution through police efforts & empowerment of villagers”. He wants to make Hyderabad permanently “beggar-free”. His Facebook page is full of newspaper cuttings lauding his innovative ideas.

Among his recent suggestions was a request to the government to consider closing down some prisons because the crime rate was decreasing. Instead, he proposed, these jails could become cultural centres, including one ‘jail museum’ where people could voluntarily experience ‘imprisonment’ for a day for a fee. The idea was accepted and has apparently become successful.

After picking up the beggars, Singh launched a campaign on social media and in print to “educate” citizens that most beggars “were part of a mafia and were earning huge amounts of money”.

“Out of the estimated 5,000-odd beggars in the city, we feel over 4,500 of them are members of a begging mafia. They have homes and families. They just come, occupy a fixed slot, earn sometimes up to Rs 1,000 a day or more, and then go home. After we rounded them up, they all confessed and have given an undertaking not to return to it,” Singh told The Wire. Some of them will be given employment in petrol stations that the state will set up.

Singh says his idea of making Hyderabad beggar-free has been approved by the state’s home ministry on a “pilot basis” to make the city beggar-free permanently.

“Police and the state at large have a greater responsibility than merely maintaining law and order. We have to take care of the least privileged members of the society. In Ananda Ashram, we have one of the country’s best facility for rehabilitation of the destitute. It is better than the facilities at Mother Teresa’s Sisters of Charities,” he said.

What is more, the police has launched a scheme asking people to give information on beggars, if any, on the streets for an award.

“Rs 1,000 for any information given by calling our helpline which helps retrieve a beggar from the streets”, the advertisement which circulated widely on social media says.

But the move has caused strong consternation amongst citizens and activists. A local lawyer, L. Ravichander, said that some concerned citizens were considering legal action against the move.

“Does Ivanka Trump or anyone else need to look at our streets to know that we have beggars? Removing all the beggars may be legal under some provision, but when so many laws are not adhered to, it is unhealthy to enforce this particular one.”

Hyderabad’s best-known comedian, Rajasekhar Mamidanna, calls the beggars ‘street entrepreneurs’. “Begging has, in fact, reduced – most people on the street are vendors. It is crazy to remove them by calling them beggars.”

Singh rejects such criticism. He claims that the government has put them up in centres and is treating them well. “Let these human rights champions come and see our facility and how we look after them. “We give them free food, medication, a bed and other facilities. They are taught some work and given wages of Rs 100 a day once they take up work. Some of them are being rehabilitated with work at petrol stations. But yes, some of them are so used to easy money, so they run away.”

Yet, can the centres hold 5,000 or so beggars? No figures are available, but activists suspect that some of them may have been taken out of the city limits.

“A beggar-free Hyderabad. Is it an achievement or a shame?” asks Mamidanna. But so thrilled is the Hyderabad police that it is planning to export this model to other cities. #KhabarLive