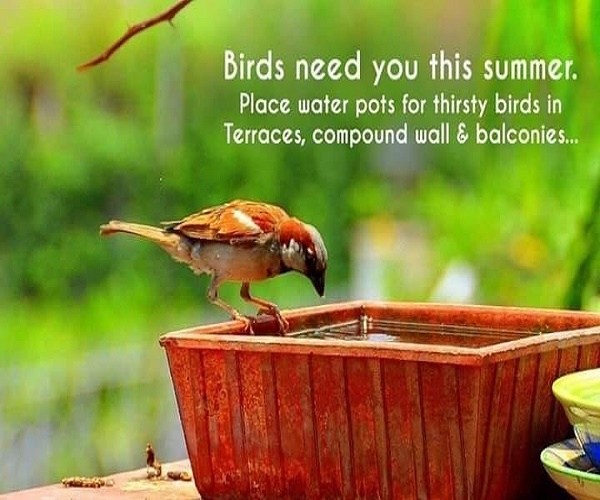 There’s a lot you can do this summer, to fill your garden with chirps. The earliest batches of ripe yellow mangoes have arrived, just as a sweltering heat has been steadily inching its way across the city. Summer is clearly on the horizon, and nature lovers will soon be setting up water bowls, baths, food and all kinds of relief for their favourite visitors — both four-legged and winged — that will be battling the city heat for months to come.

Though well-intended, these gestures might sometimes have an undesired effect: putting birds in harm’s way or causing a nuisance for the neighbourhood. K V Sudhakar, president, Hyderabad Naturalists Society, takes us through the basic dos and don’ts for bird lovers in the summer.

The habit of feeding birds is culturally inherent not only to Hyderabad, but to Telangana as a whole, states Sudhakar, elaborating, “Feeding the crow is a tradition in Telugu States. There are people who don’t eat a bite before offering rice to crows, that they believe to be their ancestors.”

But he also explains the other side of the story, of how too many crows being attracted to a certain place might get problematic. “Some people think that this practice is encouraging crows to roost in nearby trees, which creates a lot of problems, such as crow droppings on cars and other property.”

Another problem, he says, is the scattering of grains in places like the beach. “These just encourage pigeons, which are going through a population explosion as it is. Once they get used to this food source, these birds nest nearby. They are used to nesting in precarious areas such as cliff edges, and hence choose problematic spots like air conditioners on high buildings.”

Quench the thirst
Sudhakar explains that the feeding of birds has a different connotation in India than, say, Europe, “where winters are harsh and birds find it difficult to search for food at the time. In tropical places, scarcity of food for birds is not a problem.”

So, to those looking to make life easier for birds in the summer, he suggests focussing on water. A bird bath done well, he says — even a basic vessel of potable water with a bit of grain scattered nearby — can attract different species of birds to your garden or verandah. But there are things to keep in mind here, especially if you want some birds to look upon your space as a spot to nest and roost for long.

“Firstly,” asserts Sudhakar, “This is not something you can just stop after a couple of months. Once the bird gets used to the food and water, it must be continued. A sudden absence of their food source will cause them a lot of stress.”

Location matters
“Secondly, keep in mind that the bird bath has to be kept at a safe location, where predators can’t get to the birds and passers by can’t disturb them,” he adds, suggesting a not-too-prominent location, preferably in the shade, and at a bit of a height. “Keeping it on the ground level makes it easier for cats and other hunters to get to them,” he says.

The local flora in your garden can also play a role. “Certain bushes have flowers with nectar that attracts birds, such as hibiscus and ixora. The curry plant is also a good option,” says the man, who sees regular visits by tailor birds, seven sisters, sparrows and crows to his simple set-up at home. “Flowering trees like the fig tree and the Indian coral tree — erythrina indica — are also a favourite of many birds.”

And then there are the specific favourites: certain trees that are preferred by only certain species of birds. “The fruits of the yellow oleander trees are supposed to be poisonous, but I have read that these fruits are eaten by the koel,” he says. “And birds like the copper smith prefer to nest on the topmost branches of tall trees with bare branches, such as water sprouts.”

The latter isn’t exactly a visual pleasure, but is pleasing nonetheless. “You can hardly ever see these birds, but you will always hear them, with the trademark twang-like call that gave them their name.” #KhabarLive