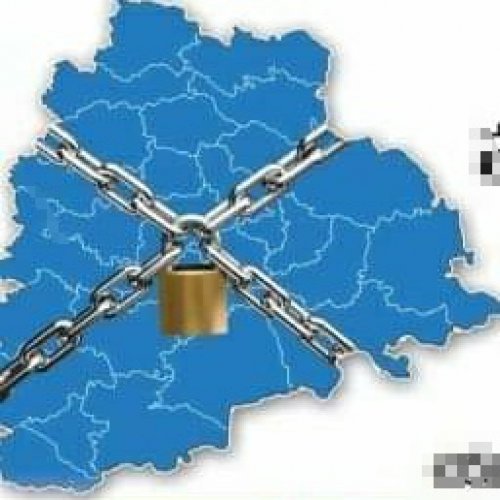 There is an urgent need to protect the labour force, particularly from the unorganised sector in Telangana to restart the halted working process and sustain the economical imbalances during Covid-19 Lockdown period.

There is no doubt that gestures of clapping and lighting diyas will boost the morale and confidence of lakhs of doctors, nurses, paramedics, security personnel, sanitary workers and a host of other agencies fighting an invisible virus, which has visibly shaken India and its economy.

Though such gestures are helping the containment of the pandemic, the actions on the crumbling Indian economy which is going to leave an indelible mark due to the present pandemic are the need of the hour. By god’s grace, we were able to insulate our economy from the 2008 global financial crisis. This time too, I feel, God’s intervention is needed since reports are already indicating more than 2% reduction in the GDP.

The COVID-19 pandemic is a much bigger threat in scale, size and impact than the 2008 crisis, because, unlike 2008, the present crisis has put brakes on economic activity, jeopardised financial stability, locked down the entire country and is bringing in enormous human sufferings never seen in the last one century.

So, with India’s greatest strength being unity in diversity, a common strategy to deal with COVID-19 will benefit the entire country. The approach has to be a ‘strategic team for containment’ in unison headed by the Union Health Minister with the Secretary and State Health Ministers with Principal Health Secretaries for free flow of information and exchange of field-level experiences for effective coordination.

Coming to the economic aspects, various domestic and global rating agencies are unanimous that this pandemic will be an economic tsunami for India which virtually sweeps away everything. Moody’s brought down its growth projections for India from 5.3% to 2.5% for the current fiscal, Goldman Sachs has estimated the GDP at 1.6%, Barclays said that the first phase of total shutdown cost to India would be about $120 billion or 4% of GDP and the IMF predicted that the economy would pass through the worst phase since 1930 and as many as 170 countries would suffer due to the pandemic.

The only ray of hope for India is that it may not fall into the abyss of recession like the US, Europe or the Asia-Pacific which have stronger trade ties with China. It means, India still can see light at the end of the tunnel – present crisis – and the lockdown will help it to buy time to strategise its preparedness for the containment of this deadly virus.

It’s also an opportunity for a country like India, which has the advantage of demographic dividend, to command over the world in pharmaceutical, ITeS, agriculture output, cheap labour resources, limited operational costs for industry, democratic governance and business-friendly laws.

With these advantages and cashing in on the drawbacks of China, our economy can take off post corona when we fire all engines in one go to achieve the twin objectives of recovery and growth.

Before preparing the launch-pad for economy to take off, there is an urgent need to protect workers and labour force, particularly from the unorganised sector, as our PM, CM and everyone wanted first to ensure life and then livelihood for the poor as this informal sector employs 94% of the total workforce and contributes 45% to the overall output.

This workforce will play a pivotal role in the revival of the economy. The ILO recently said the virus would push around 40 crore workers in India in the unorganised sector deeper into poverty and 125 crore worldwide and it would be the worst economic crisis in the last 75 years.

The Finance Minister, while declaring ‘we don’t want anyone to remain hungry, or without money’, announced a $22 billion package as PM Garib Kalyan Yojna. But, are we really providing Rs 1.7 lakh crore to the poor, or, is it just a jugglery of figures?

Or, are we just giving benefits in advance! I feel, proposed interventions in the package announced by the Finance Minister are just pre-dated. I doubt whether it is sufficient for 94% of the population in the informal sector. I feel it falls short of what is needed to support the poor since it is only 1% of India’s GDP and much less than 10% announced by the US, Singapore and other countries. I wish to dissect some of the issues of this package.

ALSO READ:  Rabble-Rouser, Hate-Monger 'Raja Singh' Is The Only BJP MLA In Telangana

Under PMGKY, the Finance Minister announced that the GoI would give Rs 2,000 as advance under PM-Kisan. It is not additional; it is part of the package of Rs 6,000 being paid annually. I have been fighting in and outside Parliament and advising the Finance Minister and the Prime Minister to follow the Telangana government, which is providing Rs 10,000 under Rythu Bandhu for every acre and if a farmer has 5 acres, s/he gets Rs 50,000 which is far better support than GoI’s.

So, farmers have been expecting, at least, Rs 6,000 over and above being paid under PM-Kisan. Secondly, the benefit is given to only 8.69 crore farmers but the actual number is close to 14 crore.

Announcement of 5 kg rice or wheat for the next three months is welcome. But, the corona crisis is unprecedented, hence, there is a need to extend this for at least, 5-6 months by including the leftout PDS and vulnerable families.

Some States such as Rajasthan, Tamil Nadu, Jharkhand are even giving cooked food to the urban poor which may also be considered with the help of NGOs, through community participation and others. #KhabarLive #hydnews