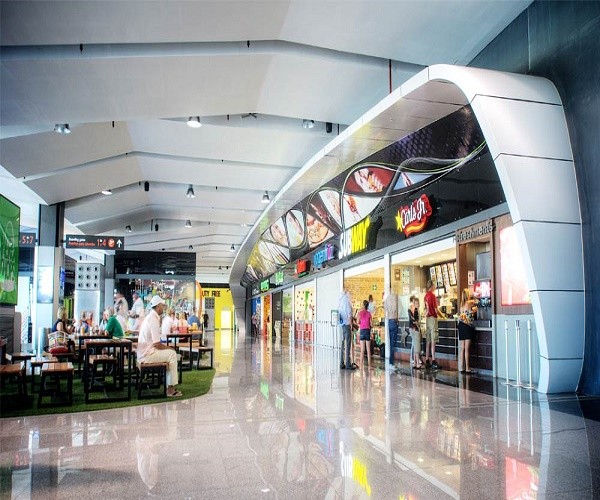 The Indian food and beverage industry is growing at an astronomical rate of 17%, owing to 34% of Indians who admitted to eating out at least twice a week. These phenomenal statistics are a direct result of India’s ever-increasing standard of living brought about by the general trend of uninhibited economic growth since the 1991 liberalisation reforms.

With jet-setting travellers patronising meals-on-the-go, airports and railway stations have become the new platter for culinary experiences. While restaurants and hotels have dominated the sector in recent years, the next great wave of growth for the food and beverage industry will come from the proverbial ‘skies’.

While in the past dining opportunities available for fliers were more or less limited to the airport café or home cooked foods, today the only inconvenience one faces in this regard is the agony of choice. Indian airports, especially those in the four metro cities, have a plethora of culinary options, including fine dining restaurants worthy of the best hotels, premium lounges which are the envy of the world, and franchises of some of their city’s most ‘happening’ and beloved pubs like Irish House.

Furthermore, while retail stores at airports for the past travellers were more prone to making an impulse purchase, today they veer towards need-based buying and making the most of the unique experience and benefits that shopping at an airport offers.

The substantial fall in airline prices brought about primarily by increased competition has resulted in these services no longer being constrained to the rich. The Union Budget of 2018-2019 was extremely favourable to the transport sector and emphasised particularly on domestic connectivity via air travel. This, coupled with people’s ever-increasing disposable incomes, has resulted in the air travel sector becoming a highly lucrative business venture for some of the world’s leading brands.

Profits aside, having one’s brand showcased at an airport, national or international, is a matter of great exclusivity and pride. Airport authorities are very selective about the companies they choose to associate with, and that in itself is a conscious reminder to travellers that the brand in question is truly exceptional in its standards of cleanliness, quality, and hygiene, to have made the cut.

It is not just air travel experience that has got an upgrade, but even the railways have chugged ahead on their own steam. Indian Railways is among the largest transportation systems in human history with 22 million passengers availing the service each day; a figure that is larger than the entire population of the Hyderabad. Each of these passengers is a potential customer, and so, even international giants like McDonald’s, KFC, Dominos, and Subway have set up outlets in humble stations across the nation, resulting in food courts that could rival Hyderabad’s biggest malls, and lounges with world class facilities.

In the past, due to concerns of hygiene and pricing, the vast majority of railway travellers had to make do with their own personal provisions from home. However, given the Union Budget of 2018-2019, which favoured the Indian Railways to a large degree and the government’s SwachhBharat campaign, the hygiene issues plaguing the sector should be largely resolved in the near future. Once again, the increasing disposable incomes of Indian travellers, the introduction of all-inclusive train services like the Tejas Express and The Rajdhani Express, make this sector a promising new frontier for the food and beverage industry.

In some cases, these brands have gone so far as to update their products in order to cater to the price consciousness of Indian travellers. A good example of this is Subway’s 4-Inch sub, which was developed when it came to light that the price point for the product had to be competitive and well below the minimum price of the brand’s iconic 6 Inch sandwich. The sub was also conceived keeping in mind customer’s convenience of grabbing something to eat on the go. As a result,it is not uncommon for one to see Subway outlets at stations all around the country, and given their success, it is certain that other players will soon join in the bonanza.

It would not be incorrect to state that the quality of restaurants, lounges, and cafes in airports are equivalent to, and in some ways even supersede their counterparts in the outside world. Railway stations still have a long way to go before they reach these levels of excellence, but they are getting there.

The fact remains, that as Indian’s incomes rise, these hubs of tourism and business will continue to attract brands from around the world. It is about time the Indian F&B industry capitalised on this trend that will eventually redefine the sector for decades to come. #KhabarLive