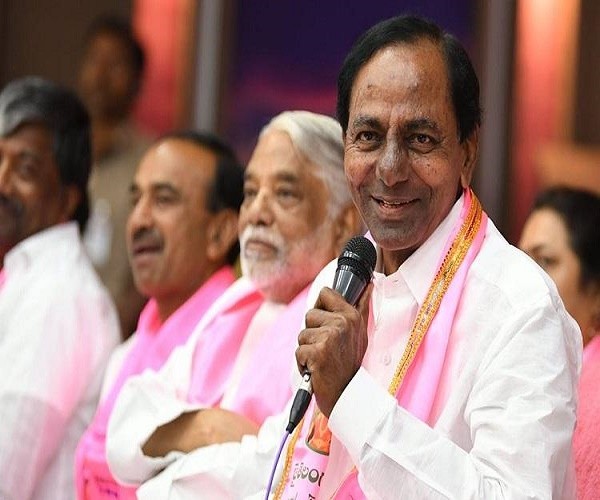 “Telangana wale jago, Andhra wale bhago” (People of Telangana, wake up; people of Andhra, run) – this was Telangana Rashtra Samithi (TRS) chief K Chandrashekar Rao’s war cry on November 9, 2009, just before he went on a fast unto death, demanding for a separate Telangana. These days, however, he is a lot mellower in his approach towards the people of Andhra Pradesh, who are settled in Telangana, as they form a sizable vote bank in the constituencies that make up Hyderabad.

“I want to tell one thing to my Andhra friends: Claim yourselves as Telangaites, don’t brand yourselves as Andhra people,” said KCR at a press meet at the TRS headquarters in October. He even lashed out at the media and Andhra Pradesh Chief Minister N Chandrababu Naidu for trying to differentiate the Telangana voters based on their nativity.

How TRS added 27 seats to its fold
When the 2014 state assembly results were announced, the TRS party had won 63 seats and the Telugu Desam Party (TDP), which opposed the state bifurcation, won just 15 seats.

Two years later, in 2016, the TDP witnessed a shocker when their 15 MLAs defected to TRS. And by 2018, the number reduced to just two MLAs.

The Congress, which had won 20 seats, would over the years lose seven MLAs, the Bahujan Samaj Party (BJP) would lose two MLAs and the YSR Congress Party three MLAs – all to the TRS.

Thus, the TRS, over the years, managed to add a total of 27 seats to their fold, bringing up their assembly seat tally from 63 to 90.

It’s at these 27 assembly seats that TRS lost in the 2014 state elections. And according to political analysts, the incumbent party will face a test from voters, who had earlier backed TDP, Congress, YSRCP and the BSP.

Tracing Andhra voters in Telangana
“One just needs to look at the constituencies where TDP candidates won in the 2014 state elections to get an estimate on how many Andhra settlers reside in Telangana,” said a professor and political analyst, who did not wish to be named citing MCC violations.

The Telangana government, in a 2014 letter to the 14th Finance Commission, estimated that out of the 3.5 crore population in the state, 67 lakh are settlers from other states, namely Andhra Pradesh.

“A vast majority of people from Andhra Pradesh reside in Hyderabad, which is an estimated 30 lakh; the rest are scattered across the districts bordering Andhra Pradesh. There are only estimates and no exact counts,” he added.

In Hyderabad region, the Andhra settlers are more influential as a vote bank in Kukatpally, Serilingampally, Rajendra Nagar, Malkajgiri and Quthbullapur, Jubilee Hills, Maheshwaram, Ibrahimpattanam and LB Nagar areas. Among districts, their influence can be witnessed mostly in those areas bordering Andhra Pradesh, say, analysts.

2016 GHMC elections, a non-indicator
TRS has often projected the 2016 Greater Hyderabad Municipal Corporation (GHMC) election results as the Andhra settlers’ acceptance of TRS rule. The party even gave 12 corporator tickets to Andhra Pradesh-origin people in an effort to reach out to the public. And, the TRS ended up winning 90 of the corporator seats in Hyderabad, while TDP won just one seat.

Nimmagadda Sita, a former spokesperson for TDP, said, “No one expected that result for TDP then, but the loss was in the cards as Naidu was not interested in contesting the GHMC elections.” The former TDP member opines that the party would have fared better had they put up a good fight.

She also notes that despite the earlier comments by KCR and other TRS leaders, the Andhra settlers could still vote for TRS as they did not face any problems from the party in the past four years and a half.

However, she adds, “The 2016 GHMC elections is not a good indicator to gauge if the Andhra settlers accept TRS. But it will be difficult to say how these voters swing as they are not a homogeneous class of voters. They are divided along the lines of caste, even though Telangana does not have a caste-based voting pattern,” pointed out the professor.

Civic issues vs caste equation
Political analysts are divided on caste being a deciding factor for Andhra settlers in Telangana. “The Kamma caste form traditional TDP voters, so are the Kapu caste. The Reddy caste will be divided as they would want to retain their power, so their votes could go for TRS or to their traditional voting preference, the Congress,” said the professor.

However, Sita is of the view that the caste equation forms a telling factor in Andhra Pradesh elections and not for the elections in Telangana. “It exists but is significantly less. So one cannot say with surety that the Kamma caste would vote for a leader of their own caste. The elections in Telangana will be more issue-based as the Andhra settlers here are mostly urban class voters. The issues they are concerned about would be about roads, transport and scheme implementations,” she added. #KhabarLive