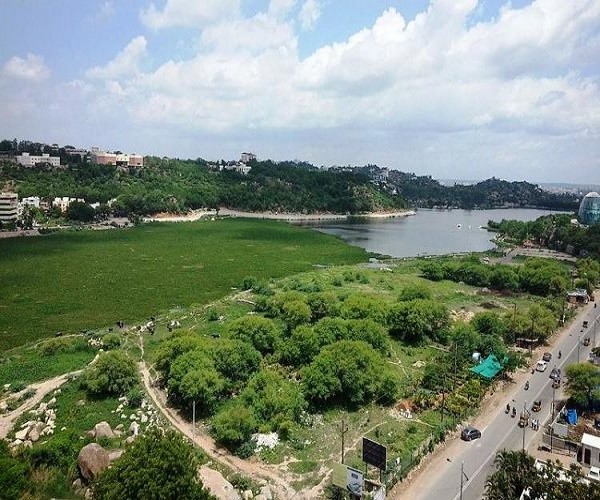 Hyderabad’s Durgam Cheruvu has been the beneficiary of sustained restoration efforts, especially after the IT boom and the growth of Hi Tech city turned this lake into a polluted mess. Its origins pre-date not just the suburb of Hi Tech city, but potentially Hyderabad itself.

The lake was built by the Qutb Shahis somewhere between 1518-1687 – Hyderabad was founded in 1589 – to supply water to Golconda Fort. This lake went on to provide water to the residents during the Mughal siege on Golconda that last eight months in 1687, before it fell to Aurangzeb’s forces.

Tanks like Durgam Cheruvu have played a key role in Telangana’s history over several centuries. Ceruvus – spelled as cheruvus in popular parlance – is the Telugu word for lake or a man-made tank. The locally used Sanskrit equivalents to this word are sāgaram and samudram (both meaning ocean).

In this age of modern civic amenities and piped water, it’s hard to imagine how much a humble lake could change the fortunes – literally – of its surroundings. Fact is that modern-day Telangana owes a massive debt to its numerous tanks, scattered across the region, serving as dispersed nodes for agriculture.

A thousand years ago, Telangana’s semi-arid terrain was only sparsely populated, primarily by pastoral nomads. In the 12th century, the region’s Kakatiya rulers (and their local subordinates) started building man-made reservoirs, which helped capture and harness the region’s relatively high levels of rainwater for irrigation.

According to historian Cynthia Talbot, these local rulers often believed that the construction of such tanks was a highly meritorious deed, benefiting the public at large and helping further the cause of dharma. In fact, tanks and temples became intimately linked during this period and their construction became twinned, a tradition that was continued and expanded by the Vijayanagara Empire.

An extract from a Kakatiya-era inscription at a Telangana temple, addressed to a munificent benefactor, illustrates, through its flowery praise, contemporary views of tank construction. “That great soul of great prosperity beautified land by big tanks (which had) deep, extensive and good waters and (which) gave happiness to numerous living beings.”

These tanks changed cultivation patterns in Telangana, paving way for a new system of settled agriculture and eventually changing the face of Telangana by establishing a new agrarian-based society and economy.

Naturally, the region’s prosperity and wealth grew accordingly. This, in turn, gave fresh impetus to tank and temple construction in the region. The construction of these tanks further increased the amount of arable land available in Telangana – a domino effect of sorts.

According to historian Richard Eaton, it’s estimated that the Kakatiya rulers and their local chiefs built around 5,000 of these tanks, the majority of which are still in use today. These include Ramappa lake (Rāmappa ceruvu), attached to the nearby Ramappa temple, and Pākāla lake (Pākāla ceruvu), the region’s two largest reservoirs, both in Warangal district.

So where does the word ceruvu come from?

Etymologically speaking, the word ceruvu derives from a Proto-Dravidian root meaning “to close, shut off”, which sort of describes what these tanks do.

Proto-Dravidian is the hypothetical common ancestral language of all Dravidian languages, and is where words of native stock (ie, words that have not been borrowed from external sources) in the various Dravidian languages have their origin.

The various descendants of individual root words form cognates, words across related languages sharing the same common root word, like kōḻi, kōḷi, and kōḍi in Tamil, Kannada, Telugu respectively (they all mean “chicken”). Usually, these words still retain a shared semantic sense too, and often, even the very same meaning. This, of course, is something plenty of speakers of Dravidian languages quickly notice when they’re exposed to one of the family’s other languages.

An example is the Kannada cognate of Telugu ceruvu – the word ‘kere’. Interestingly enough, kere means the exact same thing in Kannada as ceruvu, and features prominently in the history of another region.

As any resident of the sprawling metropolis of Benglauru will tell you (regardless of their Kannada ability), the word kere is a seemingly omnipresent fixture in the city’s urban landscape.

This is because man-made lakes also feature prominently in the history of Bengaluru, far across the Deccan from Hyderabad. The story, as we all know, goes that Kempegowda, a local chieftain subordinate to the Vijayanagara Empire, founded the city of Bengaḷūru. He then, famously, went on to build a network of tanks to quench the budding city’s thirst, enabling its growth, and helping sustain agriculture as well as support the city’s kōṭe (fort) and pēṭe (market) districts.

Most of these lakes (and the ones that followed them) have since fallen prey to unchecked urbanization, but some remain. The large (and mostly unnoticed) Hebbal lake (Hebbāḷa Kere) is one of the surviving lakes from Kempegowda’s times.

Telugu ceruvu and Kannada kere, both meaning the very same thing, have become ubiquitous in their respective geographic domains, reflecting extremely important parallel local traditions that share many things in common – function, history, and even the very linguistic root both the terms use. #KhabarLive