The covid deaths are showing horrible situation in Hyderabad. All burial grounds, crematoriums,  cemeteries are kept corpses on 2-3 days waiting list. Those who help cremate bodies say besides a lack of beds, steep hospital bills, and ambulance costs are forcing many COVID patients to prefer home treatment. 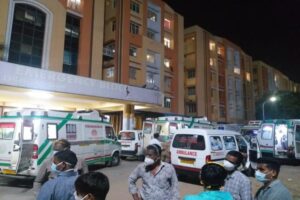 Zulaiqa Begum, a 50-year-old resident of Zeba Bagh in Hyderabad, tested positive for the coronavirus on April 16, but couldn’t find an ICU bed. Her son-in-law, Mohammad Sultan says after a day of struggling to find a bed, they chose to treat her at home for the next six days, “But day by day her lung infection kept getting worse. We had procured oxygen cylinders but didn’t know at what level to keep the oxygen, if we should keep it high or to keep it low and when to do that. A common man can’t monitor a patient whose vitals are dropping,” he says.

When the vitals of the patient dropped on April 26, the family desperately tried again to find a hospital bed. “Even if there are hospital beds they charge Rs 2 to 3 lakh and ask for upfront payment. On top of this, they charge Rs 70,000 per day for treatment. We can’t afford this, we are a middle-class family,” says Sultan who works as a teacher when he is not volunteering with a non-profit that helps cremate bodies. Zulaiqa Begum died the same day while being rushed to a hospital at JubileeHills, 10 kilometres away. 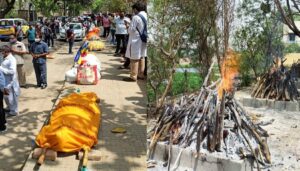 “There will be proper care for a patient at a hospital, such care is not possible at home. In an ICU they watch the patient for 24 hours, carry out tests for blood pressure, sugar and oxygen every few hours. We feel this guilt that perhaps we could have done more, perhaps my mother-in-law would have survived had she been admitted to a hospital,” he rues.

With a shortage of ICU beds in Hyderabad, several COVID-19 patients are forced to take treatment at home. Several of these patients have reportedly died at their homes unable to get a hospital bed. These deaths are not recorded at hospitals but only at crematoriums and burial grounds. Those who help cremate bodies of COVID-19 patients say families from middle to low-income families have been most affected in the second wave. 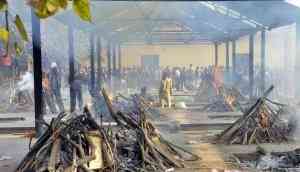 “Over the past one week, we have cremated 60 to 70 bodies of persons who died at home across Greater Hyderabad,” claims Syed Jalaluddin Zafar, President, Youth Welfare Telangana (YWT), a volunteer group of 20 persons assisting families cremate bodies in the state. A similar death trend is also being observed by other groups who assist with cremation on a non-profit basis.

Sai Teja, a non-profit assisting the city police with cremation, says in the first wave their organisation helped cremate 150 bodies of COVID-19 patients. “Since April 17, we have done 30 cremations. Out of these, 18 were home deaths,” says Sai while adding that in several of these home deaths, the families were hesitant to reveal the cause of death as COVID-19 owing to stigma. “Some families don’t say that the person died because of COVID-19.We know it is COVID-19 seeing how they keep their distance from the body. Most times, the person dies even before the COVID-19 test results come in. If people don’t act responsibly, this is going to get worse in the coming days,” he warns.

Jalaluddin says since the beginning of the pandemic, his organisation has cremated over 1,600 COVID-19 patients, and about 1,200 of these cremations were in Hyderabad. In the first wave from April 2020 to December 2021 the non-profit carried out about 900 cremations. 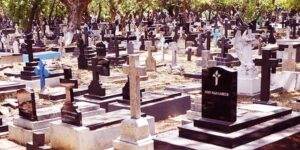 However, since the beginning of April 2021, the non-profit claims to have carried out about 600 cremations. “Each of us receive 20 to 30 calls daily seeking cremation help. Most are hospital deaths but we are seeing an increase in home deaths in the past week. Several home deaths happened after the patient was discharged from hospitals as they were unable to handle costs,” he adds.

On April 22, the Telangana Health Minister Eatala Rajender in a media address urged private hospitals to treat critically ill COVID-19 patients and not turn them away by sending them to Gandhi Hospital. He also urged patients to approach the hospitals sooner and not wait until the health of the patient deteriorates. 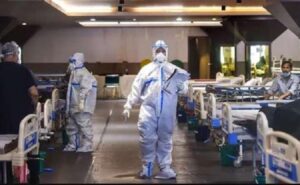 Most ICU beds at government hospitals in Hyderabad were occupied on Wednesday, suggests the real-time dashboard for hospital beds. All 616 ICU beds at Gandhi Hospital were full, and reports suggest all 1,256 oxygen beds were also full. News media visuals have shown ambulances parked one after another at Gandhi Hospital as patients taking home treatment waited for the hospital admission.

Costly treatment forcing people to choose home
Apart from a dire shortage of hospital beds, patients availing home treatments also have to run pillar to post for oxygen cylinders and ambulances. In recent weeks, a black market for oxygen refilling has sprung up in Hyderabad. Reports of private ambulance drivers fleecing patients has been reported. 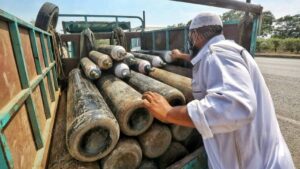 #KhabarLive met with Naveen Reddy at Jalpally on April 17 as he was trying to fill an oxygen cylinder for his father. Naveen chose to treat his father at home due to the steep prices being quoted by hospitals for a bed. “We have HDFC Ergo insurance but the hospitals said they won’t accept insurance. They asked for payment upfront and asked us to claim insurance later. They were charging lakhs for a few days of treatment. Even the ambulance was charging Rs 15,000, for a short trip.I couldn’t afford it,” says Naveen.

The Telangana government’s order on a price cap for COVID-19 treatment still remains on paper. Private hospitals have also stopped accepting treatment for COVID-19 under the Arogyashree scheme due to non-payment of previous dues.

Naveen at the time had bought an oxygen regulator and since then has learnt to operate the device by referring to YouTube videos, “We had to use the cylinder only once. The oxygen lasted for the night and now I can’t get a refill. My father is yet to fully recover but if his vitals drop again, we won’t have enough oxygen and I will have to rush him to a hospital. I am trying for hospital beds, and have borrowed some money just to be prepared,” he adds. 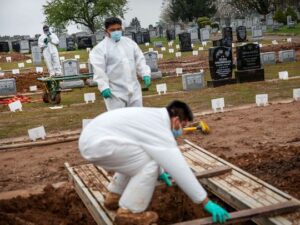 Mohammad Mujahid, a volunteer with YWT, focuses on the logistics of transporting bodies and often has to coordinate with private ambulance drivers. “When a patient is reported dead at home it could take up to seven hours for an ambulance to arrive. The ambulance drivers could charge anywhere between Rs 10,000 to Rs 25,000 for a few kilometres. The task of wrapping the body as per COVID-19 safety guidelines also becomes ours,” says Mujahid while adding that since April the rush at cremation grounds has resulted in a pile of up bodies, “At some burial grounds we have to book a slot three days in advance to bury the body.

At Hindu cremation sites they don’t accept the body after 6pm. So the relatives have to either shift the body to a hospital mortuary freezer or in a freezer for hire, both cost money for transportation and storage. The families have to shell out anywhere between Rs 15,000 to Rs 25,000 for keeping the body per day. So the public has to rely on nonprofits to transport the body to cremate,”  he points out.

“People give wrong contact details while getting tested at the UPHC or at the area hospital,” says Khalida, an Asha worker overseeing Sultan shahi and Valmiki Nagar areas. However, she says those who are in home isolation based on private consultation are not on their list.

“A few days ago a 17-year-old died at home and the family had kept his COVID-19 status hidden fearing stigma. Another family of 14 members tested positive but they agreed to let us help them only if we kept their COVID-19 status hidden. There are also home deaths that are going unrecorded, people die and the test comes positive later by then they are already buried but their death is classified as natural cause,” she observes. 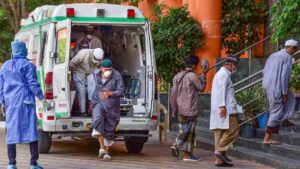 Sai called for the Telangana government to do the needful and bring private hospitals under government control before more patients die due to the lack of bed availability and high costs.

Jalaluddin said that several of the issues being faced today by patients such as oxygen availability and beds could have been averted had there been better coordination between the municipality, state government and private hospitals. He also noted that the state government should consider roping in the non-profits to help cremate the bodies quicker. ”The bodies begin to rot because of cremation delays due to a pile up of bodies. If we don’t do anything now, things could get worse in a couple of weeks,” he warns. #KhabarLive #hydnews