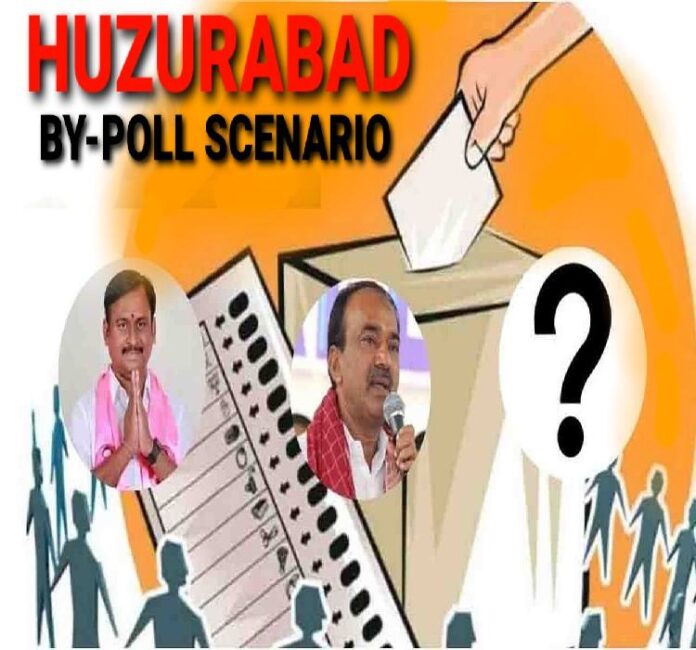 The growing political Instability and voters dilemma on changing scenario makes the by-election more crucial in Huzurabad. While the Telangana’s next assembly election is still two years away, the outcome of this elections will help to build a narrative.

The outcome of the by-poll in Telangana’s Huzurabad is expected to set a benchmark in determining the course of politics in the country’s youngest state. The election was necessitated by the resignation of Eatala Rajender, who was sacked as health minister in the Telangana Rashtra Samithi (TRS) government amid allegations of corruption,

The election is scheduled for October 30 and the result will be announced on November 2. Following his resignation, Rajender joined the BJP and is seeking re-election from his home constituency. The TRS and the Congress are fielding leaders from their student wings – Gellu Srinivas Yadav and Venkat Balamur respectively – who are from OBC communities.

The constituency will see a triangular contest involving the TRS, the BJP and the Congress.
While the state’s next assembly election is still two years away, the outcome in Huzurabad will help the opposition parties build a narrative. At the same time, a win will help KCR tighten his iron fist over the party and quell possible revolts within his camp in the near future, analyst K. Nageswar told The Wire.

While chief minister K. Chandrasekhar Rao (KCR) will want his party to emerge victorious, defeat is not likely to matter in the larger picture.

The TRS has a brute majority in the 119-member assembly, with 102 MLAs. (The TRS won 88 seats in the state’s 2018 assembly election but managed it inflate its tally with defections from opposition parties.)

If the party’s Vijaya Garjana (victory rally), scheduled for November 15, is any indication, it is confident about its prospects in Huzurabad.
“Though our party is engaged in a keen contest with Eatala Rajender, we will definitely retain Huzurabad,” said Boinapalli Vinod Kumar, TRS leader and vice-chairman of the state planning board. “We were a bit complacent in Dubbak [where the BJP won a by-poll] and the saffron party made the municipal election in Hyderabad a polarised contest. This time, we will not let it happen,” he told #KhabarLive.

BJP trying to repeat its Dubbaka show
A win in Huzurabad will help the BJP reinforce its claim as being a “credible and viable” alternative to KCR’s party, Raka Sudhakar, a right-wing analyst, told #KhabarLive.

The saffron party has thrown away the gains it made by winning the Dubbak by-election and putting up a good show in Greater Hyderabad Municipal Council polls. The right-wing party’s enthusiasm was dented by its failure to retain its MLC seat in the graduates’ constituency of Mahabubnagar-Ranga Reddy. The BJP also performed poorly in the by-election to the Nagarjuna Sagar assembly constituency.

The TRS bounced back to register spectacular wins in two MLC elections as well as the Nagarjuna Sagar by-election, stunning opposition parties who had predicted a decline in KCR’s fortunes.

A resurgent Congress
“Though the BJP has the potential to challenge KCR’s authority in the next election, we however cannot wish away the strengths of the Congress party,” Sudhakar said.

The Congress has a pan-Telangana presence in terms of organisation, cadre, leadership and votes, unlike the BJP which is by and large limited to North Telangana. The results in the recent urban local body (ULB) elections indicated these ground realities. The TRS secured around 40% of the votes polled while the Congress secured 24-26 % and the BJP 14%.

After an exodus of its lawmakers and leaders to the TRS, many saw the Congress fading to irrelevance in the state. But under the leadership of A. Revanth Reddy, the party is showing signs of gaining ground. Huzurabad will give it an opportunity to demonstrate it.

How are parties campaigning in Huzurabad?
Keeping in mind its underlying significance, KCR had rolled out a massive direct cash transfer scheme called ‘Dalit Bandhu’. The scheme, which aimed to transfer Rs 10 lakh to each Dalit family, was halted by the Election Commission of India (ECI) in the run-up to the elections.

In other ways too, KCR has played the caste card. The TRS government announced a quota for OBCs in the allotment of bars, wine shops, restaurants and so on. OBCs in the constituency are believed to account for 20,000-25,000 votes. The TRS is also depending on existing welfare schemes on offer to Yadavas, Mudiraj (fishermen) and Padmasalis, who also make up a sizeable chunk of the electorate.

Since OBC voters are expected to swing the election, the BJP has the advantage that both its candidate – Eatala Rajender – and its state president – Bandi Sanjay Kumar – are from OBC communities. Rajender belongs to the Mudiraj community, a powerful caste group within the OBCs and thus has a degree of clout. As a former close associate of KCR, Rajender also enjoys goodwill for his role in the Telangana statehood movement.

While he was a student leader with left-wing ideology, Rajender stepped into the assembly for the first time in 2004 as a TRS nominee from Kamalapur. After a delimitation exercise, the Huzurabad constituency was created. Rajender was elected three consecutive times from this constituency.

The BJP on its own is a marginal player in Huzurabad. It tallied a meagre 1,683 votes in the 2018 assembly elections – fewer than the votes polled for NOTA. However, Bandi Sanjay, who was elected from the Karimnagar Lok Sabha constituency, under which Huzurabad falls, was able to secure over 26,000 votes in this segment.

If Rajender manages to retain his seat, it will cement his position as the undisputed leader of Huzurabad.

However, the Congress was the TRS’s closest rival in the 2018 election, winning over 61,000 votes. Will Reddy’s leadership translate into better performance, is the question on many analysts’ lips.

However, given the strength of the ruling TRS and the individual pull of Rajender, with the BJP’s support behind him, the Congress may be reduced to the role of vote cutter.
Hyderabad-based analyst Syed Mushtaq said that every vote that the Congress manages to get will help the TRS. That the constituency has never gone into the Congress’s basket since 1983 shows that the grand old party is not a major player here, he said, driving his point home. #KhabarLive #hydnews