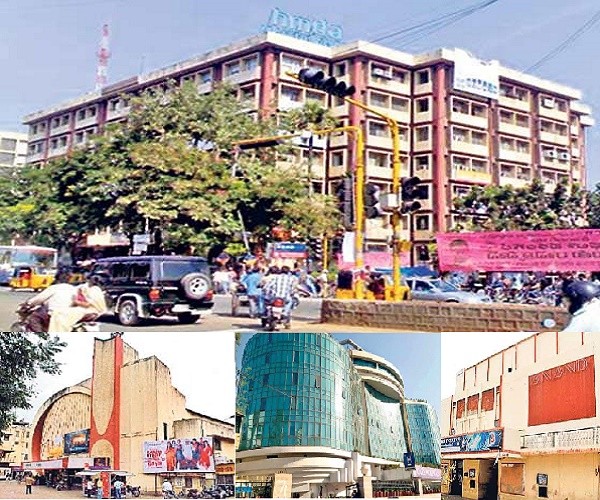 As old timers would fondly remember, there’s a story behind the name of each locality in Hyderabad which housed a famous theatre, café, building or godown that lent the name to the area.

Like every city does, Hyderabad has also transformed from being known as a cosmopolitan city in India to now being one of the best Metropolitan cities in the world.

Hyderabad, established by Muhammad Quli Qutb Shah on the banks of Musi river in 1591, has a rich history and, of course, innumerous stories to be shared.

Among such are stories of the localities in the city which became prominent due to the existence of popular buildings, theatres, hotels, etc., and eventually got named after them.

While several localities in the city, as we know, were named after the royals, military chiefs and important leaders, some were just remembered for housing famous structures; so much so that the surrounding areas were also being referred to by the same name.

Sadly, many of these much-loved houses of entertainment, hubs for blossoming love stories, hang out spots, landmarks, stations for great commercial activities, hospitality, and much more have either been demolished or are defunct from aeons, while some were turned into entirely different institutions.

However, despite biting the dust, these places still have a distinct spot for themselves in the hearts of Hyderabadis and are remembered to this day.

Though the younger generations of Hyderabad do not know why a certain Paradise circle is called a Paradise circle, they still call it that assuming the names comes from the restaurant that serves the delicious biryani. Not many of the younger people would know that the name has actually come from the once-popular Paradise theatre.

Theatres-turned-landmarks
Just like Paradise, many theatres across Hyderabad have given a name to the localities that they were built in. Though demolished now, Anand, Manohar and Sangeet in Secunderabad still continue lending their names to bus stops and junctions nearby.

It is a similar story with the Liberty theatre in Himayathnagar, Skyline in Basheerbagh, Milan in Asifnagar, Lata in Nampally, Prabath in Kachiguda and Satyam in Ameerpet… all of these are either defunct or demolished, but still lent their names to the bus stops or markets around them.

Another very famous theatre which was a step above the rest was the twin theatres Maheshwari-Parameshwari, which had the city’s first escalator. Now turned into a multiplex, the area around it in Kachiguda is still famous as Maheswar-Parameshwari.

Next time someone says Liberty circle, you know how the name came!

Different origins, different localities
Home to people from many origins from all over the world, Hyderabad once saw people from certain sects forming colonies for themselves across the city.

The Czechoslovakian engineers who were invited to the city by the Nizam to work in the ammunition factory were allotted bungalows built exclusively for them close to SR Nagar. The Czech left the city long ago, leaving behind the name ‘Czech colony’ which is now full of apartments and is also one of the biggest residential areas in the city.

Similarly, the Allwyn colony in Miyapur was also once home to the employees of the now-defunct electronics company Allwyn.

Another such area is AC Guards, near Masab Tank, which was where the African Cavalry Guards were stationed during the Nizam’s time. Though the African soldiers left, the area where their barracks were built is still known as the AC Guards.

While the defunct Suchitra electrical company gave its name to the locality on the Medchal highway, the shut-down Panama Godowns close to Vanasthalipuram gave its name to its surrounding area despite being defunct.

Hotels and cafes
What is now Marriott was once Viceroy and the old-timers of Hyderabad are so synonymous with the name that they refuse to call it with its new name. Bhaskara Palace, which is now Care hospital, is known to a lot of people as the hotel which once had the city’s only rotating bar.

Diamond Point in Sikh Village, Centre Point in Bowenpally have both lent their names to the areas they were housed in and the City Light hotel in Pot Bazaar, Secunderabad, which had collapsed in a freak incident now only has remains of what was once a popular hotel, but the area around it is still known by the same name.

Though Ohri’s has taken over one of Hyderabad’s most popular restaurants – Basera in Secunderabad – people still call it with the old name, thanks to the memories of date nights it gave to many a couple.

Though there aren’t any remains of the popular structures of olden days, some more historic places like Lal Darwaza (which can’t be found now) in Shah Ali Banda, a cannonball factory, Gunfoundry in Abids, which doesn’t exist anymore and the Lakdi-ka-pul, which has no traces of wood now, have all got super interesting stories to narrate even as the city keeps growing by the day, making the city of pearls a land of lost tales! #KhabarLive