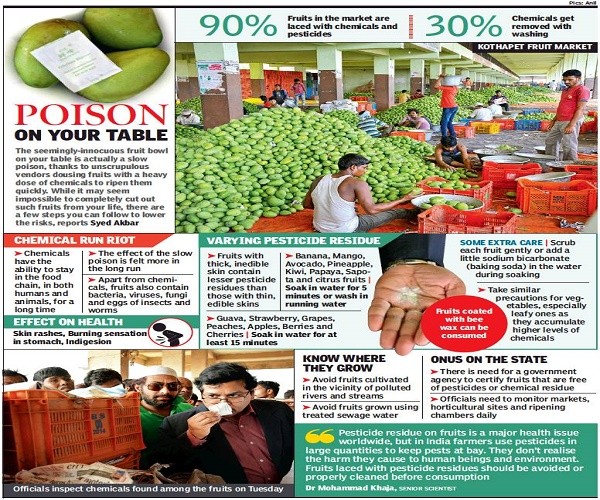 A surprise raid in Telangana’s biggest fruit market in Kothapet market in Hyderabad exposed rampant use of ethylene powder and other carcinogenic chemicals to ripen fruits.

Most of the fruits coming into Hyderabad are first dumped at this fruit market before being taken up by retailers and vendors. A chunk of the fruits are also exported to other states and countries.

State Food Laboratory officials, who conducted the raid, said they found ethylene powder packets stuffed inside boxes of mangoes to ripen them. Officials collected samples of such artificially ripened fruits and tested them. Shockingly, the tests revealed high content of calcium carbide in the fruits apart from cancer-causing arsenic and phosphorus.

During the raid, some of the officials even felt burning sensation upon opening some boxes of mangoes due to the high concentration of chemicals in them. The officials took samples of these fruits and made a note of the vendors and agents supplying ethylene packets in the market.

A scientist from State Food Laboratory said the ethylene packets found had been imported from China as pesticides to be used in crop cultivation. “Fruits should be free from harmful chemicals. Health is our top priority and we will take strict action against people flouting norms,” said K Shanker, director of Institute Of Preventive Medicine, Public Health Labs And Food Administration (Telangana).

Shanker explained that ethylene should be used only in gas form. “Ethylene can be used only as gas to ripen fruits in chambers since it gets equally distributed. If ethylene powder is used, we cannot keep tab on the concentration of the chemical,” he said.

The vendors, however, justified saying that customs had cleared ethylene powder packets. “The government should come up with a permanent solution. We have protested a lot of times as the capacity of the ripening chamber (60 tonnes) does not meet our need to ripen around 2,000 tonnes of fruits in the market,” said a vendor.

About 90% of fruits sold in city markets are laced with chemicals or pesticide residues. There is no authority to certify whether fruits sold in the market are free of pesticide. The government should immediately set up such an authority and ensure that only fruits free of chemicals are sold to consumers.

Ethylene gas allowed, but market filled with carbide-ridden fruits. Use of ethylene to ripen fruits is allowed as long as the concentration of the chemical is within the permissible limits, say experts. But the worrying fact is that the ethylene used to ripen mangoes in the markets in the city are not pure and has calcium carbide, a banned substance, in it.

The gravity of the issue is such that the Hyderabad High Court in 2015 had called fruit traders who use the carcinogenic calcium carbide ‘worse than terrorists’. Health experts too have flagged off numerous warnings about how consumption of such fruits result in gastrointestinal disturbances and dizzy spells. The arsenic and phosphorus in the fruits can lead to diarrhoea and vomiting.

“In extreme cases, excess consumption of fruits ripened with chemicals can also result in cancer,” said Dr Hari Kishan, a physician at Apollo Hospitals, Hyderguda. He advised people to consume fruits that are naturally ripened. In case people find it difficult to tell apart the good fruits from the chemicallaced ones, they can opt to buy raw fruits and ripen then naturally at home in straw baskets..

Generally, people make a mistake by selecting mangoes that look ripe and polished from the outside and get disappointed when they eat it. Naturally ripened mangoes taste pleasant even as they lack the ‘look’, but artificially ripened ones are pleasant on the outside but are sour near the core.

Even as officials have been conducting raids and reams have been published about the harmful impact of chemically ripened fruits, traders and vendors continue with the unscrupulous practice due to the costeffectiveness of the enterprise.

For one, chemicals ripen the mangoes faster, or rather make it seem as if the fruit has ripened, thus making it able for the vendors to sell their stock fast. Secondly, if vendors opt for ripening chambers, they are under pressure to sell the entire ripened stock at one go and cannot stagger the sales according to profitability.

In some other cases, farmers fearful of natural calamities and heavy wind pluck the mangoes within 70-80 days even as it takes 100-120 days for the fruit to reach maturity. This once again sparks off the cycle of artificial ripening. #KhabarLive