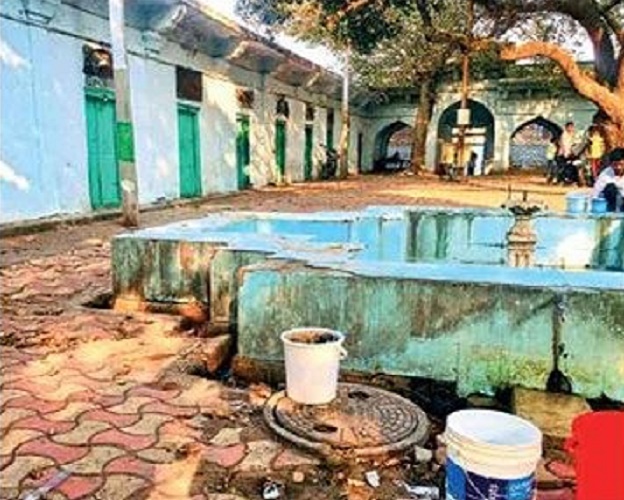 The oldest Nizam’ era hostels for all students with free boarding and lodging with teaching facilities are now in shambles. This structure is located in Hyderabad’s old city historical area need to get immediate attention.

One of the city’s oldest hostels, Darul Iqama, constructed to provide accommodation to students during the reign of the Nizams lies in shambles on one of the busiest roads in Old City. Located near Masjid E Miya Mushak at Puranapul, the structure can hardly be recognised because of its dilapidated state.

Not just the thousands of people who pass by it, but also authorities responsible for its maintenance seem to be unaware of its existence.
Darul Iqama (hostel in Urdu), was constructed keeping in view the needs of students who came from different parts of the country to study here. The structure has about 35 rooms, but has now been leased out to people running scrap warehouses, carpenters and other traders.

“This is the first hostel which was constructed in the city to accommodate students who came to study in universities here,” said Moiz Khan, a resident of Puranapul. “Since no government official is taking responsibility for its upkeep, the place is slowly crumbling,” he added.

Another resident, on the condition of anonymity, said, “Some of the rooms in the hostel are being used as betting clubs. The warehouses in the hostel have caught fire thrice till now. Authorities visited the premises when such mishaps happened in the past, but no concrete steps have been taken to increase the safety or revive the structure”.

The huge library that the hostel once boasted of is being used as a warehouse now, heritage activists said.

“The archaeological department should repair the structure before it completely falls apart. The structure as it is, is in a very bad state,” said Anuradha Reddy, co-convenor of INTACH. When contacted, officials of the Archaeological Survey of India (ASI) were not available for a response. #KhabarLive