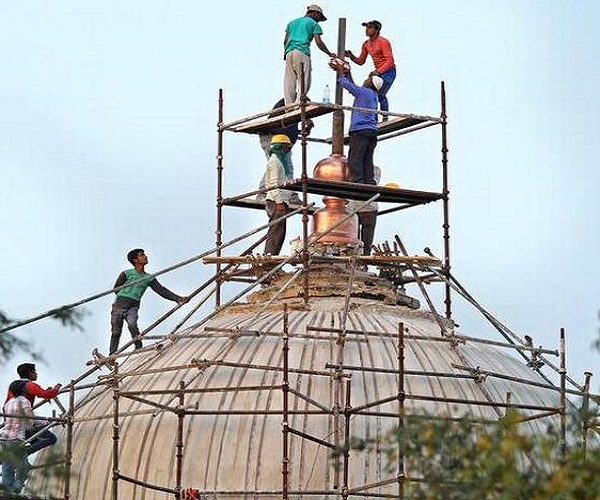 It’s the craftsmen who had kept alive the legacy of monuments. The dull rhythmic sound of a copper sheet being beaten into shape has a melody of its own. The tak-tak-tak-tak of the silver foil being beaten into slivers used in wrapping sweets and pans is predictable and heard often near Charminar and its surrounding areas. But that of copper sheets being beaten on the anvil has a different melody.

Near Chowk Masjid, the sound of copper and brass being beaten into shape and welded into vessels echoes over the urban cacophony, Azaan from various masjids and zipping vehicles. Inside an arched entrance is the small recessed room of Muhammad Saleem, one of the master craftsman and a coppersmith. “I have learnt it from my father who used to make similar objects. He used to make them in Basavakalyan. I have been making it here from the time I was a kid,” says Saleem.

He has made those tall tapering cones that adorn temples, dargahs, masjids and can be seen from great distances.

Presently, he is working on a finial; that involves cutting, beating and moulding into shape a copper sheet that weighs about 90 kilograms. “When I first mould it by hammering, it has a dull brown colour. I hammer it again to bring out the reddish shimmer which lasts longer if the copper is pure,” says Saleem about the 14-feet tall finial in 14 pieces that will be installed on Hakim’s Tomb at the Qutb Shahi Tombs Complex. The finials moulded by him have been installed in Bidar, Gulbarga, Bijapur, and many places in Telangana besides a host of sites in Hyderabad.

Incidentally, all the 14 pieces will not be crafted by him. Two of the pieces are from the old finial that used to exist in the place. So, what Saleem has made has to blend in with what was made centuries ago. In the setting sun as all the copper pieces are laid out on the ground in a row, the difference of finish on the objects could be easily detected. So can the similarity. While the pieces made by Saleem have a freshness with the beaten pattern, the older pieces look plain. “I can create a finish like that. But this will retain the pattern as well as shine for a longer period of time,” says Saleem.

It is craftsmen and metalworkers like this who have played a role in creating and preserving monuments. History is replete with examples of conquerors who carted away wealth after their successful endeavour.

When Timur conquered Delhi in late 14th Century, his assistants not only calculated the treasure they were taking with them but took away with them master craftsmen, on the orders of their master.

“I ordered that all the artisans and clever mechanics who were masters of their respective crafts should be selected from among the prisoners and set aside, and accordingly some thousands of craftsmen were bidden to await my command All these I distributed among the princes and amirs who were present, or who were officially engaged in other parts of my dominions. I had determined to build a Jami’ Masjid in Samarkand, the seat of my empire, which should be without a rival in any country; and for this reason I ordered that all builders and stone-masons should be set apart for my own especial service,” wrote Timur.

A similar thing happened when the Northern sultanates conquered the Southern kingdom of Vijayanagara in 1565. Thousands of master craftsmen rendered jobless shifted to the wealthier northern kingdoms resulting an efflorescence of architecture and craftsmanship including in Golconda that we can now see and admire. #KhabarLive