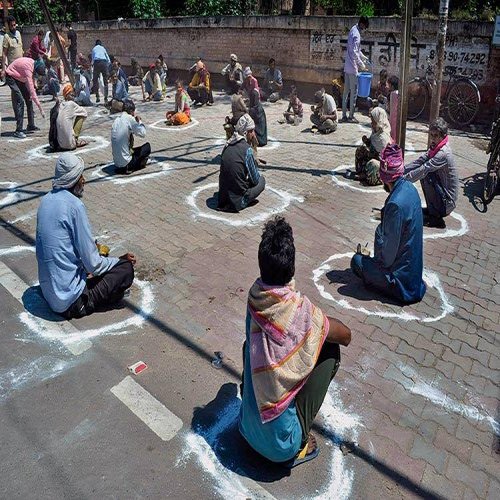 Many people in Hyderabad are started starving due to non-availability of ration and food in remote areas. Several families, residing as migrant workers or poor without ration cards and a section of lower middle class people applied for ration card and not yet received since years are facing hunger during this lockdown period.

As a case of Syed Mihraj is an auto driver and since the lockdown began, he has been sitting idle at home. “I have a family of five members to feed and we have run out of essentials at home. I have not been earning for the last 15 days,” says the auto driver, whose family does not have a ration card.

The residents of his locality at Shaheen Nagar in Bismillah Colony of Hyderabad stepped out during the lockdown, demanding they be provided with essential goods as many in the locality may run short of supplies soon.

The Telangana government has promised 12 kilograms of rice through the Public Distribution System (PDS) to those who have ration cards, but is yet to take a call on the distribution of essentials to those without a ration card.

“There are over 40 families in my locality who don’t have ration cards, including my family. I had applied for a ration card before the Telangana state elections in December 2018,” recalls Syed. However, he has not heard from the state Food and Civil Supplies Department.

Like in the rest of the country, the list of Public Distribution System (PDS) scheme beneficiaries in the state was last updated in 2017. Since then, as estimated, 1.30 lakh persons have applied for ration cards in Hyderabad alone. “There are over 77,000 pending ration card applications as of January 2020 in Hyderabad. Every district in the state has application pendency, with total running into a few lakhs,” an official with the department told #KhabarLive.

Shiek Chand Pasha, another resident of Shaheen Nagar, said that the residents had approached their local corporator for assistance. “The corporator said he cannot do anything and asked us to speak to the Food and Civil Supplies department. We cannot even step out of our locality, then how will we go to their office with a grievance? Most of the residents here are labourers, some involved in construction and artisan work. Since the lockdown, our earnings have completely stopped.”

At Miyapur slum in Hyderabad, Yuvaneswari is working closely with slum dwellers and civic authorities, ensuring a steady supply of essentials to these families. “Out of the 222 families we provided essential goods, 200 of them don’t have ration cards. We later identified another 103 without ration cards,” says the activist.

“When people apply for a ration card, there is a verification process, which consists of different levels. It is a time-consuming process,” he said.

Officials say that the ration card applications are still in pending as the applicants are either no longer living at the given address or are not in the city at the time of the verification.

Delhi government, on the other hand, had identified 6.5 lakh persons with pending ration card applications. Those without ration cards are being issued e-coupons to avail rations. #KhabarLive