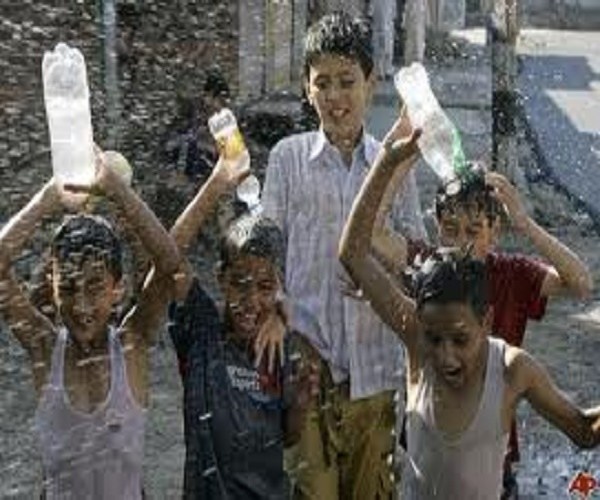 Hyderabad recorded a temperature of 43.3 degrees C on Tuesday, the highest maximum temperature recorded in the last three years. Night temperature was about 28.4 degrees C. Forecast for Wednesday is similar with chance of thunders and lightning only towards dusk.

India Meteorological Department (IMD) and Telangana State Development Planning Society (TSDPS) cautioned citizens against direct exposure to sunlight throughout this week as heatwave will continue to prevail in the twin cities and the rest of Telangana.

Day temperatures are likely to be 3 to 4 degrees above normal. While temperatures in GHMC area will be around 40-43 degrees Celsius, Adilabad, Nizamabad, Karimnagar, Warangal, Nalgonda, Khammam, Kothagudem, and Mahabubabad are likely to have the the maximum temperatures 43-46 degrees C and could reach up to 47 degreed C.

ALSO READ:  Now, Relief For Indian Techies As US Says No Change In H-1B Extension Policy

On the other hand, Telangana continues to reel under heatwave conditions in the last leg of summer, and on Monday, the State matched its highest ever temperature recorded in the decade during May.

According to data from the India Meteorological Department, Ramagundam recorded the highest temperature of 47.2 degree Celsius, which is the highest in the past decade, and matched the temperature recorded on May 26, 2010, also at Ramagundam. Temperatures recorded at other centres too have spiralled to far beyond the mean values for the respective locations.

Across the State, the temperature was two to five degree Celsius above normal.

Night temperatures too hovered at 32 degree Celsius at quite a few places, including Adilabad, Bhadrachalam and Nizamabad, while crossing 30 degree Celsius at Hyderabad, Khammam, Mahabubnagar and Ramagundam. #KhabarLive