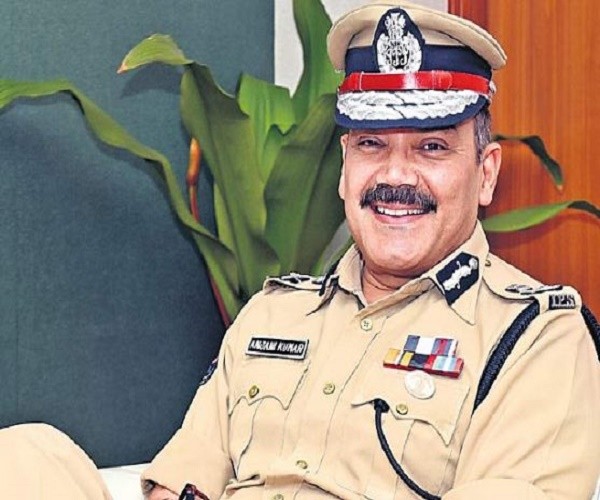 “No one should be condemned as eternally bad. It depends on how we can motivate and mould a deviant behavior into an acceptable one,” says Hyderabad Police Commissioner, Anjani Kumar.

Impeccable in his manners, and unflinching in his commitment to check crime, Anjani Kumar, however, calls for certain humaneness with criminals. “No one should be condemned as eternally bad. It depends on how we can motivate and mould a deviant behavior into an acceptable one,” says Hyderabad Police Commissioner, Anjani Kumar.

From Patna to Delhi to taking over the reins of policing in the happening city of Hyderabad, it has been quite an eventful journey for Anjani Kumar. A long stint that started with the unified Andhra Pradesh took him to different parts of the State with postings that were challenging before he came to occupy the seat of city police chief.

He comes across as a man with soft manners, courteous and a gentleman to the core. Anjani Kumar belies common perceptions about men in uniform and believes in establishing a direct rapport with people. “I have made my contact number easily available and I give top priority in meeting complainants and petitioners at every stage,” says the 1990 batch IPS officer.

The strength and weaknesses of the police set up lies in how close the bonding that the community and those who represent the police, share. The most important virtue or requirement of any police officer is how close their association is with the community, he says. “On many occasions, I may not be able to solve their problems. But, I have to reassure them that I am together with them,” he points out.

A major change that he has ushered in for the policing is usage of social media, which he considers the best bridge for direct connect with the community. His communication with the community has also been in the form of audio messages and video clips to disseminate information on everything from traffic guidelines to crime advisories, which get widely circulated.

“In a very short time, social media has touched the mind and heart of large sections of our population and turned out to be a very effective vehicle to reach out to them,” remarks the police commissioner.

Born and brought up at Patna, Anjani Kumar had his schooling at St. Xavier’s School, considered to one of the best schools in Patna. The school boasts of having produced more than 50 IAS and IPS over the decades. Taking the uniform had been his aspiration as a child which he fulfilled after graduating from University of Delhi in 1988.

The university gave him the right environment to learn and helped him prepare for the civil services examination. Studies and preparations did not disturb his passion for sports and other extra-curricular activities as Anjani Kumar excelled in basketball, football and cricket apart from winning laurels in quiz and such events.

At Sardar Vallabhbhai Patel National Police Academy, the dashing probationer continued his success streak by winning awards for best swimmer of the batch and excelling in martial arts and firing.

“My professional journey started 28 years back and took me to different parts of the unified AP with a series of postings. Subsequently, I realized the challenges. Overcoming those challenges brings a lot of job satisfaction,” he reckons.

Along the line of service, he won several recognitions including President’s Police Medal for Distinguished Services, Indian Police Medal for Meritorious Services and also Internal Security Medal for working in naxal affected areas.

One of his more visible moments in the spotlight came when he was given the task of planning security arrangements and liasioning with the US Secret Service for the visit of US President Donald Trump’s daughter Ivanka Trump during the Global Entrepreneurship Summit (GES) in the city.

But then, the senior cop had deftly handled a similar task earlier too during the visits of the former US Presidents, Bill Clinton and George W Bush in 2000 and 2006 respectively.

“Job satisfaction that police service gives is absolutely immense and with confidence I say that if given another opportunity, I would like to become a cop again,” smiles Anjani Kumar. It’s never a smooth sailing though. The challenges have been many, both internally and externally. There have been moments of extreme anxiety, often disappointments and many a happy occasions.

“Most of my initial postings were in naxal affected areas and I had to device many operations which had large elements of risk and danger. The safety and security of my men remains my responsibility and those operations gave me a lot of anxious times,” he recalls.

However, disappointments did not deter him. Kumar says he grew up few miles away from where Gautam Buddha attained his enlightenment. “I believe firmly in Buddha’s saying that the cycle of happiness and disappointment is an integral part of one’s life journey”. Look back at his career, Kumar says he can recollect many instances where he did not get due support within and outside the department. “But, now I can ignore them with a small smile,” he says.

He also believes that the young generation in the department should not feel hurt when things fail to go their way. “You may feel lack of fair play, but don’t let that affect you. You can never get or be part of a dream team or find a perfect situation. I like to tell my brothers and sisters in the department that our efficiency lies in how well we handle the imperfections,” he advises.

On punishment versus reform, the city police commissioner says punishment can never be a good goal as he believes in the goodness of every human being. “No person on earth can be condemned as eternally bad. Give a chance and help them become better citizens,” he suggests.

His family has been a pillar of strength for Anjani Kumar throughout his career and he says, “I owe my success to them a lot”. His wife Vasundhara is working with the Union government as Additional Director General of Foreign Trade in the Ministry of Commerce. His elder son has completed his Masters in Engineering and lives in Canada while his younger one, a IIIT-Hyderabad graduate is working in an MNC here.

Given his handsome and photogenic looks, did he ever consider entering entertainment world? Anjani Kumar waves off the query with a guffaw,“I have no time for anything but policing”. #KhabarLive