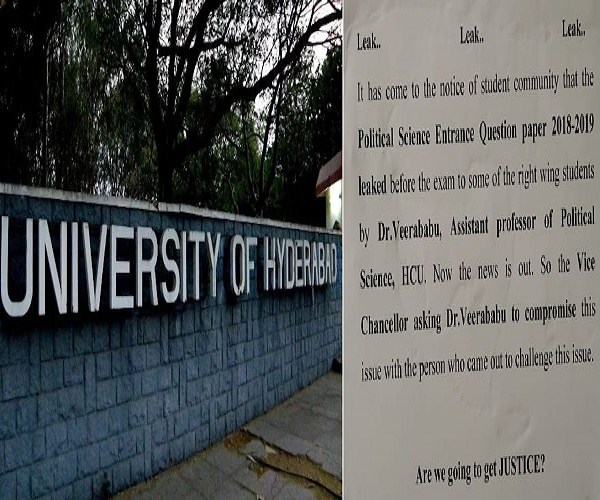 An assistant professor in Department of Political Science of Hyderabad Central University has allegedly leaked a question paper of university’s Ph.D. entrance examination 2018, favoring one person affiliated to ABVP students’ group. This news is being circulated on social media among the university students, and posters carrying this message have been pasted at several locations inside the university Campus.

Several concerned students have staged a protest last week demanding an enquiry into the matter.

The posters allege that the Political Science Entrance Question Paper 2018-19 was leaked before the exam to some of the right-wing students by Dr. Veerababu, assistant professor. A poster also alleges that the vice chancellor is asking Dr. Veerababu to compromise with the person who has come out with this revelation. The anonymous posters are titled “Leak Leak Leak” with the question written at the bottom: “Are we going to get Justice?”

Devesh Nigam, Controller of Examinations, denied any malpractice in the examination and questioned the authenticity of the posters. “The exam in question was conducted eight months ago on June 5, 2018, and the allegations made are beyond imagination,” Nigam told Newsclick over the phone. He added that there is no evidence mentioned on the posters, the posters have any signature or authenticity.

A student from the Political Science Department, who wanted to be unnamed, told Newsclick that the department had constituted a committee to look into the matter.

When asked about constitution of a committee for probing the leakage, Nigam said that his office is unaware of any such committee.

The head of department remained unreachable.

The professor in question, Dr. Veerababu had joined the university in 2017. According to sources, Veerababu was a member of right-wing students’ group ABVP during his student life in Osmania University.

On the other hand, the UOH constituted a Committee to Investigate Allegations That PhD Entrance Exam Was Leaked. A committee has been set up to enquire into allegations that the University of Hyderabad’s (UOH) political science department’s PhD entrance exam for 2018 was leaked to a section of applicants.

An anonymous posters were put up at several locations in the Hyderabad University (UoH), claiming that assistant professor Veerababu leaked the entrance exam paper to “right wing students”. Sources within the political science department confirmed to #KhabarLive that a committee has been set up to investigate the allegations.

The poster also claims that the vice-chancellor has asked professor Veerababu to “compromise this issue” with the person who has made the allegation.

Beginning last week, students have staged protests, demanding an enquiry into the matter. Students have also raised the issue on Facebook groups and on other social media platforms.

The university’s controller of examinations Devesh Nigam denied malpractice and questioned the authenticity of the posters. He told #KhabarLive, “The exam in question was conducted eight months ago on June 5, 2018, and the allegations made are beyond imagination.” He drew attention to the fact that the posters do not provide any evidence and that their anonymous nature brings into question the authenticity of the allegations.

#KhabarLive was unable to contact assistant professor Veerababu. The university’s spokesperson Vinod Pavarala was unavailable for comment. A questionnaire has been sent to the department’s head. The report will be updated when the response is received. #KhabarLive