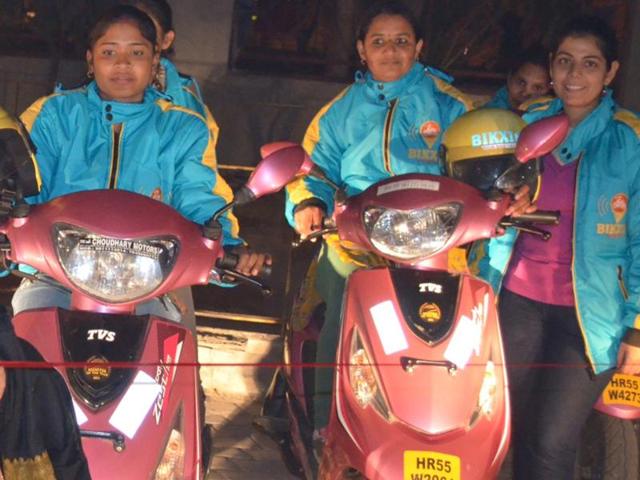 Taxi aggregators provide bike taxi services only in a few pockets of Hyderabad, one of the few cities in the country to allow bikes to obtain a commercial licence. The demand for the service has spiked especially among young women commuters after it was introduced to the city in 2017.

However, some bike taxi drivers are cautious and nervous to host women commuters.

When Sai Kiran, a 21-year-old bike taxi driver, was asked why he was nervous about ferrying women on his bike, he says, “If ever the bike loses control due to a speed breaker or pothole, I could land up in trouble. What if she gives me a low rating or even files a complaint?” Kumar, an ITI pass out, took to Uber bike taxi to earn extra bucks.”The incentives were good initially but slowly they began decreasing. Even the commission we earn is better than that of cab drivers,” he added.

“I am shy and have never taken any woman other than my wife on the bike,” says Abdul Sattar, a bike taxi driver who has started riding for a taxi aggregator just a fortnight ago, “When I have a lady customer on my bike, I ride slow and carefully while applying breaks what if the lady misunderstands a sudden break?” Sattar pointed out. However, on the other hand, female commuters prefer a bike taxi to cab for obvious safety reasons.

“If I give a shout people can hear me easily on a bike, which is not the case inside a car. Also the bike fares are cheaper when compared to cabs,” said Madumitha Ramachandaran, a data researcher working with a technology firm in Hitech city. Moreover, female commuters claim that the drivers are often surprised to see them opting for a bike ride with a stranger.

“If ever the bike goes over a speed breaker, the bike driver will slow down and apologise. Their nervousness is not that hard to miss,” says Mary John, working with a public relations firm in Banjara Hills.

Apart from women, children too take bike taxis for ride. “I once got a booking from a customer who turned out to be a girl studying in seventh grade,” said Kumar. “Most of the people who opt for the bike taxis are college students for short commutes.

The low rates are attractive for them,” he added. Uber and Ola operate the bike taxi service only in selected parts of the city like Hitech City, Madhapur, Nizampet, Gachibowli and Kothaguda. Ola has expanded the service to Ameerpet-Miyapur stretch based on the demand of commuters.For Uber’s bike taxi service, UberMoto Hyderabad, is the second city to have started the service and Uber claims that they have a UberMoto booking for every 18 seconds.

The commercial number plates that allow bikes to be driven as a taxi was granted permission to operate in the city legally only in 2017. #KhabarLive