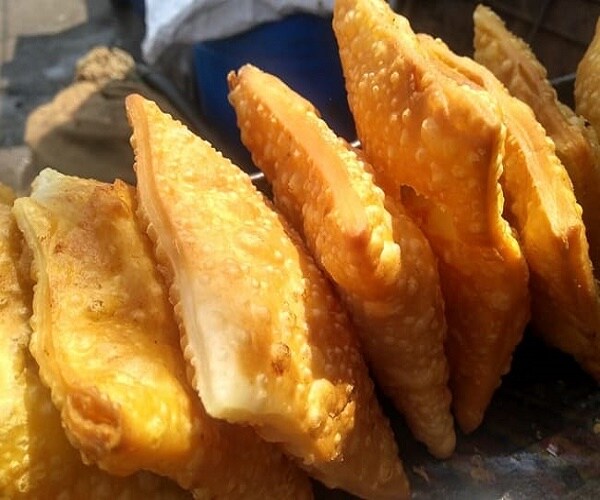 Biryani, haleem, kebab, sheer khoma and lukhmi – these are some of the most common food items that appear in any traveller’s must-to-have list when in Hyderabad. Biryani and kebab remain a staple, and haleem which was earlier a typical Ramzan delicacy, is now available in every restaurant that serves Hyderabadi food.

However, though people sing paeans about mutton kebabs served with lukhmi during weddings, a hunt for this authentic Hyderabadi starter can leave many disappointed. Once found on the table of every Iranian café, this meat fritter is now slowly disappearing from the restaurants of Hyderabad.

Our hunt for lukhmi begins at the famous Madina restaurant near Charminar. The hotelier smiles faintly and recalls how lukhmi was prepared until a few years back at the hotel, and then directs us to Shadab, from where we are sent to Nayab, another hotel famous for its non-veg breakfast items.

Our search finally ends at the Bismillah Hotel at Chaderghat where we spot lukhmis, fried in steaming hot oil, being transferred into huge trays. The hotel is slightly dingy and is teeming with a crowd waiting for lunch parcels. We occupy seats in the front and it’s not long before the waiter places in front of us four square-shaped meat fritters on a steel plate, along with cups of milky Irani chai.

A bite into the crispy layer first and then the meat minced with onions and spices, we are happy that our 3 km walk has after all not gone futile. Lukhmi tastes similar to samosa, but with lesser masala and is a lot crispier. It is spicy, tangy and bite-sized, hence the name ‘lukhmi’, which means ‘morsel’ in Urdu.

While munching on the hot snack, one can’t help wondering why this delicious, authentic Hyderabadi snack is rarely found at other popular food joints in the city today.

Lukhmi has been a traditional snack popular in Hyderabad from the time of Nizams. Earlier made with beef or minced mutton (kheema), there are vegetarian varieties too available now. Speaking to #KhabarLive, Mohammad Shafeeq, owner of Bismillah Hotel, says that the hotel now prepares only a batch of 25-30 lukhmis every day as there are few takers for the snack.

“While we are able to sell at least 100 samosas every day, we make only one batch of lukhmi in the morning. Mutton lukhmi is tasty but also expensive. Who would buy snacks for Rs 20 in this part of the city, while samosas are available for a much cheaper price?” Shafeeq asks.

Lukhmi is a regular at Muslim weddings in Hyderabad’s Old City and is said to be best served with seekh kebab.

“The lukhmis eaten with kebab do not have a stuffing. Only the outer layers made of maida are fried along with spices,” Shafeeq says, adding that the vegetarian variety is equally popular and is more common in hotels now.

However, Mohammad Yonus, owner of Seven Star Hotel located around in the same street, chooses to differ. “How does vegetarian lukhmi even qualify to be a variant of the same dish? It’s just samosa made a little crispier,” Yonus says.

Yonus speaks while he is kneading the dough and flips the first batch of lukhmis which are already being cooked on the stove. According to him, the snack became popular during the reign of the Nizams in Hyderabad when chefs would experiment to prepare the best dishes in order to impress the ruler.

Yonus says, “Lukhmi was originally a meat snack. It was the Nizam’s favourite and became a ubiquitous food item in Hyderabad. It was found at all kinds of celebrations – it was a perfect starter for weddings. But now the popularity has largely dwindled – blame the changing demographics or people’s love for Chinese and other fast food.”

Yonus sells only egg lukhmis at his hotel. When asked why he doesn’t make meat lukhmis, he points out that egg lukhmis are preferred by a lot more people that mutton, which is costlier and consumed lesser by the locals.

“We started this hotel around 40 years back and there has not been a single day when we stopped making lukhmis. But we do need to evolve with the tastes of people and rising costs which has made meat less preferable. Meat lukhmis are now mostly confined to celebrations at home and marriages,” Yonus says.

Lukhmis are crispy and the texture is considered perfect when you can break the small square shaped fritter easily with two fingers. According to Shafeeq, not all restaurants can prepare lukhmi to this perfection.

“To get the texture right, we first need to ensure that the maida is properly kneaded. It should be firm but elastic. The meat should be thoroughly cooked and mixed with spices. The dough is then kneaded out into a larger rectangular roti into which meat is put in small pockets, covered by another larger roti. This is finally cut into smaller squares, along with the kheema pockets,” Shafeeq explains.

The edges are then closed with a fork and fried in oil for about 20 minutes until the savoury layer turns golden brown in colour. While most lukhmis are square-shaped, commonly called the chaar koni, there are also tri-cornered ones similar to samosas.

Speaking to #KhabarLive, Sankalp, a Hyderabad-based food blogger, says that lukhmis have now recovered some of the lost popularity in the city, thanks to a few restaurants that are reviving interest in lost recipes. “Alpha Hotel and Rio have vegetable lukhmis while in a more elite environment, there is Zaiqa-e-Hyderabad and Soda Bottle Opener Wala which serve the same,” he adds. #KhabarLive