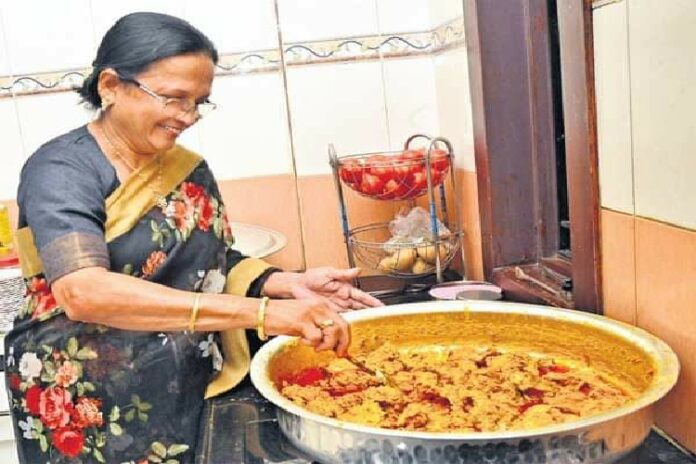 In Punjabi cooking, the base for most dishes is tomato. In Hyderabadi cuisine, onions, ginger, garlic and curd are the base in most dishes. Nahari (a light soup made of sheep trotters and tongue) is a typical Hyderabadi delicacy. This dish is cooked on slow fire the previous night. Chawal Ki Khadi is another Hyderabadi dish that is quite famous. But instead of gram flour, we use rice flour while making the khadi.

Hyderabadi cuisine is also famous for its kebabs (meat pieces or minced meat cooked in different styles). Baghare Baigan, Mirch Ka Salan (chillies in a creamy gravy) and Ambada (a mutton dish) are other famous Hyderabadi dishes. Chugar is a dish made of mutton, chicken and other vegetables. Baghare Baigan is a dish made of brinjal, peanut, coconut, til seeds and tamarind pulp.

Hyderabadi cuisine also boasts of a fair number of sweet dishes. Khubani is a sweet dish made of apricots. Double Ka Metha (a bread and nut pudding and note the reference is made to double roti) is a dish made of Khova, almond paste, saffron and sugar. We fry the bread pieces first and then cook it in khova and add the badam paste to it.

Hyderabad is famous for its history, its culture, its warm people and something that has always had the greatest importance in their lives – their food. Food is never just to fill their stomach or about its nutrient value. For a Hyderabadi, food is about comfort and pleasure – a passion that has made their city famous.

People who are not comfortable with a little spice in their food will miss out on the unique cuisine of this princely state, nurtured by Sultans who were among the richest rulers of their time, with all the treasures of the Deccan at their disposal to fund every whim and indulgence they fancied.

The city was the centre of many innovative culinary techniques devised by royal chefs (Khansamas), who were highly regarded by the rulers and famed for their skills in conjuring up luxurious dishes fit for the Deccan nobility. The food was called Ghizaayat and the recipes were a closely guarded secret, religiously maintaining the authenticity of the past.

In Deccan medieval cuisine, banquets were common among the aristocracy. Multiple courses would be prepared and served in a style called Shahi Dastarkhan (A long cloth laid on the floor or a low table called chowki, on which food and dinners plates were placed), with cotton mattresses for squatting and bolsters for the backrest.

People were careful not to step on it or go over it, instead they went around it to reach the other side. Food was generally eaten by hand, shared by both commoners and nobility. The food was mostly meat oriented, being grilled and fried in a tandoor. The curries were richly seasoned and flavored with exotic spices. Fruits were preferred rather than dessert, after the main course.

Once the meal ended, black tea called Kahwah was consumed, with lime or elaichi added to digest the rich food. Today it’s called Suleimani Chai. The cuisine varied greatly according to the seasons and festivals.

This cuisine was first developed during the rule of Sultan Quli of the Qutb Shahi dynasty. The rulers promoted their native cuisine, but encouraged the best be drawn from other food traditions, to make it the most luxurious and delicious in the land – be it the native Telugu or Andhra food, or the dishes from Turkish, Mughal, Iranian and Marathwada cuisines, which were all sources of inspiration in the evolution of the royal Hyderabadi cuisine.

The main ingredients that separate these recipes from North Indian cuisine are the use of red chillies, coconut and tamarind, peanuts, and sesame seeds. Chicken and mutton are among the most loved meats in this cuisine. It comprises a broad combination of wheat, rice and meat, along with a masterly use of herbs and naturally aromatic ingredients like tomato, saffron and spices.

The cuisine emphasises the use of ingredients that are carefully chosen and cooked in the right degree and time. Utmost attention is given to picking the correct spices, meat, and rice. Therefore, an addition of a certain herb, spice, condiment, or a combination of these add a distinct taste and aroma. For example, Murgh do Pyaaza is so named because Onion (‘Pyaaz’) is added to the dish twice, in different variations.

Some other renowned Hyderabadi dishes are:

Traditional utensils made of copper, brass, and earthen pots are used for cooking. All types of cooking involve the direct use of fire. Hyderabadi chefs believe that the key to good cooking is patience, ‘itmenaan se’. Slow-cooking or Dum (steaming over coals), is the hallmark of Hyderabadi cuisine and had its influence from the Dum Pukht method used in Awadhi cuisine (sealing the dish with dough and gently simmering the ingredients over a low fire, to increase absorption of spices).

The modern cuisine evolved during the time of the Nizams in the mid-17th century, who ensured that most of the foreign food had been improved to suit their culinary preferences, resulting in a unique and improved derivative cuisine, be it the pulao (Iranian pilaf), the Biryani (Turkish) and Haleem (from Arabic harees).

The Nizams served some 26 varieties of biryanis for their guests. Til ke chatuni is drawn from Arabic tahini or sesame paste, Persian dried lamb with beans is modified with dalcha, tanduri naan of the Uzbeks (central Asia) created Sheermal. Most of the modern day desserts in Hyderabadi cuisine were invented during the time of the Nizams, like the Badam-ki-Jhab (marzipan), and Dil-e-Firdaus (a rich milk based sweet). Often, for formal occasions, the food is garnished with warq (a fine, silver leaf created by prolonged hammering and flattening of a small piece of silver).

Today, Hyderabadi cuisine rules throughout the Deccan, which includes the Telangana, Marathwada and Karnataka-Hyderabad region and further north in India, and is not confined to Muslim tastebuds alone. Known for its aroma and subtle use of spices, the cuisine also contains city-specific specialities like:

Other dishes that have stood the test of time and become world-famous are Hyderabadi Haleem, Paaya, Qubani ka meetha, Baghara Baingan and Pathar ka Gosht.

Pista house is one place famed for its biryani and haleem. Paradise Hotel has won many awards for its Biryani. Bawarchi is a cheaper option but also popular for biryani and kebabs. Shehran, Grand hotel, Niagara, Paradise, Shadab, Ohri’s, Kolhani, Kamat, Taj Mahal, Swathi tiffins, etc. are a handful of other established eateries.

In Hyderabad, you must also try the Irani Chai, Rio Samosa, and the world famous Karachi Bakery’s fruit biscuits. Irani Chai (Tea) is believed to relax you at the end of a busy day’s work. Its famous in the Old City area of Hyderabad. Osmania Tea biscuits are very famous too.

They are named after the Nizam, Mir Osman Ali Khan, who is said to have relished them. Hyderabad is as much about haleem as it is about biryani and baghara baingan. Haleem is made in many places, but the one in Hyderabad is unique in taste and flavour. As for the baghara baingan, this brinjal dish is probably the only one of its kind – heavily spiced and rich. Only the Nizams could ensure that the humble baingan would turn into a delight forever!

Hyderabadi Cuisine has different food for different events, be it banquet food, or for weddings and events, festival food and travel food. The category to which the recipe belongs itself reveals its characteristics – the time required to prepare the food, its shelf life, taste, etc.

Hyderabadi Haleem In the month of Ramzan, whether you are a Hindu or Muslim does not matter, because at this time of the year, all Hyderabadis eagerly await the steaming, fragrant Hyderabadi Haleem sold at every nook and corner, especially places close to masjids – a delightful treat which you can buy from a large handi, in which the concoction cooks all day. All the little shops which dish out regular food set up the handi stand a few days before the festival of fasting begins. Haleem is also a hors d’oeuvre on occasions like weddings, festivals, etc. Haleem means patience. It often takes an entire day to prepare this high calorie dish.

Hyderabadi biryani This is a well known celebration meal for Hyderabadis, a divine combination of meat and rice. The Hyderabadi Biryani has become ubiquitous all over the country. There are basically two types of biryani – kacchi (Raw meat and rice cooked together) and pakki (cooked meat layered on to cooked rice). There are many varieties of this dish – the Hyderabadi Dum Biryani, Zafrani Biryani, Kache Gosht ki Biryani and Kheeme ki khichidi. Besides beef and mutton, this dish is also available in chicken, fish, egg, paneer and vegetarian versions. Paradise, Bawarchi, Hyderabad House and Pista House are some of the famous places in Hyderabad that serve exceptionally delicious biryani.

As told to #KhabarLive,
Kunwar Rani Kulsum Begum belongs to the Salar Jung Nawab family. She is also a speciality chef of Hyderabadi cuisine at the Maurya Sheraton, New Delhi. #KhabarLive #hydnews