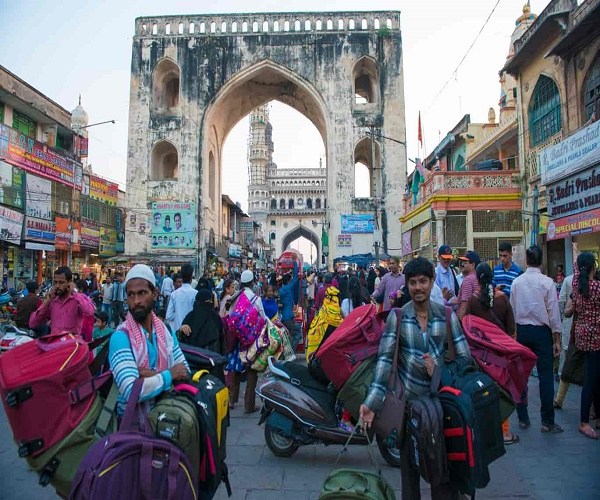 This is a rare sight…the kind one has never envisioned or expected to see. That in February, Hyderabad, the city that should have left behind the chill to make way for pleasant days, the only respite before summer comes bright and shining in all its repressive glory: is displaying a never before trait. The evenings send shivers down the spine and the nights continue to be cold and unyielding.

The city that has always braved through the hit and miss winters with one odd sweater that has been pulled out of the innermost corner, dusted and worn only when it’s absolutely necessary, probably during a very cold morning or on a drive back home, is donning a new avatar. The scene is almost true for the rest of AP and Telangana as well.

You see people draping scarves, shawls, sweaters, cardigans covering themselves or rather rolling themselves into woollen cocoons made out of random winter wear that they never realised they owned. A city that comes alive in every kind of cotton – sarees, dresses, designer tops, handloom, mill-made in beautiful summery colours in the months of April and May that they begin to flaunt through the almost imaginary non-existing spring is now covered in the greys of woollen.

People here have never learnt to be fashionable and warm; they would rather be stylish and cool. This is so unlike the north of India where come winter and the long coats, furry leather jackets and uber cool cardigans are donned with flourish. And then there are these beautiful scarves of all kinds, shapes and materials that add to the style quotient.

This takes me back to one trip during the peak of winter to Amritsar that had journos coming from all over India. And looking at the kind of woollens they wore it was easy to tell if they were from South or North India. That said, we are extremely laidback during monsoons too.

I have been doing unofficial survey and can safely proclaim that eight out of 10 homes in Hyderabad own a single common umbrella, which is usually the family umbrella and 5 out of 10 times the umbrella must be lying in one corner and sometimes does not survive the neglect. On a rainy day is when people remember how important an umbrella is. In fact, one sees more umbrellas being used during summer than during monsoons.

Well Summer is surely coming and with it will come the sweat and grime. Hence make the most of the extended cold weather and while at it ask your Delhi cousin to get for you one of those super cool (warm) jackets. It will come by you on yet another wintery day. #KhabarLive