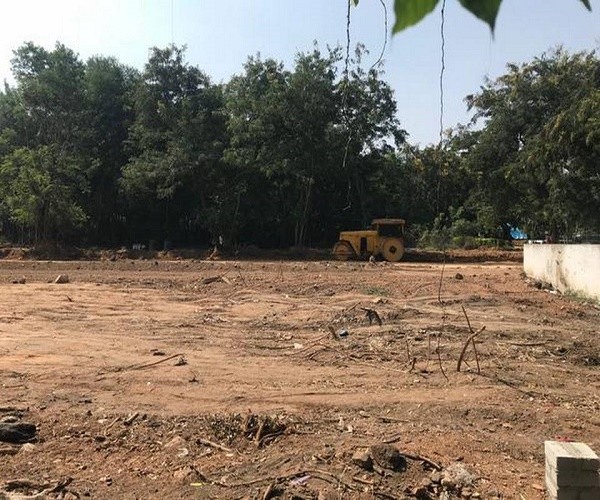 Park to be merged with the landscaping project for Qutb Shahi Tombs complex. Earth movers, road rollers and heavy duty trucks have taken over a portion of Deccan Park at the foothills of Golconda Fort. Inaugurated just over a year ago with much fanfare, the park is back to being a decrepit shell it was for nearly 15 years before inauguration.

“This is going to be a parking space for both the Golconda Fort and Qutb Shahi Tombs complex. It will be a 180-metre-long space where 20 buses, 80 cars and 200 two-wheelers can easily be accommodated. Even the canteen will go,” says an official of Quli Qutb Shah Development Authority, which administers the park.

“We are not doing much activity in the park. Only plants are being watered and we are trying to maintain the lawns,” says the official.

The park would be merged with the landscaping project for the Qutb Shahi Tombs complex. The parking space would be a welcome change as bigger tourist buses find it difficult to navigate the S-shaped entrances of both the Banjari Darwaja as well as Makki Darwaza of the Golconda Fort.

According to officials, the landscaping is part of the Swadesh Darshan project that received budgetary nod of ₹99.42 crore in 2017. It is scheduled to be completed in 36 months to create a seamless tourist experience of Qutb Shahi Heritage Park, Paigah Tombs, Hayat Bakshi Mosque and Raymond’s Tomb.

While currently the Deccan Park and Qutb Shahi tombs complex have separate entrances, the transformation would lead to a single entrance. “The boundary wall will snake behind the masjid that is used by the locals so that tourists and visitors do not enter that space,” says the official.

“We are rapidly moving on with the project. It also involves creation of an interpretation centre besides other tourist amneties. Contrary to belief, the walking space for morning walkers will not shrink, but expand by about 600 metres,” informed N.R. Visalatchy of Telangana Department of Archaeology and Museums.

The Qutb Shahi Tombs restoration, being carried out by the Aga Khan Trust for Culture, is going on apace. Currently, the Hayat Bakshi Begum Tomb teems with workers as they go about the task of meticulously removing the detritus of years.

Unlike work in the earlier phases of restoration where tin sheets were used to cordon off the workspace, it is only a cautionary tape and a guard who shoos away visitors and tourists. The visitors then stop and watch with awe the grand tomb of the Golconda princess, who became the queen as well a queen mother. #KhabarLive