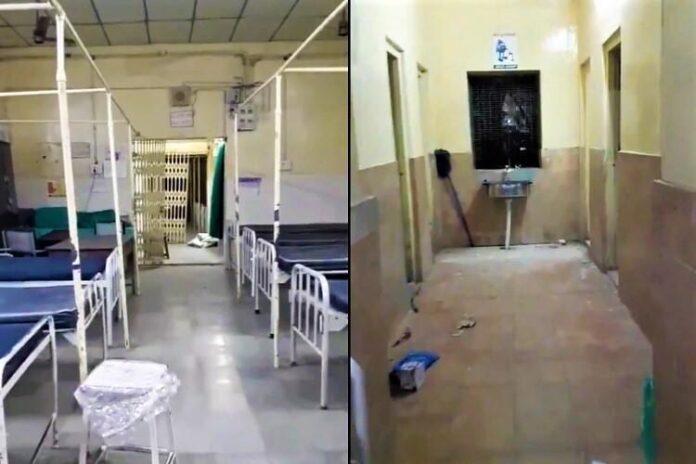 At this time of pandemic, the entire country is alert with Covid-19 positive patients, Hyderabad’s Fever Hospital is showing no concern towards Coronavirus positive patients isolation ward with completely Unhygienic conditions, no doctors, no support medical staff and no surveillance towards patients. Is this government’s apathy or negligence.

A patient who has tested positive for the coronavirus in Hyderabad has highlighted the pathetic conditions at an isolation ward of Sir Ronald Ross Institute of Tropical and Communicable Diseases, also known as Fever Hospital in Hyderabad.

The 39-year-old woman, who has been identified as ‘Patient 35’ by the Telangana government, had a travel history to Germany and is a resident of Chandanagar in Hyderabad.

While a government press release states that the “patient is stable and admitted in designated hospital,” as of Wednesday afternoon when #KhabarLive spoke to her, the woman was yet to be shifted to state-run government hospitals where those who test positive for the coronavirus are being treated.

In a video published on Twitter, the patient highlights the condition of the isolation ward at the hospital, where she and her husband were admitted. “There is no water and no medical staff or doctors in sight. Some of the windows are broken, which allow mosquitoes and insects to enter the ward and the toilets are unhygienic,” she says.

“There are huge drains outside the window as it is the backside of the hospital…I haven’t got any treatment till now. No one has talked to us, no one has informed us properly. I don’t know what to do in this situation. How to get help and get myself treated because if we stay here like this, I will die,” she is heard saying in the video.

Speaking to #KhabarLive, the woman said that she developed symptoms on March 22 and called the 104 helpline.

“They advised me to take paracetamol and go to sleep. They said they will arrange for an ambulance on March 23, but that did not happen. After making a few calls, someone from the Greater Hyderabad Municipal Corporation (GHMC) arranged an ambulance and brought us here at 12 pm,” she said.

“They gave us lunch on that day and a junior doctor came at around 2 pm and took information on my symptoms. The ward we were initially admitted to, was much better. On the evening of March 23, they took samples from me and my husband,” she added.

That same night at 11 pm, the present ward was opened and both she and her husband were shifted here. “It seemed like an abandoned facility,” she said.

On the afternoon of March 24 (Tuesday), the woman was informed that she had tested positive while her husband had tested negative.

“At around 12 or 1 pm on Tuesday, they said that I would be shifted to the Chest Hospital for treatment. But, it has been 24 hours and there has been no treatment that I have received since,” she says.

She further claimed that no drinking water was given to them until Tuesday morning, when some sanitisers were also sprayed in the ward.

“We are not asking for some special treatment but they should ensure minimum hygiene and a doctor who comes frequently. It’s a larger issue. We will not be the last people suspected to have COVID-19, who will be kept here. At least for others, they should make better arrangements. We can’t take to Twitter each time for such a basic demand and hope that someone listens,” the woman said.

Speaking to #KhabarLive, Dr K Shankar, the Superintendent of Fever Hospital, said, “The beds at Chest Hospital and Gandhi Hospital are currently full. We are getting hourly updates and we will shift the patient as soon as there is a vacancy.”

“We have isolated both of them in a separate room. As her condition is stable, we have begun treating her. We are giving her symptomatic and supportive treatment,” he added.

Dr Shankar also said that the Fever Hospital had begun testing for coronavirus, which was underway in full swing at the premises itself.

After the patient tweeted the video, she said that a doctor visited her on Wednesday afternoon and gave her a prescription.

“Even though we were in isolation, a friend could drive down to visit us and get us some supplies. What about those who are not so privileged? The hospital should still make sure that a certain standard is maintained and facilities are provided,” she said. #KhabarLive