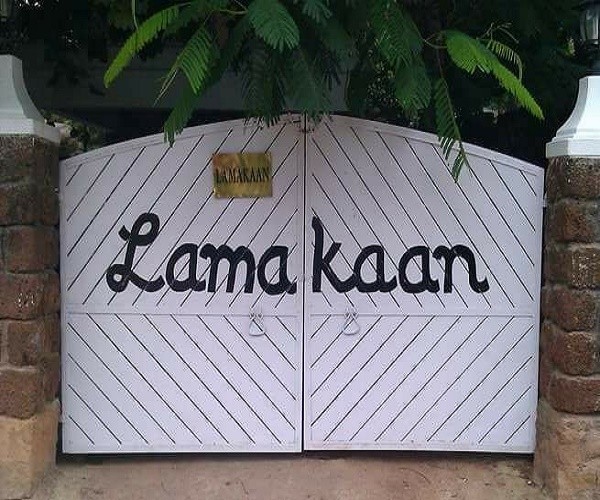 ‘Ek dasht-e-lamakan phailaāhai mere har taraf dasht se niklun to ja kar kin thikanon meiñ rahun‘ – The couplet by poet Munir Niazi is deep enough for one to sit back and reflect about having no place; the word ‘lamakaan’ in the short verse also refers to being omnipresent. Can the curly, cursive nastaliq word ‘lamakaan’ etched on the wall stone of a white house be more precise? We are talking about the open cultural space situated in a lane of Banjara Hills.

We are talking about Lamakaan: a name symbolic of free speech, solidarity for the subaltern, an open space with natural rocks as props for several performances be it poetry reading, theatre adaptations, discussions, book launches, meets and more. The place remains busy, and these days is much abuzz with a lot more activities given its eight anniversary celebrations are going on in full swing.

The 500 square yards area has seen several of such events as it all began on an evening of March 13, 2010 with the performance of Warsi brothers on the stage in the courtyard. Many who come to Lamakaan regret not having been part of that day. Interestingly, as the place turns eight it is ready with digital archives which will soon be available and accessible to all on its domain.

The portal has a calm white interface much like the building itself with the first video being the inaugurating qawwali. And it’s not just that, as a Lamakaan aficionado one can have access to all the events held here complete with video recordings and relevant content. Shares Ashhar Farhan one of the founders to whose family the property belongs, “The new portal with the archives will be live soon. It’s for those who can’t be physically present for the events.”

So how did Lamakaan come into being? The property belonged to Farhan’s uncle Moyed Hasan a filmmaker and a still-photographer. He used to live over there all by himself. That’s why there was and still is a lot of open space in the once-a-two-bedroom house. The kitchen that we see now was built in the hall area adjacent to which is a middle-sized room that houses Moyed’s black and white photographs which are not moved even when an art or photography exhibition is held.

So, will there be a screening of his documentaries at Lamakaan? Ashhar shakes his head in denial saying, “He used to make the documentaries for Doordarshan; we are trying to retrieve the same from the channel but couldn’t till now especially the one where he features a Dalit boy falsely convicted for setting afire a house.”

And what about the name ‘Lamakaan’? “Well, it also came from him, my uncle,” shares Ashhar. Does one have to pay for getting the place booked? “We expect people to pay the amount which is equal to five entry tickets. But we don’t insist anyone on paying. It depends on them,” he elaborates further.

In the same hall a remarkable photography and art exhibition ‘Gaza 51: a Place Called Home’ way back in 2016 showcased the artworks by young Palestinian artists organised by Mahnoor Yar Khan. One of the artists 23-year-old Mahmoud J Alkurd from Gaza had used his eight-year-old sister as the model for his works. An opus titled ‘Was Burned Alive, While the World is Still Blind’ featured true story of a Palestinian family of Ahmed Dwansha that set ablze by Zionist settlers.

It’s not just the art exhibitions, there have been book launches, talks on support of LGBTQ, discussions by firebrand writers and stage performances. Way back in 2016 after Rohith Vemula’s suicide, a talk and solidarity meet was organised by Hyderabad Urban Lab which saw participation by people from different walks of life. “We always provide support to tribal groups, book launches, LGBTQ festivals and more because we don’t just offer a free space we also support the freedom of expression of thoughts as well,” Farhan adds further.

That’s how Rana Ayyub’s book ‘Gujarat Files’, that had sparked much heat across the nation and ire from political parties, was greeted with applause when she came to launch the same. And not only this, it was also a host space for the launch of gay poet-scholar Hoshang Merchant’s book ‘My Sunset Marriage’.

Lamakaan had its own troubles in 2016 when some neighbours wanted the place to be closed down, but thanks to the huge public support it survived the difficult times bouncing back with more life, more cultural events. During the staging of the plays or musicals like the recent tribute to poet Shaz Tamkanat the attendees make sure that they come back with plates of crispy, lightly-spiced samosas with milk tea from the canteen inside, which of late has become the heart of Lamakaan.

You can see students using the free WiFi, working on their laptops with plates of qeema pulao or parathas with egg curry or young professionals ditching restaurants nearby and rushing there for khattey chawal or platefuls of sprouts. Interestingly, they do not sell any packaged food, soft drinks or packets of chips. That’s how you get cold lassi or glasses of chilled nimbu pani.

As part of the 8th anniversary celebrations the other day only they had Chekka Bommalata of Burugupeta village – a colourful show of puppetry which got huge applause from the audience. Today noted actor Ratna Pathak will perform Ismat Chughtai’s ‘Mughal Bachcha’ followed by a discussion on the challenges of small theatre today. This will be followed by a traditional Hindustani musical evening by prof Subendu Ghosh on March 20 and a Hindi play ‘Ek Gumnaam’ on March 21.

And this is not the end they plan to make it big on the tenth anniversary two years later, but for now Lamakaan remains the heartbeat of the city. #KhabarLive