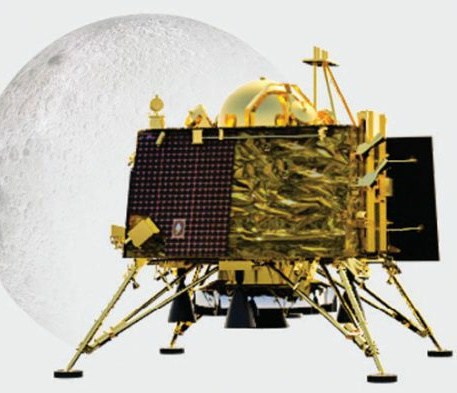 Another feather added in Hyderabad’s cap when India’s Chandrayaan-2’s lander touches down on the moon on Saturday, a part of Hyderabad’s can-do-spirit in the form of specialised materials manufactured by Midhani, the city-based Defence Ministry unit, are set to become part of the country’s exploration of the moon.

India’s moon lander Vikram carries with it three payloads, two of which – Rambha and ChaSTE – are made with titanium rings, bars and blocks manufactured by Mishra Dhatu Nigam Limited.

Some of Vikram’s structural components as well as that of ISRO’s Chandrayaan-2’s moon rover Pragyan, are also made with the tough titanium alloys Midhani produced. Incidentally, when Vikram lands on the moon, it will be the second time that Midhani will leave its mark on earth’s natural satellite.

The first time was during the Chandrayaan-1 mission when the spacecraft released its Moon Impact Probe (MIP) on November 14, 2008, for an intentional crash landing on the moon’s surface. The MIP also carried structural elements made from materials manufactured by Midhani.

Midhani’s Group General Manager D Gopi Krishna told #KhabarLive that the technologies used in manufacturing titanium alloys were developed by Midhani and Defence Metallurgical Research Laboratory. ‘Midhani is the only facility in the country that has state-of-the-art facilities including vaccum smelters and water cooled copper crucibles for manufacturing titanium alloys that meet the stringent standards to meet requirements of space exploration,” he said.

And among millions of Indians waiting with bated breath for the successful landing of Vikram and the subsequent rollout of its Pragyan rover, will be officials and staff from Midhani, which supplied specialized critical components for India’s second moon mission.

The Rambha (Radio Anatomy of Moon Bound Hypersensitive ionosphere and Atmosphere) is a Langmuir probe that provides information of the lunar ionosphere, a highly dynamic plasma environment. Rambha’s primary duties are to measure ambient electron density/temperature near the lunar surface, and time related evolution of lunar plasma density. This will be a first of its kind measurement near the lunar surface under varying solar conditions.

The other payload on the Vikram lander, ChaSTE (Chandra’s Surface Thermo-physical Experiment) measures the vertical temperature gradient and thermal conductivity of the lunar surface. This consists of a thermal probe (sensors and a heater) that is inserted into the lunar regolith (the layer of unconsolidated solid material covering the bedrock) down to a depth of 10 centimeters. #KhabarLive