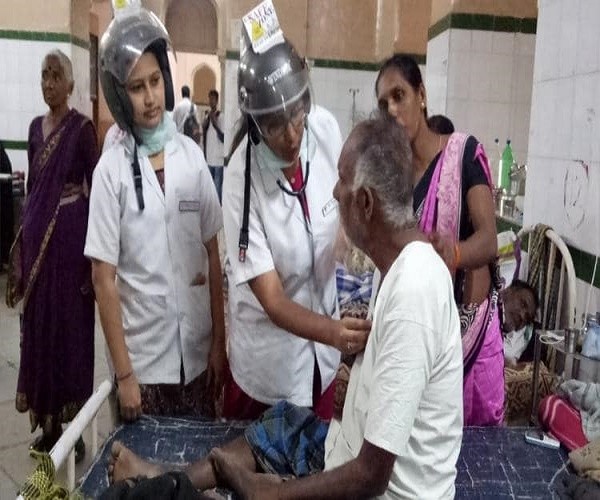 Doctors at Osmania General Hospital, in Hyderabad, have resumed their agitation demanding a new premises be constructed. On Friday, doctors, wearing helmets, to show how unsafe they felt inside the dilapidated old hospital, treated patients outside. Parts from the ceiling of Osmania General Hospital have collapsed in the past, injuring patients.

The building has fallen into disrepair, quite literally, as blocks of ceiling from the in-patient ward has fallen down in the last few months, injuring patients. Doctors say they fear working inside the hospital, given that the roof could, once again literally, fall on their heads.

Accusing the government of neglecting their concerns, the Osmania Government Hospital Joint Action Committee (OGHJAC) has once again resumed their strike. The four-month strike was withdrawn after the Health Minister Dr Laxma Reddy had assured of constructing a new structure soon.

Speaking to #KhabarLive, OGHJAC chairman, Pandu Naik said, “The Health Minister Dr Laxma Reddy in April promised to lay the foundation stone for the new structure and to take up the construction works soon. However, after three months, they haven’t done anything and now they have dissolved the government. These structures don’t know if the government has been dissolved or not, it could collapse at any moment. We are constantly worried. Should we work taking such extreme risks?”

According to Naik’s strategy, the doctors and staff will abstain from work for more than an hour and stage protests.

“Every day we are protesting from 9 am to 11.30 am. We have been fighting for everyone, yet our demands continue to be neglected. So far, at least five persons have been injured. We will continue to protest until one of the authorities respond,” he said.

Expressing concern about the dilapidated structure, he added, “Both the Greater Hyderabad Municipal Corporation (GHMC) and Telangana State Medical Services and Infrastructure Development Corporation (TSMSIDC), after examination, have declared the structure unsafe. So whom do we complain to now?”

The TSMSIDC, a body which reviews the infrastructure of government hospitals, last year declared two floors to be unsafe, while the GHMC recently said that the entire structure is on the verge of collapse and issued a notification declaring that the ancient Osmania General Hospital (OGH) was ‘unsafe’ after a huge chunk of roof collapsed.

In 2015, the Chief Minister, K Chandrasekhar Rao had proposed demolishing the heritage building by decategorizing it as a heritage structure, and constructing a new hospital in the same premises.

However, heritage enthusiasts argued that the hospital, constructed during the Nizam era, shouldn’t be demolished. After facing stiff opposition, the government withdrew its proposal. #KhabarLive