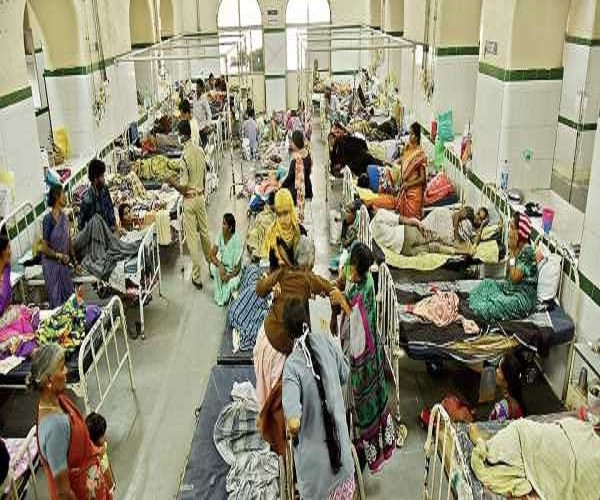 The over one century-old heritage building of Osmania General Hospital (OGH) continues to pose fresh challenges to health authorities. Following several incidents of roof-plaster falling and injuring a few persons in the process, recently the town planning wing of Greater Hyderabad Municipal Corporation (GHMC) too had deemed the heritage structure ‘unsafe’. Risk of life in hospital building, says civic body notice, putting authorities in a fix.

A notice by Assistant City Planner (ACP), GHMC to the hospital authorities said the heritage structure was unsafe for occupation. There is a risk of life during the rainy season and it is the responsibility of the authorities if any untoward incident occurs, the notice apparently said. A similar notice was also forwarded to engineering wing of the GHMC.

The development has put authorities in a tough spot, as they struggle to come up with a response to an issue that has festered for years. A few years ago, the structural engineers of JNTU too had said that the heritage structure was unfit for occupation.

While the State government has already agreed in-principle to construct a new OGH building, authorities are caught in a dilemma on where to shift the hospital on a temporary basis.

“It will take at least two years to construct the new building. Till then, working out of this old heritage building is not sustainable and is unsafe for all. The hospital in its entirety has to be shifted on a temporary basis to a nearby government building,” says Chairman, OGH, Joint Action Committee (JAC), Dr. R. Pandu Naik.

A few years ago, the authorities had proposed shifting the medical wings to the Government Maternity Hospitals in Petlaburj and Sultan Bazaar. The proposal caused a lot of logistical nightmares for patients and healthcare providers, which prompted officials to put the project on hold.

“You can’t separate medical departments in a teaching hospital because everything is interlinked. It is impossible to operate outpatient, inpatient and diagnostic facilities from three different places. This will create a lot of problems for patients and doctors,” Dr. Naik points out.

Acknowledging the issue, the hospital authorities have decided to approach higher-ups. “So far, we have been able to manage the hospital without any major untoward incident. We will approach the higher-ups seeking a quick resolution to the issue,” maintained Dr. Nagender. #KhabarLive