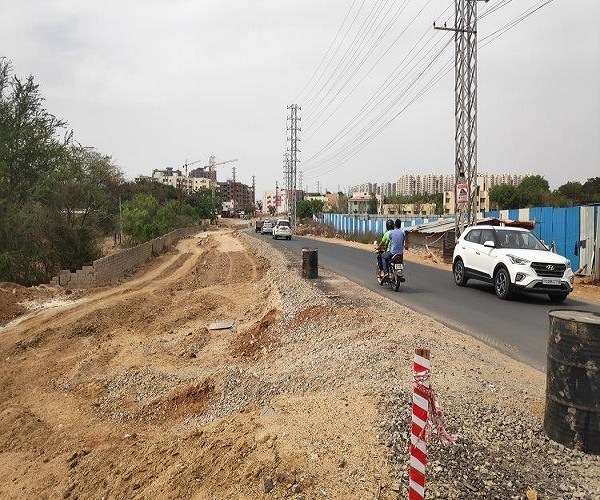 A road expansion project in Nallagandla, a posh suburb of Hyderabad largely inhabited by techies, has made travelling on the stretch a nightmare. In the morning and evening, when several hundred residents go to work, traffic is brought to a virtual standstill.

According to residents, the key stretch near the Lingampally flyover, Gopanpally, and Gowlidoddi, because of the work going on. This road is used widely by people in the area going to the BHEL side or towards Financial District and Gachibowli.

Local residents say that this has been the situation for many months and rue that there is no respite. The expansion of the Nallagandla road was allocated in November 2016 and has progressed slowly. The expansion project was intended to expand the 5 km Nallagandla road into a 100 feet road to accommodate the huge traffic, and work started on January 2018. Since then however, work has fluctuated with bouts of rapid progress and periods where there were no workers in sight for days or weeks on end.

As of now, only a small stretch, from Aparna Sarovar to the nearby Ratnadeep supermarket has been completed, while for around 4 km, hundreds of vehicles are forced to use a single lane as they commute to and from work.

“The roads are very narrow and congested because only one side of it can be driven on, especially between 9 and 10 am, and 6 and 8 pm, when the bulk of the traffic is there. I think this expansion has merely damaged the roads because it doesn’t seem like it’ll ever be finished,” said Roopa, a resident of Nallagandla.

Even the stretch that has been completed, has not been without its problems.

“In this stretch of the road is a temple which is heavily obstructing one side, and the traffic has to swerve around it into the other lane. It is very risky and accidents are bound to happen,” said Vivek, General Secretary of the Nallagandla Residents Association.

Stating that the road work was not properly planned, Vivek added, “The nearby road from Wipro circle was completed recently but work on this road is going at a very slow pace and has caused immense traffic problems.”

ALSO READ:  Techie Fired For Saying “Correct Me If I’m Wrong” More Than 25 Times During An 'Office Meeting' In Hyderabad

The Roads and Buildings (R&B) department have previously stated that land acquisition has been a huge problem with individual land owners not agreeing to their terms. The road expansion has also affected businesses situated near the road as the roadwork has completely cut off access to some shops and they have to simply wait for the work to be finished before they can resume their business. Lot of heavy vehicles also take this road on a daily basis, which kicks up dust, causing inconvenience to shopkeepers and pedestrians alike.

The nearby supermarket, Ratnadeep, which attracts a huge crowd everyday also faces problems because the road bottlenecks directly in front of it, which causes traffic congestion.

The roads get worse whenever it rains as parts of the road are unbuilt and get waterlogged, which further cause traffic issues and are risky to drive on.

D Hari Chandana, the GHMC zonal commissioner responsible for this area, acknowledged that progress has been slow and told #KhabarLive that she has been pursuing the project with the R&B Department.

Speaking to #KhabarLive, Serilingampally GHMC corporator R Nagender Yadav said, “Land acquisition is the main obstacle to the progress. We have given compensation to those involved. As of now, work is going on.”

Meanwhile, workers at the spot claimed that the road will be finished completely in another two to three months. #KhabarLive