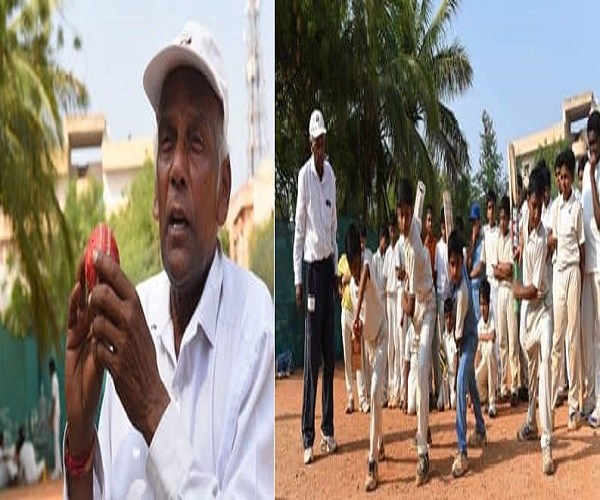 His expression said it all. Paruvu Harimohan, the former Hyderabad Ranji fast bowler, was dumbstruck when 72-year-old Devraj Devendraraj Govindraj, a member of the victorious Ajit Wadekar-led Indian team that conquered West Indies and England in 1971, showed a fast bowler’s action to young trainees at his academy in Kothapet.

“Look at his landing and finish, perfect for any fast bowler. At 72, this fast bowler has not lost his passion for the game,” was the reaction of Harimohan. There was a smile on Govindraj’s face at the end of the training session but then held his back a bit.

“I have this (sciatica pain). There is a risk of a spine injury if I go for a surgery. The doctors told me that I may even get paralysed. I got this troublesome knee after my seven-year stint as a driver in London. My legs were swollen and I was sitting idle. This was when I decided to come back to India to start a new career as a coach. This place (pointing to the ground) was literally a forest. We have converted it into a playground. There are 70 trainees round the year. I want to see one of them go on to play for Hyderabad and India. That is my dream which I could not fulfil during my playing days. Yes, I cherish the moments when I was regarded as the fastest bowler in the country or when I was part of the Indian team that made history with the first-ever series win in West Indies and England in 1971,” recalls Govindraj.

He says it is a big regret that he could not play a single Test though he had the best chance in the Manchester Test during the England tour. “The match was played on a green top. But, India had a concept of relying on spinners than fast bowlers,” he shares.

Abid Ali, the fellow Hyderabadi, was the lone fast bowler, and took four wickets before lunch. “I was helpless. The conditions were ideal for fast bowling. India bowled with Abid, Solkar and Gavaskar with the new ball.” Govindraj bowled fast in his heyday which began in 1964-65 and ended in the 74-75 season. But, he started his career as a batsman and who could bowl off spin.

“I played for Hyderabad Schools as a No 3 batsman and used to bowl off spinners. I used to take wickets for my school, Keshav Memorial. One day, Jaisimha saw me bowling a new ball at the school nets at Fateh Maidan. He said ‘you have got a good movement why don’t you become a fast bowler’. He gave me six new balls to six new batsmen. I used to bowl to Jaisimha, Pataudi and Abbas Ali Baig with the new ball. It used to swing a lot. Soon, I started going to Gymkhana and once I got 16 steps, I continued to bowl fast although there was no coaching as such,” he says.

He was 16 when he played for Hyderabad. In 1967, Govindraj missed the tour of Australia. It was big news in the Bombay newspapers. “I was disappointed but my father Devender Raj Naidu simply said ‘never lose hope’ since I was only 21 then,” shares the cricketer. But, he was picked for West Indies tour in 1971 following good performances in the Moin-ud Dowla and Ranji Trophies. Although he never got a chance to play a Test, he cherished the biggest moment of his career.

“I clean bowled the legendary Gary Sobers, who, I feel, was one of the greatest batsmen, in the match against Barbados in the second innings. But, there was an interesting tale to tell in the first innings. Jaisimha was standing in mid-off and he asked me to bowl a bouncer to Sobers. I did and the batsman was surprised as the ball flew past him. Jaisimha signalled me to bowl a second bouncer which Gary noticed. The next moment, the ball flew past me over long off for a six. That was Gary Sobers,” Govindraj says.

“When I came back for lunch time, the great Walcott and Weekes were impressed with my bowling. Walcot said: ‘Son you have got a beautiful action.’ In the second innings, I cleaned bowled Gary with an out-swinger. The West Indies skipper went for a drive and missed it. I always loved to bowl to left-handers. In fact, Gary suggested that I should go to England and that was the reason I was there on that tour or otherwise would have been probably dropped,” he adds.

How he could be a good fast bowler without a proper coach? “Six hours of intense practice. And Jaisimha was a guide and philosopher. He had the gift to spot a talent. He was my cricket idol and a lovely human being. He was a cult hero. Yes, Hyderabad did not win Ranji Trophy under his captaincy. But, there was so much to learn when he played,” he says.

After 1971, Govindraj lost his way before hanging up his boots in 1974. He won the Moin-ud Dowla for Hyderabad and State Bank of India. Once, he was dropped from the Hyderabad side after playing for Irani Trophy. The fast bowler had the opportunity to play in English county for Somerset but could not play.

“After the ’71 tour, I wanted to play county cricket. Somerset showed interest. In 1971, I got married to a Guyanese girl. I asked (for a) ticket for her too to England, they refused, and I did not go. It was probably one of the mistakes. Those days, there no physios and I began to have a shoulder problem,” says Govindraj, who was posted in England while working for the State Bank of India. After retirement, he went to drive buses in the streets of London.

“My second hobby was driving. I was never ashamed of that work. Rather, I enjoyed it. After retiring from SBI in 2002, my second wife Chandrika asked me why I can’t take driving as my profession. I went to a bus company and I passed. I enjoyed driving much more than my bank job. I got more money. But, the years of driving took a toll on my knee,” he shares.

Now with his family in London (wife, four daughters and son), Govindraj is on a mission (in Hyderabad). “Young players like Richie, Chiranjeevi, Kakateya are born to play cricket. Here, cricket is in bad shape. A cricketer has to pay Rs 60,000 to play three-day cricket or Rs 30,000 for two-day cricket. It is sad. It is time we clean up the game. I think the Hyderabad Cricket Association should give priority to former cricketers to be coaches of the clubs, not a footballer or tennis player. It is ruining cricket,” he laments.

Interestingly, Govindraj has yet to get the one-time payment of Rs 25 lakh from BCCI due to him after the twin tours of England and West Indies. “I have played over 79 first class matches, including Indian tour matches, Moin ud Dowla, Ranji Trophy and other matches. I don’t know why BCCI is holding up my money. I have written numerous letters and there is no reply from the board. It is sad. BCCI refuses to recognise my achievements,” he says.

As a fast bowler, he likes the rise of Indian pacers. “Look at Umesh Yadav, Jasprit Bumrah and Mohammad Shami. They bowl fast. I like Umesh, who has a good run up, as a good outswinger, pitches the bowl up and clean bowls a batsman,” he concludes. #KhabarLive