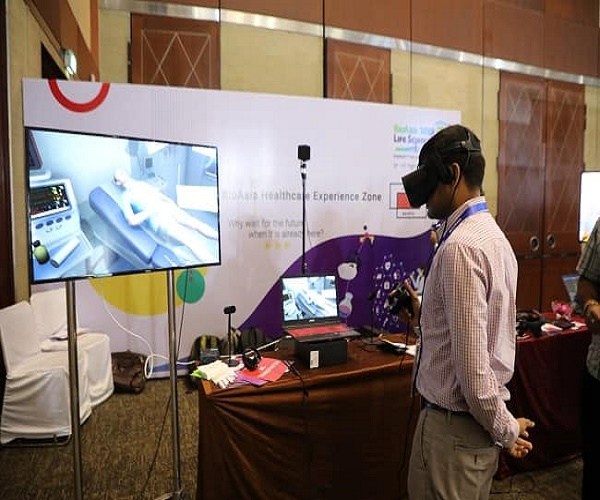 Nearly a year after its launch, Virtual Raasta, a Hyderabad-based VR production house showcased the future of life sciences and healthcare and the possibilities virtual reality and augmented reality present for these industries.

Using Bio Asia 2019 summit as a platform, Virtual Raasta showcased what it called ‘The future of healthcare’, where it aims to bring in a new dimension and perspective to the healthcare and lifesciences sector, in an interactive, immersive way.

“Our mission is to improve and harness new technologies such as AR and VR and redefine healthcare. Using VR, students can be trained on how surgeries take place, what happens post-surgery, what the future of patient care will be and more,” says Prem Kumar Vislawath, co-founder of Virtual Raasta .

Virtual Raasta was launched in July 2018. It was carved out of Raasta Studios, founded by Sai Kumar and Prem in 2013, which caters to the B2B segment, offering film production services to corporates, institutions, agencies, NGOs and government bodies. This startup, which is also part of Hyderabad-based startup engine T-Hub, now runs three brands – Raasta Studios, Amplify and Virtual Raasta under the parent company Raasta Studios Private Limited.

ALSO READ:  How To Mint Money From An App?

Virtual Raasta used a combination of AR, VR and 360-degree videos to showcase these possibilities, which it will soon deploy to various life sciences and healthcare companies.

Using VR, Virtual Raasta hopes to simplify patient care, where doctors can understand the patient better and make the doctor-patient relationship more interactive through VR. Its solution can also help in primary patient care and nursing.

It has also developed tools for educational purposes for the industry. For example, its assessment tool gives an individual a gamified experience in VR, while capturing data of the interaction and creating a summary of assessment of specific traits of the player.

This, Prem says, will be very useful for hiring, internal promotion, lateral movement of employees. It also showcased a cell counter in VR. This is where through VR, lab-based process training can be done giving instructions at each stage visually, making the learning experience more immersive.

It has created a virtual view of the complete human anatomy, which can be used for education purposes where students can move and view individual parts/layers and organs. This solution is also deployable on the iPad for mass consumption and usage. This, Prem says, is highly effective for patient education, hospitals, medical colleges, pharmaceuticals.

It also showcased VR experiences for patient education, where for example, a patient can be told about the impact of a specific drug for a life-threatening disease or lifestyle disease through VR. Another use case could be giving the patient an immersive experience to understand the internal changes in the body during treatment. This solution can also be used by pharmaceutical companies to train the medical representatives for new drug releases.

“Sangita Reddy was very excited to see our solutions and told us she would want to deploy it for emergency care. Zydus too, showed interest in using VR to help patients understand what happens during a surgery. We also saw a lot of interest from pharma companies who wanted to use our solutions for training modules and educational purposes,” Prem says.

Thanks to the immense interest the company saw, Virtual Raasta hopes to on board at least 30-40 new clients from the life sciences and healthcare space in the next 6 months.

For the VR-based training modules, virtual content and its 360-degree videos it has created so far, it already counts some names such as Hindustan Unilever, Ikea, Tech Mahindra, Laurus Labs, Govt of Telangana, T-Hub as its clients. In fact, Virtual Raasta also showcased its solution at the recently concluded World Economic Forum in Davos where visitors could use VR to experience what Telangana has to offer. #KhabarLive