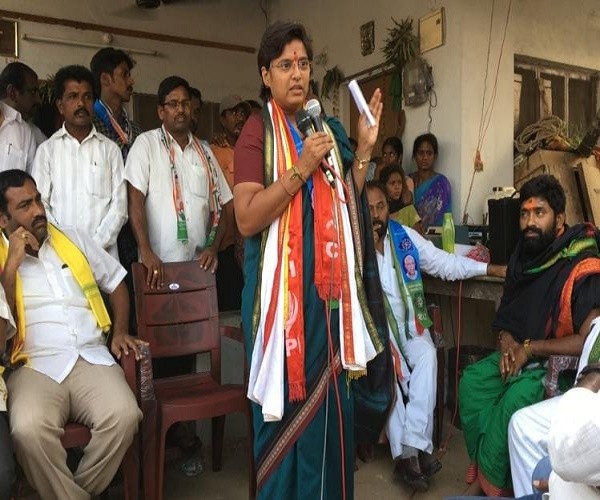 On a hot and dusty day in November, the sleepy town of Kodad is stirring awake, only to be rankled by loud, colourful campaign vehicles that extol the virtues of political leaders, past and present. Even as India’s youngest state, Telangana, is gearing up for elections on December 7, incumbent Congress MLA Padmavathi Reddy is campaign-hopping from the urban to the rural parts of her constituency in Suryapet district.

Seeking out people from different walks of life– from sugar mill owners to cattle farmers– Padmavathi has a gruelling schedule ahead of her. Even as she enters the home of a local leader in Thogarrai village, chants of ‘Jai Congress’ rent the air. With three colourful party flags draped around her neck, Padmavathi Reddy carries one message: the Prajakutami or People’s Front, the umbrella alliance of the Indian National Congress, the Telugu Desam Party and the Telangana Jana Samithi (TJS), along with the CPI, must win.

“Fours years of being an MLA under this particular government was a big disappointment. It was also very dissatisfying,” she tells #KhabarLive, surrounded by party men eager to record her speech.

“I had faith in the Indian system and that even as an opposition MLA, we could get certain things done if we put enough interest in it. But under this government, I was quite disappointed with the results,” she says.

Holding on to Kodad
As a first-time candidate, Padmavathi Reddy was one of just 21 Congress MLAs who won the Assembly Elections in 2014. Kodad has long been a Congress strong-hold with Padmavathi’s husband and Telangana Congress President Uttam Kumar Reddy having been elected from here twice in the past.

So what has she changed in the constituency over the last four years and what is the road ahead?

“Kodad is quite an affluent constituency. Earlier, Uttam Kumar Reddy was the MLA. During that time itself, basic infrastructure like lift canals, roads, electricity, drinking water facilities and all was put into place. Now the problems were about repairing a lot of those lift canals since the city has grown. More new roads need to be laid. There is a major drinking water problem because the town has grown.” she explains, adding that the need for irrigation and drinking water systems at Mothey mandal in the district is also a challenge.

Padmavathi laments that the state, wealthy during the time of bifurcation, has been “bungled up into a financial mess” by the ruling Telangana Rashtra Samithi (TRS).

“We are hoping to change (things) because we are hoping our government will come to power soon now in these coming elections. Congress party knows how to administer and give good governance,” she claims.

Candidacy
On the political front, Padmavathi finds herself between old timers in the party who have been increasingly vocal against nepotism in the ranks and her husband, the party chief in the state. In fact, her ticket was among the last to be announced by the party.

Defending this, she says that the ‘one ticket per family’ rule did not apply to incumbent MLAs to begin with.

“Internally, the party had decided. We were only 21 sitting MLAs out of 119. We were already cleared in the first list to be re-nominated. In my particular case, the party had to again decide, thinking about one ticket per family. It was decided internally that this rule would not apply to sitting MLAs.”

The delayed announcement, she says, was to calm things down.

Dispelling rumours of dissent within the party, Padmavathi says that she is a woman in her own right and has been recognised by the Congress as such.

She says, “I am proud of Congress party for recognizing women not just as a wife, but in their own capacity. Though of course I am a wife and that comes out as the first point, the winnability was the factor last time around too. I also served in the unofficial capacity for 20 years. Survey reports also showed winnability. Congress party wanted to empower women candidates. So all these factors put together, I was given a ticket.”

The MLA acknowledges women voters in the constituency, who outnumber the men, give her a much-needed shot in the arm.

Husband as Chief Minister? Why not?

One of the most-watched aspects of this election has also been the race for the top job within the People’s Front alliance, in the event that they prove to be successful on December 7. With several strong Congress veterans in the state like DK Aruna, Shashidhar Reddy, Ponnala Lakshmaiah and Revanth Reddy, Uttam Kumar too is in the race.

“Why not?” she shoots back in response to her husband’s Chief Ministerial ambitions.

Stating that he deserves to be rewarded for his contributions to the party, she says, “Apart from being a wife, even if I analyse him politically, I think he’s a good person. He has done a lot. In his own track record, he has done a lot of development in his constituencies for the last 20 years that he has been an MLA. I think he deserves every bit of it and I would vote for him. Not as a wife, but as an MLA also.” #KhabarLive