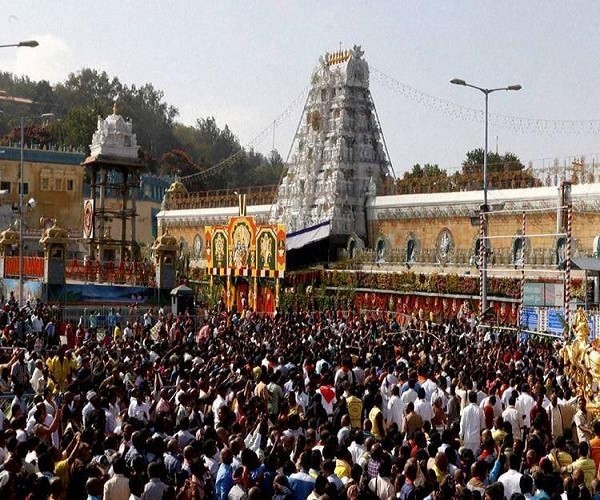 A legal battle is brewing in the Hyderabad High Court as the Tirumala Tirupati Devasthanams (TTD), the governing body of the Lord Venkateswara temple atop Tirumala, has argued that it did not come under the purview of the Right to Information (RTI) Act as it is not a ‘public authority’. The TTD spelt out its stand earlier this week in a petition, after it moved the court over orders by the Central Information Commission (CIC), to divulge certain information to an RTI applicant.

The petitioner, BKSR Ayyangar, had filed an RTI application with the Prime Minister’s office in 2017 asking for information on ornaments donated to the temple by 16th-century ruler Sri Krishnadevaraya, which were allegedly ‘missing’. Unsatisfied with the response he received, the petitioner approached the Commission in April this year.

The petitioner also pointed out to an instance where the TTD allegedly demolished a thousand-pillared ‘mandapam’ in front of the main entrance of the temple, in breach of Archeological norms and said that several spiritual leaders had vehemently opposed the move.

Speaking to #KhabarLive, Central Information Commissioner Sridhar Acharyulu explained, “There was a second appeal before CIC about certain archaeological related matters and the information was available with the TTD and not with the Central Archaeology Department. Therefore, I extended my orders asking TTD to provide the information but the religious institution said that it’s not a public authority. In that context, I studied whether that argument stands and argued that TTD ‘can be’ a public authority and should come under the RTI Act.”

He added, “I asked the TTD authorities why they don’t consider themselves as a public authority. That was what my order stated. Then they moved the Hyderabad HC saying that the CIC does not have jurisdiction over a state-body like the TTD. They took up a technical ground. I agree with them about the jurisdiction but my argument stands that the TTD has a moral and legal responsibility to reveal the information,” he added.

Background
The issue of demanding transparency is far from new. In a press meet held in 2016 by People Against Corruption (PAC), then State Information Commissioner and advocate P Vijayababu had said, “Not just the TTD, but all religious bodies in the state make the same claim and say that they do not come under the RTI act and often refuse to divulge information. It is a contempt of court that the TTD takes that stand.”

However, this was not always the case with the TTD, as it had shared information in the past under the RTI Act, until 2012.

Speaking to #KhabarLive, former Executive Officer of the TTD, IYR Krishna Rao said, “The TTD should absolutely come under the RTI Act. In fact, it was under the act even when I was the EO and we were giving the information. Subsequently, someone who came as the EO felt that it would unnecessarily embarrass them; so an order was issued, which no one has seriously challenged in the court of law so far, and thus it continues to be so like this.”

Krishna Rao, who was also the former Chief Secretary of united Andhra Pradesh, said, “It is a statutory body. There is an Endowments Act that says that any statutory body comes under the purview of the RTI Act. There is no way they can say that they are not a public authority.”

He also agreed that the TTD had a moral and legal right to share information with the public.

The TTD’s stand
The petitioner, in his appeal to the CIC, said that the “TTD stonewalled information requests, refusing to come under the RTI Act,” though it was part of the Endowments Department of Andhra Pradesh, which meant that it was a public authority.

The CIC also noted that the TTD was ‘neither transparent nor accountable.’

The CIC pointed out in a letter on September 2012 that the TTD had responded to an RTI request and furnished information about the thousand-pillar mandapam, but changed its stance within two months, stating that it was doing so under the instructions of the Executive Officer of their religious body.

“The Tirumala Tirupati Devasthanam is a single religious institution, which is governed by the Andhra Pradesh Charitable and Hindu Religious Institutions and Endowments Act, 1987. Nowhere in the said Endowments Act, it is said that this Act is brought out to establish or constitute ingredients to fall into the definition of Public Authority under the RTI Act. On the contrary, it is very specifically said in the Preamble of the said Act that it is only for the administration and governance of Charitable and Hindu Religious Institutions and Endowments in the State of Andhra Pradesh,” the TTD said in a letter dated November 17, 2012, to the petitioner.

Further, the TTD argued that “constitutional protection was available to religious institutions, which were independent, autonomous bodies, not established or constituted by the government.”

The TTD also stated that it was administered and governed only indirectly by the state government, which appointed Trust Board members, who functioned as an autonomous body.

The TTD also cited a Kerala High Court judgement from 2011, which said that temples and their offices were not established or constituted by or under the Constitution of India or by notification or order issued by any government, which meant that they were not owned by the government.

“Every religious institution has the right to manage its religious affairs, including its religious activities, income and expenditure, assets and liabilities, and to keep them secure as it relates to their specific religious institution only. It may be appreciated that any religious body – Hindu, Muslim or Christian – may not be willing to share its information with the public other than what is warranted and requires to be shared with them. In other words, these religious institutions are complying with all Statutory Laws all the time and also the freedom given under Article 26 of the Indian Constitution,” the TTD said in its letter.

The bone of contention
In 2011, a committee was constituted by TTD headed by former Supreme Court Judge Justice Wadhwa, which submitted a 137-page report.

In the report, Justice Wadhwa had noted, “We have suggested to the TTD to make use of modern technology to have a more transparent and foolproof system for the protection of jewels”.

Citing the report along with several other similar committee reports, the CIC, in its recent order, noted that the “TTD has done nothing to be transparent about it, but illegally attempted to escape from the scrutiny of citizens under RTI Act. It is clear that TTD did not honour the recommendations of two former Judges of Supreme Court in the committees appointed by the State Government.”

Stating that the TTD could not ‘escape accountability under the RTI Act’, the CIC observed, “The TTD is basically a trust and administrative body with the duty to provide good governance of the temple affairs, as per law. Whether under RTI or not, they are answerable to people/devotees for every rupee they spend, because that money belonged to the people in general and they are wielding a high power to spend hundreds of crores of rupees every day. They have a duty to answer every letter, criticism, question and petition.”

The CIC also noted that the management, administration and organisation of TTD were subject to the guidelines issued by the Government of Andhra Pradesh through the Ministry of Endowments, which meant that the Government controlled the TTD through the constitution of the Board of Trustees and appointment of the Executive Officer. This, in turn, the CIC argued, was enough to bring the TTD under the RTI Act.

“It’s absurd, immoral and illegal to plead that TTD is not accountable to people under the RTI Act. Such an unreasonable plea raises suspicion that something is rotten in it, and it wants to hide. Being one of the most efficiently administered organisation, the TTD has no reason to fear the RTI Act and escape the accountability or answerability… people have every right to demand every bit of information about the way they are spending the money they have donated to Lord Venkateswara,” the CIC said in its concluding remarks.

It also directed the PMO to inform what action the Government of India was contemplating to recognise the Tirumala temple as a ‘national monument’ and to enforce an international obligation to protect the world heritage structures and ornaments that come under the TTD. #KhabarLive