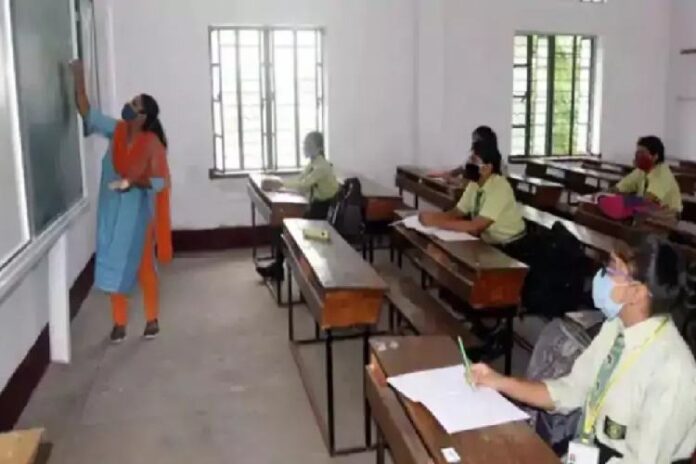 The government of Telangana granted permission to reopen schools for classes 9 and 10 from February 01 onwards and the reopening affected with some impractical SOPs and restrictions in schools and students to run the show smoothly. 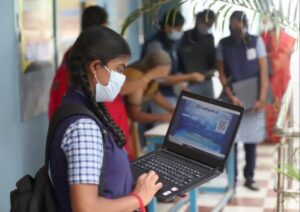 It was surreal for 16-year-old Sujatha when she stood in front of her school. It was the first time in eleven months she was attending school, interacting with her teachers and classmates in a formal setting. This after the government of Telangana granted permission to reopen schools for classes 9 and 10 from February 01.

Before taking a call on reopening schools, the state government had ordered schools to conduct a consultation with parents to know their thoughts on reopening schools after a long break. It was then reported that a major chunk of the parents wanted schools to be reopened at least for students who will face board exams in a few months, since they have been attending classes only through online mode since the beginning of the current academic year.

Sujatha, a class 10 student in a private school in Hyderabad, feels the stark difference between March 2020 and February 2021. “Now we have classes in batches and we have around 20 students in a class,” she says. Sujatha’s school has also scheduled classes only on alternate days for classes 9 and 10 and has also continued offering online classes for those who don’t want to attend classes in person. “Students who didn’t get parent’s consent form were sent back home from the gate,” Sujatha adds. 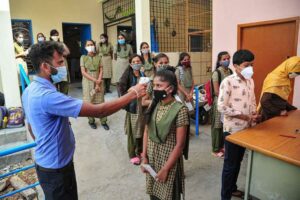 Though schools have reopened, several students expressed anxiety to get back to the grind and prepare for their offline board exams.

“The schools started late for us and they’ve said that portions are reduced. However, we do not see much of a difference and we are forced to study most of the topics,” said a student of a private school at Saidabad in Hyderabad, who did not wish to be named.

The schools were taking online classes but most of the portions are still pending so all of us are nervous about completing the syllabus and scoring well in the boards, she said. “The schools may also tell us to finish record books and other works. However, we are running out of time. Next month, we may even have pre-exams so we feel under pressure,” she added.

Though the government of Telangana already announced the dates for the upcoming board exams, given that the state will go to polls in a few months, parents and students are still grappling with the drastic shift between online and offline mode of studies.

While students and parents are worried over exam preparation, the teachers and school managements have reported a tough time in ensuring physical distance between students and making them follow COVID-19 protocol inside the premises. 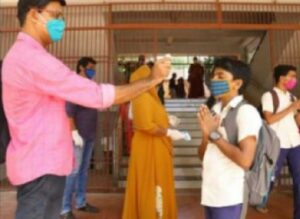 The state government’s COVID-19 SOPs included restricting the number of students per classroom to 25 and prohibiting students from sharing food and items like books and stationery.

“In my school, I am finding it difficult to control the students during lunch hours. The boys’ section try to share food and water among themselves whenever we are away from the class. So we have appointed teachers to monitor the students during lunch hours,” said a teacher working at a government school in Shackleton in Tolichowki. Adding that though the school has ensured that only 24-25 students are accommodated in each classroom, she said, “We have seated them only by following physical distancing but when students leave the school they tend to not follow them.”

Mandatory masks inside the school premises have also posed practical difficulties for the teachers since they find it a hindrance while taking classes. “So teachers end up removing the masks to make themselves audible to the students sitting in the last bench,” she pointed out.

“There will be initial obstructions and tiny inconveniences. It happens every academic year and this year it is just a little tightened because of COVID-19. Students will have to learn to adapt because moving forward, this is how things are going to be,” said Sirajuddin, parent to a class 10 student in Malakpet area.

Krishna Raj from Telangana Private School Parents Association, said that it is fair to conduct offline classes since students cannot be asked to study online for a good share of the year and be asked to write exams offline. “Only if they study in these two months they can clear board exams and as well attend competitive exams,” he added. Echoing the confidence expressed by teachers and parents, Krishna Raj added that it will take some time for the students to adapt to the new set up.

Highlighting the efforts several private schools have put in to stick with the SOPs, Krishna Raj said, “We are using single-seater as much as possible to ensure physical distance between students. In some schools with higher strength we are educating students in batches. It increases the burden among the teachers but still they are motivated to prepare their students for the exam and give a good result.” 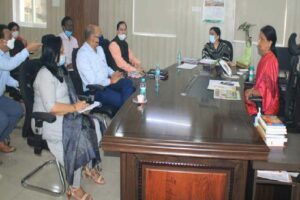 Reiterating that there were no rules making physical attendance mandatory for children, the Minister said students, however, would be allowed in school only with the parent’s consent. Students can choose between online classes and physical classwork as per the parents’ consent.

All students will be thermal-screened before entering classrooms, which will be regularly sanitised, she said. As 70 per cent of the syllabus has already been completed, the Minister asked officials to focus on doubts of the students apart from completing the remaining syllabus.

As lakhs of students were expected to attend physical classes, it is important to strictly implement Covid-19 safety measures to instil confidence among parents so that they send their children to schools without hesitating, she said.

The functioning of educational institutions in the districts is with the District Level Education Monitoring Committees, which have to oversee the formulation and implementation of an action plan for the same, the Minister said.

Reddy later instructed officials to procure rice freshly and other provisions for mid-day meals following all safety precautions. She also asked officials to ensure that all private educational institutions adhere to safety guidelines. Local bodies had already been asked to carry out sanitation work in schools, she said, directing officials to initiate steps to boost the self-confidence and morale of students for the forthcoming SSC examinations.

The schedule of the Intermediate Public Examinations will be announced within a week.