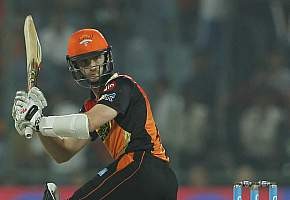 Kane Williamson made a statement on the eve of Sunrisers Hyderabad’s opening game of the Indian Premier League. The skipper of the Hyderabad-based franchise was the only batsman in the nets an hour prior to the arrival of the rest of the team for their final practice session ahead of the season opener against the Rajasthan Royals.

Being given throw-downs by assistant coach Simon Helmot for over an hour, the skipper continued to bat through until his team arrived and well beyond, working on his drives and follow-through from time to time. Knowing Williamson, it wasn’t a conscious ploy to make a statement, but an effort to prepare and get himself match-ready for Sunrisers’ big day on Monday (April 9).

Hyderabad had been hit by a hailstorm and heavy showers that had brought the city to a standstill for two hours on Saturday – two days prior to their first Indian Premier League match of the 2018 edition. With showers forecast, much in contrast to the typical heat in the month of April, the threat of wet weather looms large in the city causing concerns among some of the Hyderabad Cricket Association officials. It was, after all, only in October last year that rain and a wet outfield had washed out the Twenty20 International between India and Australia.

With weather being among the many uncontrollables, SRH have been meticulous about their preparation coming into the tournament. They were dealt with a mighty blow coming in with David Warner’s exclusion from this season owing to the ball-tampering scandal, but they have taken it in their stride, and well. With a couple of practice games at the venue, they have had impressive performances from their local youngsters, which has pleased mentor VVS Laxman. It has also given the squad a chance to acclimatise to the leadership of Williamson, who will take over as full-time captain.

Rajasthan, too, on their comeback from a two-year hiatus, were dealt a similar deal, with Steve Smith being banned from the tournament along with Warner. He was the only player that the franchise opted to retain from their previous squad, but his exit meant Ajinkya Rahane was named skipper, and South African Heinrich Klaasen, his replacement.

Royals, too, are coming in with some good preparation back in Jaipur, before a full training session at the Uppal stadium on Saturday (April 7), before the skies opened up. Their squad boasts of familiar faces from the Rising Pune Supergiant side and the previous RR squad, which would assist Rahane and make his job easier without the challenge of having to take over a fresh set of players two weeks prior to the start of the tournament, much like Williamson.

While familiarity is a luxury for both skippers in this case, the challenge of deliverance will be just the same. Royals have a lot to prove given their absence over the last couple of years, while Sunrisers will be keen to show that losing their leader in Warner will not hamper their ability as a side.

What: Sunrisers Hyderabad vs Rajasthan Royals

What to expect: A humid day in Hyderabad with temperature rising to 35 degrees is expected with showers forecast for the afternoon. The only challenge would be to get the outfield conditions in order for the teams to take the field, provided rain stays away leading into Monday.

Head-to-head: Royals lead the head-to-head count 4-3 against the Sunrisers. However, SRH’s record at home of 20 wins in 30 games will give them confidence, despite RR winningwon two of their four games played at the venue.

Team News: Sunrisers Hyderabad: Alex Hales joined the SRH squad four days prior to the first game and was first to bat at the nets on the eve of the game. He appears to be a sure- starter, in place of Warner at the top. Yusuf Pathan, too, had a long session in the nets, having even have headed to the nets before the rest of the squad, which could have him making the playing XI.

Rajasthan Royals: Klaasen was picked on the back of his impressive show against the Indian spinners in South Africa recently, which would hold him in good stead to be picked for their series opener against SRH, given the plethora of spin options that the hosts have in their armory. Jofra Archer’s availability will be subject to his fitness, as he had suffered a side-strain in the recently concluded PSL.

Did you know?
– Yusuf Pathan will be playing his 150th IPL game, if he makes the playing XI.

– In the last three years in IPL no target in excess of 150 has been chased down in Hyderabad. The highest target chased down in this period is 147 by DD against the home side in 2016.

– Rahane has got out to Bhuvneshwar six times. No other bowler has dismissed him more than thrice. Four of those six dismissals were before Rahane has opened his account and on five of the six times Bhuvneshwar got his man in his first over.

What they said:
“The ground seems to be drying very well. We’ve had a couple of situations leading in to today where we’ve had some very heavy rain but it hasn’t really affected our practice. The outfield’s been okay, it’s drying well. Over the last couple of days the ground staff has covered the whole ground so they’re very conscious of making sure that it’s in tip-top condition for our first game.” – SRH head coach Tom Moody.

“They are a very good side, very balanced and playing in Hyderabad against Sunrisers is always a challenge. We are not going to take them lightly and we respect them and that’s what cricket is all about: respecting your opponents and playing to your strength rather than thinking about the opponents. We just want to go out there, play our game, back our strategies and back our strengths. We respect Sunrisers and they are a quality team.” – Ajinkya Rahane, Rajasthan Royals captain. #KhabarLive