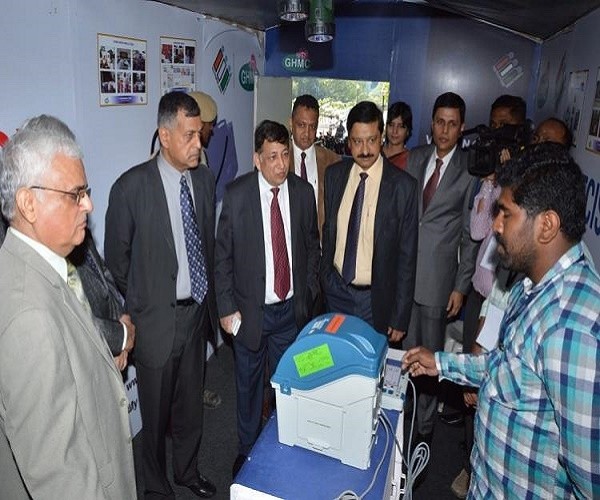 “If there is one thing we can be certain of, it is that Telangana is ready for the polls,” said Chief Election Commissioner OP Rawat, as cameras flashed away at the upscale Taj Krishna hotel in Hyderabad. Rawat was speaking to #KhabarLive after a three-day visit by an EC team from New Delhi to check poll preparedness in the state.

While the central EC team expressed its satisfaction and headed back to the nation’s capital, there continues to be a rising amount of activity at the H Block in Secretariat, where Telangana’s Chief Electoral Officer Rajat Kumar is taking stock of things for the elections, scheduled to be held on December 7.

A media point has been set up next to the Secretariat block and politicians and officials alike have been making a beeline almost so frequently that most local media outlets have permanently stationed a reporter and cameraperson at the spot.

Matters have been heated in the state since Telangana caretaker Chief Minister K Chandrasekhar Rao’s decision to dissolve the Legislative Assembly on September 6. Governor ESL Narasimhan ratified the cabinet’s decision on the same day.

While the TRS has already announced a list of 107 candidates for the 119-member Assembly, opposition parties in the state have been stitching together a ‘Mahakutami’ or grand alliance with the Telugu Desam Party (TDP), Congress, Telangana Jana Samithi (TJS) and Communist Party of India (CPI) joining hands.

Even as the election date draws closer, one of the most daunting tasks that the EC faces, is perhaps the use of money and liquor, something that the Telugu states of Telangana and Andhra are notorious for.

Help from all quarters
Speaking to #KhabarLive, CEO Rajat Kumar said, “There is a complaint that there is widespread use of money and liquor in the state. We are looking into it. We have seized cash worth Rs 31.41 crore as of October 27. Out of that, Rs 25.83 crore was seized by the police and Rs 5.58 crore was seized by the Income Tax Department.”

“Additionally, 65,364 litres of liquor has been seized, approximately worth Rs 1 crore. In earlier cases or generally in other states, the seizures are related to illicit distillation, locally known as ‘gudumba’. But the Telangana Excise Department has said that since gudumba distillation in the state has been wiped out, it is likely to be the regular type of liquor,” he added.

The CEO also said that they were coordinating with various agencies of other states like Chhattisgarh, Maharashtra, Karnataka and Andhra Pradesh to man the borders, adding that they asked for 307 companies from the Centre for poll deployment. Already, 22 companies have been deployed and three other companies were on their way, the top official said.

“We have deployed flying squads to seize unaccounted cash. It may not be related to political parties only, but basically, when the person carrying the money is unable to give us a proper explanation about the source or destination of the money, we seize it. If a link is established with a political party, then we act according to the Model Code of Conduct (MCC). Otherwise, the I-T department looks into it,” Rajat explained.

The CEO said that they had received 59 complaints so far, of which 11 had been resolved and 48 were awaiting decisions either from the relevant authority or in some cases, the political party.

“We have extremely sophisticated technology working at the back end. We have a cybercrime wing and social media experts; and we have been promised cooperation from social media platforms. As far as unaccounted money is concerned, right from Finance Ministry’s intelligence units to the investigative wing of the I-T department to banks, everyone is in the loop and filing reports as they are constitutionally mandated,” Rajat said.

Poll code violations
Several election observers say that conviction rates are dismal. For example, many candidates who contested in Telangana have a number of pending cases against them, as the elections were held shortly after the movement for a separate state.

“While it is better in southern states in terms of criminality and the number of serious cases, 2014 saw a lot of candidates having multiple cases against them as it was coming on the back of the Telangana movement. While a special court has been set up in the premises of the Hyderabad High Court, it remains to be seen how many cases it has disposed of,” says Rakesh Reddy Dubbudu from the Association for Democratic Reforms.

“Our demands have been simple,” he adds. “Parties should not give tickets to people with serious criminal cases. As of now, there is the only disqualification if a person has been convicted in the case. Our second demand is that there should be greater transparency. There will be more clarity once nominations are filed and we get to see their affidavits.”
The Forum for Good Governance has been working on the ground for close to a decade and conducted an extensive research, which showed that conviction rates on poll-related offences were extremely low. They also say that while seizures are announced, the release of the unaccounted cash, once verified, often did not make its way to the news.

In a letter addressed to the EC earlier this week, the forum wrote, “Money is playing havoc in the election process and the official machinery entrusted with the work is not able to control it. They are confined to seizing the money under transit and subsequent follow-up action to bring the cases to their logical conclusion is missing.”

Low conviction rates
The forum said that it collected information from all police stations in the state regarding the number of cases registered during the 2009 and 2014 general elections and compared it to the number of cases that were disposed of.

The data shows that in 2009, a total of 2,472 cases were booked, out of which 298 were convicted through court by imposing a small penalty, while 194 were compromised through Lok Adalat. A total of 1,980 cases continue to be pending, which included 544 cases that were booked for distributing money or liquor.

The forum also said that 4,974 cases were booked involving more than 2 lakh litres of liquor, which was seized during the 2014 elections. It said that in 543 incidents, Rs 34,38,50,997 was seized across the state. The highest number of poll code violations were reported in erstwhile Khammam district at 311, followed by Hyderabad at 272. Nizamabad came next with 169 followed by Karimnagar at 166. The highest amount of liquor at 502 litres was seized at Medak district, which witnessed 102 poll code violations.

Despite this, the forum states that there was no information available about the disposal of the seized liquor.

Speaking to #KhabarLive, forum Secretary Dr Padmanabha Reddy points out that generally, in such incidents, a case is registered under Section 171 of the Indian Penal Code (IPC).

“Most of the times, the cash seized is either from a bank or from merchants. The major parties don’t indulge in money and liquor distribution till much closer to the elections,” the retired IFS officer states.

“We have proof of that I-T is categorising the money into black and white. The black money, they are adjusting it towards tax, while the white money is being adjusted towards advance tax. Basically, the EC has become a back office for the I-T department,” he adds.

In its letter to the EC, the forum also recommended that officers should inform the press only after conducting an enquiry, adding that there should be a regular review of pending cases by CEO with the police department, especially pertaining to Section 171 of the IPC.

In fact, this has been a problem that the ECI has acknowledged. At the press meet in Hyderabad, Rawat himself said that the investigation and trial of poll-related offences had to be expedited and said that the conviction rate in 2014 in Telangana was just 25%.

“This time, while registering offences, they must see that all details are registered and conviction rates must be increased,” he said.

App to report malpractice
Determined to turn around the numbers, the EC has launched a mobile application in Telangana as a pilot project and dubbed it ‘C-Vigil’. Available on the Google Playstore, the EC said that the app will allow citizens to report any malpractices that they witnessed.

“Using this app, citizens can immediately report on incidents of misconducts by clicking pictures or recording a video and uploading it. Geographic Information System will do the automated location mapping and the citizen gets a Unique ID to track and receive updates on his or her mobile. The identity of the complainant will be kept confidential if they wish so,” the EC said in an earlier press release.

“It will change the manner in which elections are held in India. Not only will it change the way we file complaints, but the response time also mandates that a team should reach the spot within 30 minutes. We have been having a series of discussions with police officers for coordination and we will also ensure that a magistrate is present to lead the team,” Rajat said. #KhabarLive