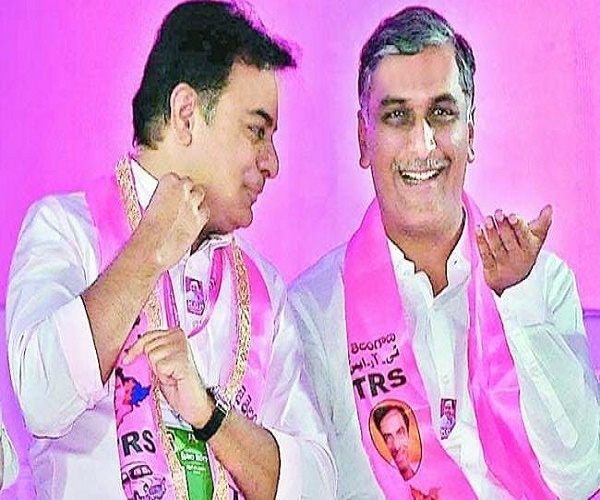 After K Chandrashekar Rao won Telangana Assembly elections for TRS for the second consecutive term in a landslide mandate, rumour mills were abuzz with speculations over his son and minister K T Rama Rao’s bigger role in the next government.

Some even predicted that KTR would be anointed as the new chief minister and father would move to national politics. But KCR decided to occupy the driver’s seat for some more time by taking oath as CM on Thursday.

The very next day KCR appointed his 42-year-old son as the working president of TRS sending out a strong message to the party cadre that KTR would play a much bigger role in the coming days and years.

After the creation of Telangana in 2014, KCR made both KTR and his trusted nephew T Harish Rao cabinet ministers. Till then Harish Rao was considered to be the second-in-command in the party. Some had even predicted that he would succeed his uncle one day.

Harish had been a favourite of KCR during the Telangana movement and he used to enjoy a lot of clout in the party. People used to flock to his house all the time. He was popular because of his affable nature and sharp political understanding. But all that changed in the last five years.

During his first term, KCR gave more importance to KTR making him minister of IT, biotechnology, rural development and panchayat raj. Though Harish got the plum water resources portfolio, his powers were curtailed.

KTR was all powerful and dubbed as the de-facto chief minister. He used to hold all important meetings and was the face of TRS at high profile business meets. The US educated KTR is polished, articulate and a good orator. His contacts and proficiency in English have also played a major role in making him a rising star in Telangana politics.

Harish, who is still a highly popular figure, has won from Siddipet by a whopping margin of over 1,18,000 votes thus creating a record. Since 2004, he has broken his own record in every election. KCR and KTR won by over just 50,000 votes.

Harish still matters in Telangana politics and may not keep quiet though he is unlikely to revolt against his uncle or say something in public. Perhaps he too knows that “time and patience” are the two most powerful warriors.

With the elevation of KTR, the issue of KCR’s successor is more or less settled.

Like MK Stalin in Tamil Nadu, Uddhav Thackeray in Maharashtra, Akhilesh Yadav in UP, Sukhbir Singh Badal in Punjab, finally the son rises above all others.

Harish may even end up like nephews Raj Thackeray in Maharashtra or Manpreet Singh Badal in Punjab. And that is the reality of Indian politics. #KhabarLive