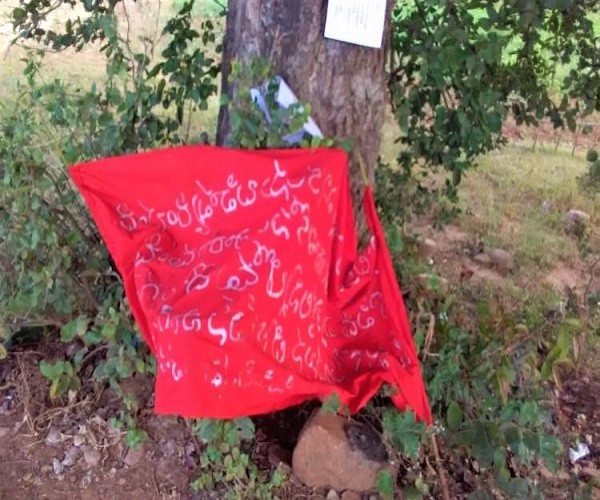 Tension prevailed in Telangana’s Jayashankar Bhupalpally district as posters, allegedly put up by Maoists, were seen near the state’s border, asking locals to boycott the upcoming elections.

The banners and posters came up in the Upedu Veerapuram village in Venkatapuram mandal, around 5 km away from the Venkatapuram police station. Some banners were tied onto poles at the side of the road near a farm, and pamphlets were also found strewn around. One banner was spread out in the middle of the road, held down with stones, which blocked traffic during the early hours of Thursday.

“Boycott the upcoming elections and fight for Telangana. All parties are thieves. Kick out the ruling Telangana Rashtra Samithi (TRS) party which is coming and asking for votes,” one banner, undersigned by the outlawed CPI(Maoist) party, stated.

Locals were also worried as a wire was connected to the banners, which was tied to what appeared to be a detonator. Many feared that attempts to pull down the banner would result in a bomb blast. The police said that the banners were put up on Wednesday night.

Speaking to #KhabarLive, Jayashankar Bhupalpally Superintendent of Police R Bhaskaran said, “They put up some posters along the border last night. It seems to be a sympathiser just throwing some pamphlets and putting up these posters just to show their presence.”

When asked about the wires and ‘detonators’, the SP said, “There were no bombs or anything like that. It was just a dummy with some wires connected to them to trigger panic.”

The district police said that the move will not dissuade voters locally and that all steps were being taken to ensure that locals can vote.

“We have deployed adequate force and are conducting frequent checks. There is no real security threat,” the SP added.

The incident comes just a day after Inspector-General (IG) of Police Nagi Reddy held a review meeting with police officials of the district, as it borders Chhattisgarh. Besides the SP, District Collector Vasam Venkateshwaralu was also present at the meet.

According to reports, officials said that there were 419 locations in the district, where 650 polling stations will be set up. 173 of them have been dubbed sensitive. While the area was once a hotbed for Maoist activity, security forces have managed to bring the situation under control over the past few years.

Local authorities reiterated that there was no need to worry, and that they would make all arrangements to ensure that every person who was eligible could cast their vote. Besides intensifying checks along the border, the police have also taken into custody or have started keeping track of history sheeters to ensure the smooth and fair conduct of elections.

Last month, in a statement sent to some media houses, the CPI (Maoist) called upon people not to participate in what it termed ‘fake’ elections and fight for a “democratic Telangana”. Issued in the name of CPI(Maoist)’s Telangana State Secretary Haribhushan, the statement found fault with the policies pursued by all political parties.

Elections in Telangana are scheduled to be held on December 7 after Telangana caretaker Chief Minister K Chandrasekhar Rao dissolved the Legislative Assembly on September 6. The counting of votes will take place on December 11. #KhabarLive