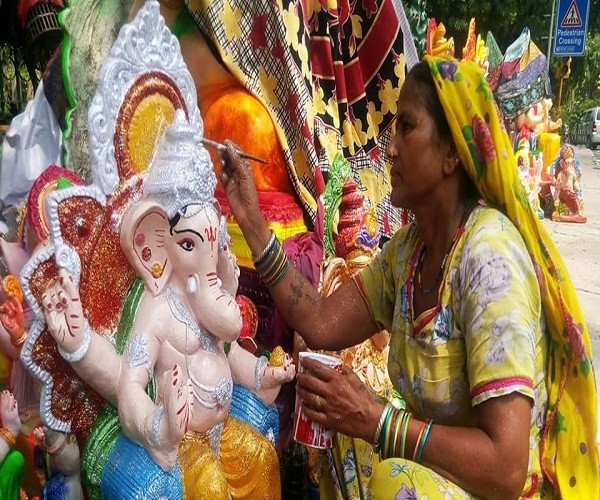 Sometimes, your passion lets you forget all miseries, and what matters is the work you love to do. This is the case with Shanta (who goes by only one name) an idol maker from Rajasthan’s Karauli district living in Hyderabad’s Hayatnagar roadside area since four years.

With no clean water to drink, no shelter, Shanta is dependent on her passion of creating clay idols as a livelihood. Sitting on the dusty footpath in Hayatnagar area, this mother of two is painting her last idol for the day. Her concentration akin to that of a scientist working in a lab for years, unperturbed by all the ambient honking and traffic sounds.

Her hand moves with deftness and precision as she draws intricate strokes on the figurine to which she has just devoted 3 hours. Wearing a faded yellow lehenga-kurti that complements the shimmering yellow dhoti of the idol she’s colouring, Shanta adds the final touches before sale begins. When she’s finished, the statue is placed alongside the hundreds of other beautiful, shiny Ganesh Idols – all lined-up in rows, each vying to catch the eye of a prospective devotee and buyer.

As everyone across the country gears up to celebrate Ganesh Chaturthi – worshipping and celebrating these clay idols in their homes, temples and mandals for 10 days; showering them with modaks and sweets, gifts and flowers – their creators, these artists from Rajasthan, struggle to even meet their meagre daily expenses.

Shanta migrated to Hyderabad four years ago with her husband in search of a better market for her idols. They have been living on the footpath ever since, trying to squeeze into spaces between these godly idols of varied shapes and sizes that are exhibited under a tent. For Shanta, art is worship; these idols, her means of earning. This is an age-old tradition started by her forefathers, and today she and her children are proudly taking the legacy forward.

But life is not easy living in a metropolitan city like Hyderabad. Everyday, waking up with the fervent prayer that at least two idols should get sold, so that they don’t sleep hungry is really taxing. On most days, she’s able to manage, but there are times when not a single piece gets sold.

The nature of gods made and sold, though, vary all through the year. Unsurprisingly, much like many remember God at the time of need, most seek to buy these idols during festive season, with each deity having a season of their own, depending on the festival at hand – and Shanti caters to all. From Goddess Lakshmi on Diwali to this elephant-head Ganapati for Ganesh Chaturthi, the gods change, the seasons change, but it’s work and struggle as usual for this small family. Statues are priced between Rs100 and Rs5,000. After much bargaining with the buyers, they earn petty profits with no chance of saving for the future. Of this, too, they have to pay a ‘mamool or hafta’ for a peaceful week of business and street-lodging.

“It is said that Ganesh comes for 10 days and takes away all the sorrow from your life along with him during immersion, I have thousands of Ganesh’s here, but never have my problems been solved, even a little,” says Shanta, sorrowfully; her crinkling sunburnt skin shimmering with specks of silver dust from the paint she was handling. During the festive season, she manages to sell five-six idols a day, on other days, maybe not even one.

Wistfully, she says it would have been time-saving and beneficial, if they could make the idols themselves using moulds. But due to the lack of water, they have to get raw idols transported from Agra, which ends up raising the costs, barely leaving them with any earning.

But despite the hardship, what shines through is their determination to continue making idols, generation after generation. Shanta and her family are not interested in any other kind of work; they want to continue the legacy of making Idols and take great pride in their work. Even while selecting a bride for her son recently, Shanta was particular that her daughter-in-law should join the family business. They got statue material as dowry and three huge Ganesh idols. Shanta regrets not being able to send her children to school not because then they could have found a better a job or a different means of living, but so that they could have become entrepreneurs and support their family tradition of idol making.

“I wish I had sent my kids to school, and then we would have expanded our exhibition and would have had a better lifestyle,” says Shanta, an artist and businesswoman in her own right.

Not having a TV or reading a newspaper doesn’t come in the way of Shanta’s knowledge of environmental concerns. Water-starved herself, she’s well aware of the need for expensive eco-friendly idols, which she tries to source. But with only one pair of clothing, erratic sales and no secured tomorrow, doing her bit for the planet takes a backseat as she and her family struggle to move ahead — because, as far as Shanta is concerned Ganesh Chaturthis have come and gone, but she and her family have been stuck at the same place ever since they started. #KhabarLive