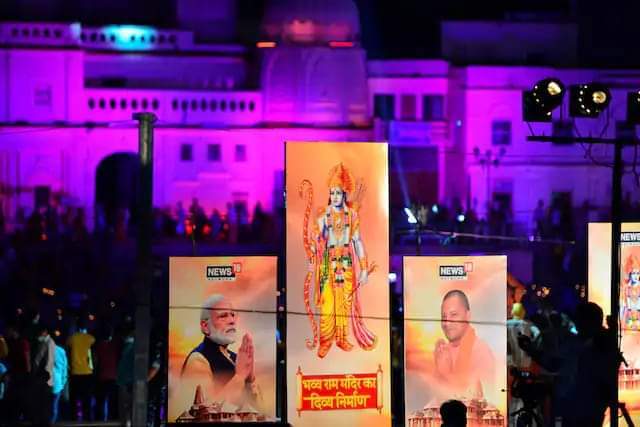 Today, images and renderings of the Grand Ram Temple — which will be built on the the site of the Babri Masjid, an important mosque in Uttar Pradesh state demolished by right-wing Hindu nationalists— will be beamed across giant billboards in Times Square by a U.S. organization to mark the groundbreaking ceremony for the temple’s construction, which will feature Prime Minister Narendra Modi laying silver bricks as the foundation.

Wednesday is also the anniversary of India’s decision to revoke the special autonomous status of Jammu and Kashmir, the Muslim-majority state where 7 million people have been living under a brutal military occupation and Internet blackout. The government is imposing another curfew on Wednesday in a region where thousands of young people have already been arbitrarily detained and journalists are facing censorship.

Thus Aug. 5 will become another infamous date for Muslims in India — a day of increased repression in Kashmir, with the added insult of a grand function in the city of Ayodhya, where the Babri mosque’s destruction led to a nationwide attack on Muslims in 1992.

This is not a coincidence.

Over the past few years, I’ve reported extensively on the rise of majoritarianism and Islamophobia in Modi’s India­, and it has been exacting on the mind and soul to repeat myself in every column, warning the world of the depravity of the regime and the immorality of a populace that has normalized the naked hatred being disseminated in the country, particularly during a devastating pandemic.

In November, the Supreme Court sent a resounding message to India’s 200 million-strong Muslim population by ruling that the destruction of the 16th-century Babri mosque was a criminal offense while also favoring the building of a temple on the disputed site to placate Hindus.

Now the prime minister is celebrating this erasure just as the novel coronavirus continues to rage across India, which has the third-highest number of cases worldwide. The death toll is increasing by the day (India has suffered about 40,000 deaths so far), our migrants are dying of starvation and the home minister has just been admitted to a private facility after testing positive for covid-19 (https://www.hindustantimes.com/india-news/amit-shah-admitted-to-medanta-hospital-in-gurgaon-after-testing-covid-19-positive/story-WcsaUNmUZRfi8h467ugIPM.html).

As a citizen, a journalist and a Muslim, I find it hard not to grow alarmed at the gestures to settle political and religious scores; and every week seems to bring another dystopian development in the ugly slide toward majoritarianism.

On Aug. 1, as Indian Muslims celebrated a somber Eid al-Adha, a video went viral showing a Hindu mob beating a young Muslim man accused of carrying cow meat in his vehicle. The man bled profusely while the mob asked him to chant “Jai Shri Ram” (Glory to Lord Ram). It was yet another attack against Muslims involving beef, since cows are considered sacred to the country’s Hindu-majority population.

But India’s leaders want to change the conversation from the treatment of Muslims. In the midst of the pandemic and when floods have ravaged northeast India and displaced thousands, Indian and international media are parked in Ayodhya to witness the grand celebration. On Wednesday, Modi, surrounded by chants and nationalist luminaries including Mohan Bhagwat, head of the Hindu supremacist organization Rashtriya Swayamsevak Sangh, will place a 22.6-kilogram brick (https://www.opindia.com/2020/07/bhoomi-pujan-pm-narendra-modi-22-kg-silver-brick-foundation-site-ram-mandir/) made of silver to cement his promise of dismantling the fundamentals of a secular, democratic republic.

The inauguration of the Ram temple is meant to allay the Indian middle class and the poor who have borne the brunt of the lockdown and suffered a lot from the economic impact. Modi has used Hindu-Muslim polarization as a potent tool to channel the anger of India’s middle class. The choice of Aug. 5 is yet another reminder of Hindu supremacy in India, symbolic of the transformation of India into a Hindu state.

Then there’s the spectacle planned for Times Square, a reminder that many remain complicit in enabling a fascist regime in India that is turning Muslims into second-class citizens in the world’s largest democracy.

As people continue to protest in support of Black Lives Matter in New York and other cities, giant screens will be endorsing sectarian division and violence.

On Dec. 6, 1992, when Hindu nationalists demolished the Babri Masjid and innocent people were butchered, a generation of Indian Muslims, including myself, was scarred for life. We were witnesses to a communalism that would fester deep in the Indian psyche. As I wrote this, a journalist from NPR called me to ask what the word “Ayodhya” meant to me. The answer: What happened was an attempt to erase my identity and that of a population that chose India as its motherland in 1947 during the partition of the country.

Aug. 5 marks another day in the continuing erasure of India’s syncretic culture, another day of blood and soil in India, with a Modi emboldened by the world’s inaction. #KhabarLive #hydnews