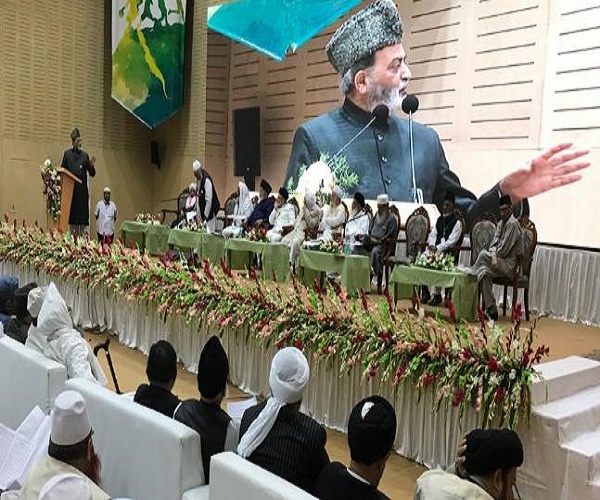 The recent All India Muslim Personal Law Board (AIMPLB) plenary in Hyderabad was a grand success. The three day event was hosted under the stewardship of Owaisi brothers, they played a perfect host to the AIMPLB members by discharging hospitality duties on a high note by making all sort of arrangements from travel, stay to food and comfort.

According to reliable sources, the funds were collected by the ruling AIMIM MLAs from Hyderabadi businessmen who are engaged in unlawful way of earning, they comprised of land grabbers, hawala operators, illegal financiers, bookies and gamblers.

The ruling MLAs on the instructions of party president has approached this forbidden wealth earners to seek funds for the arrangements of AIMPLB plenary meetings and for donation to the board for the purpose of Babri case expenses.

AIMIM MLAs Contributed there One month salary of 16 Lakhs to the AIMPLB. But, annoying is that the remaining funds more than a crore rupees was pulled up from those people who’s source of income is not pure, which it should be needed for the religious cause.

Here, we couldn’t blame totally MLAs mistake for seeking impure forbidden funds, when party president is prescribed the duty to MLAs for funds, they had done according to the guidance of super power.

If our wealth is not pure, than how could we expect a justice in court of law, how could almighty could grand us victory in supreme court, how could our prayers wil get Answered when we utilising the Haram money to seek justice, many muslims opined.

First of all, it’s AIMPLB shouldn’t use political platform, keeping in mind the nature and characters of politicians. And the board should use the religious platform to explore and reconstitute the principles or strategies.

Is It AIMPLB doesn’t the the fact about Most of the 99% Politicians wealth is illegitimate one? They are the renowned Scholars , is it they are so naived to unaware about this?

The highly esteemed respectful AIMPLB has massive followers, including wealthy influential traders, if they just voiced towards there followers, all of them will lined up to donate sum pie of income as a charity towards in cause.

Babri masjid is dearer and long cherished wish of Muslims In india. It’s responsibility lies on shoulders of every Muslim scholar, every Muslim politician and common man to make this long Cherished wish turns up to reality. As a common man prespective, Babri masjid has to be constructed on that place, but what annoyed and worried a lot, is being a common Muslim, the utilisation of forbidden wealth into this Cause. Think about it. #KhabarLive