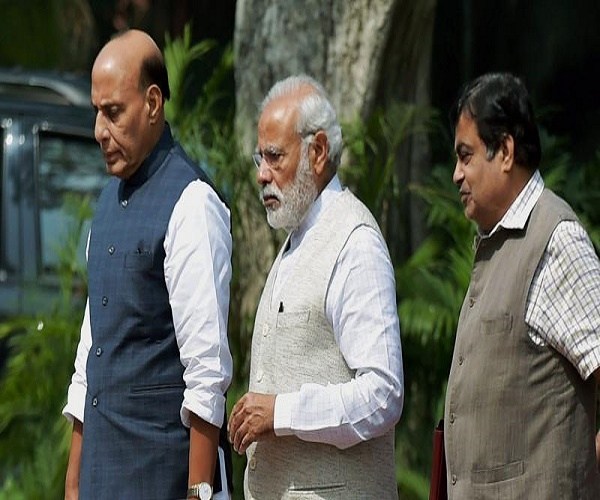 The Janata Dal (United) and the Shiv Sena are expected to play a major role post polls in determining who, or who will not be the Prime Minister of India if the Bharatiya Janata Party falls short of a clear majority and emerges as the single largest party. [#KhabarLive will run a series of stories under the hashtag #IndiaVotes2019 with expert views, news analysis, commentary and special columns from eminent election analysts in our panel.]

Permutations and combinations are now part of political strategy, with virtually every leader discussing the post-poll outcome with perhaps even more vehemence than the actual campaign, and a certain consensus that Prime Minister Narendra Modi will make it for a second term only if he manages a full majority.

Any numbers that leave him dependent on allies, even if the BJP emerges as the single largest, might trigger off a process leading to a change in prime minister in the next government.

Nationalist Congress Party leader Sharad Pawar gave voice to the flood of murmurs within, “I don’t think that Narendra Modi will become PM again as the BJP will not get the required number in the elections. However, the BJP may emerge as the single largest party which cannot form the government without the support of other political parties. If the BJP takes the support of other parties to form the government, then the parties which support the BJP will look for someone else as their prime minister,” the wily Maharashtra politician said.

The BJP had secured 282 Lok Sabha seats in the last elections, enough to form the government on its own. Along with the NDA alliance the figure was a good 326 members in the Lok Sabha.

Popular political wisdom places the numbers for the BJP lower this time round, with party insiders themselves speaking in the range of 30-100 fewer seats for the party. Sources said that any number less than 250 for the BJP would trigger off demands for a change in leadership, with the JD-U and Shiv Sena in alliance with the BJP in Bihar and Maharashtra respectively, expected to oppose PM Modi for the top job, according to sources.

After Balakot the hype had compelled even BJP leader Nitin Gadkari to make his peace with the prime minister, in comments that were seen as a toning down of his earlier critical statements. “I have nothing to do with it. I am not in the race. Modi ji is the PM and will become prime minister again. I am from the RSS. Our mission is to work for the nation. The country is progressing in terms of development and growth under Modi ji’s leadership. I have come as a supporter in this work and will do whatever work is assigned to me for the country. Where does the question of my becoming PM arise?” he said.

ALSO READ:  How Misogyny Keeps Young Girls From Getting Medical Attention And Leads To Avoidable Deaths?

With the dust settling on the Pulwama-Balakot-Nowshera developments, the focus has returned to the PM post with Gadkari and Rajnath Singh both being mentioned again in BJP circles as possible contenders in case PM Modi is denied a full majority. The response to a ‘who will win’ question by reporters now receives an almost stock response, ‘BJP will win but Modi might not be the PM’.

Significantly, according to well placed sources the opposition will come from within the NDA first, with the JD-U and the Shiv Sena that remains an open critic of the BJP under PM Modi, expected to cast the first stone for a change in leadership. The Opposition parties being targeted for support by Amit Shah, including Naveen Patnaik’s Biju Janata Dal, have also made it clear in closed meetings to others that they will not support a government under PM Modi.

It is imperative for Modi-Shah thus to ensure a huge victory, and the Balakote propaganda supported by the chest thumping media cacophony, has had a decisive impact on what are referred to as ‘martial races’. A senior opposition leader said that the Maratha vote in Maharashtra, the Jats in UP and Haryana, along with the Rajputs in Rajasthan were heavily impacted by the Balakot action.

However, all spoken to including BJP leaders said that the impact was slowly wearing off, with ratings high for PM Modi but down from the initial days after the strikes according to ground reports. To what extent they slide will depend largely on the Opposition’s ability to shift the focus back onto issues of unemployment, agrarian distress, the faltering economy and high-level corruption.

The opposition within the NDA to PM Modi and Amit Shah is strong, according to sources. Allies JD-U and Shiv Sena have no “problem” with the BJP but basically with the prime minister and the BJP chief who are seen as authoritarian. To what extent this will influence the post poll scenario in case the BJP emerges as the single largest party remains to be seen. But the current murmurs, revived after the Balakot break, do seem to echo Pawar’s remarks. #KhabarLive