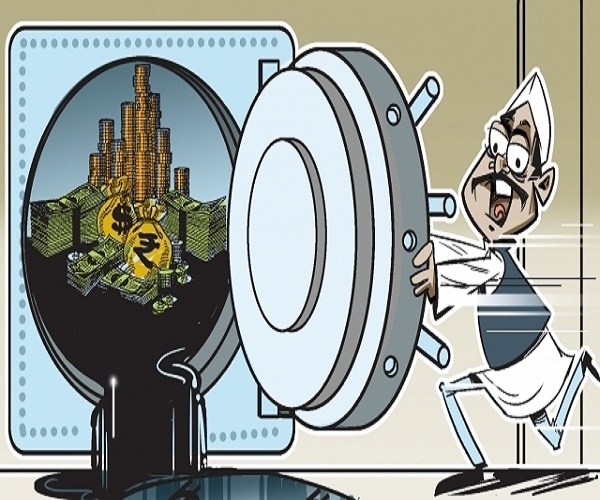 On March 12, the Supreme Court was indignant that the Central government had not set up a permanent mechanism to keep a tab on the disproportionate income of politicians, for which it had issued an order last year. In February 2018, the court was shocked to learn that the assets of some legislators, their kin and associates had gone up by more than 500% between two elections — and it wanted serious action.

What, however, goes unaddressed as yet is equally reprehensible — political funding has been made more opaque and unaccountable in recent years, paving the way for easy money (read: unaccounted money) to come in and influence policies and regulations. Multiple petitions challenging legislative changes made to facilitate such funding are pending before the Supreme Court and Delhi High Court.

Electoral bonds are opaque, hide funding source
To justify the introduction of electoral bonds, Finance Minister Arun Jaitley had written in January 2018 that “…a scheme of electoral bonds was announced to enable ‘clean money’ and substantial ‘transparency’ being brought into the system of political funding”.

What has actually been done is exactly the opposite.

The electoral bond was brought in through the Finance Act of 2017, which introduced multiple amendments in the Representation of the People Act (RP Act) of 1951 and Companies Act of 2013, jeopardising transparency in political funding. The Election Commission of India (ECI) strongly objected to these changes and wrote to the Law Ministry, seeking reversal of the amendments.

Key amendments — and the ECI’s objection to each — are the following.

One, section 29C of the RP Act was amended, taking the donations received through electoral bonds out of the ECI’s scrutiny. This was done by inserting a new proviso: “Provided that nothing contained in this sub-section shall apply to the contributions received by way of an electoral bond”.

The ECI described this as (a) “a retrograde step as far as transparency of donations is concerned and this proviso needs to be withdrawn” and (b) commented that now “it cannot be ascertained whether the political party has taken any donation in violation of provisions under section 29B of the Representation of the People Act, 1951, which prohibits the political parties from taking donations from Government Companies and Foreign sources”.

Two, the amendment in section 13A of the Income Tax Act disallowed cash/anonymous donation exceeding Rs 2,000 to a political party — but the cash limit under section 29C of the RP Act governing elections continues to remain Rs 20,000, thus making no material difference to accountability and transparency of political funding.

Three, the Companies Act of 2013 has been amended: (a) to omit first proviso of section 182(1), which reads “…the aggregate of the amount which may be so contributed by the company in any financial year shall not exceed seven and a half per cent of its average net profits during the three immediately preceding financial years”; thus removing the limitation of 7.5% and the section now reads “any amount” can be contributed (b) to replace “any amount or amounts” in section 182(3) with “total amount”, to remove “and the name of the party to which such amount has been contributed” in the profit and loss statements.

The ECI objected to these as well — saying that such amendments (i) “opens the possibility of shell companies being set up for the sole purpose of making donations to political parties, with no other business of consequence having disbursable profits” and (ii) “would compromise transparency”.

Though the ECI’s concerns are shared by the Law Ministry and Finance Ministry, the Central government has sought to brazen it out, telling the Rajya Sabha that no such concerns have been expressed by the ECI.

A few years ago, the ECI would have called repeated press conferences, written multiple letters to the GOI and put its objections in the public domain but things have changed. Its objections to the Law Ministry had to be accessed through the RTI applications.

True, the Central government also inserted section 182(3A) in the Companies Act of 2013 (through the Finance Act of 2017) to say that contributions by way of electoral bonds be made by “account payee cheque drawn on a bank or an account payee bank draft or use of electronic clearing system through a bank account”.

It also clarified while issuing notification for electoral bonds in January 2018 that (i) the purchaser must fulfil the extant KYC norms and make payment from a bank account (ii) a random serial number invisible to the naked eye is given to such bonds and (iii) the bond issuing bank (SBI) will not share the serial number of bonds with anybody, including the government and users.

But none of these actually addresses the concerns of anonymity of the donor, transparency in political funding or brings it under the ECI’s scrutiny.

The KYC norm will actually let the bank (SBI) know the donor and by extension, the government controlling it, but not the ECI or citizens. To say that the SBI will not share the information with the government is a vacuous argument. It is thus an advantage to the ruling dispensation all the way.

In fact, when the electoral bond was introduced, the Association for Democratic Reforms (ADR), which works for electoral reforms and has filed a petition challenging it in the apex court, had warned that this move would benefit the ruling party at the cost of the opposition. Its words have proved prophetic.

The Supreme Court’s next hearing on a bunch of petitions challenging these amendments in various statutes for issuing electoral bonds has been fixed for March 26. Hopefully, the court would show indignation at the Centre for going ahead with such amendments through the Money Bill route (by way of Finance Bills) to bypass the Rajya Sabha, to the detriment of transparency and accountability in political funding.

On te other hand, while electoral bonds have added anonymity to political funding and raised the concerns of the Election Commission of India, organisations and individuals fighting to clean electoral funding, amendments to the Foreign Contribution (Regulation) Act (FCRA) have added a new fear — foreign companies influencing our political parties and through them, the governance of the country.

Contravention of any provision of the FCRA attracts up to five years of imprisonment and/or with fine. Section 29-B of the Representation of the People Act of 1951 also prohibits political parties from receiving funds from foreign sources and government companies.

A ‘foreign source’ has been defined under both the FCRA 2010 and 1976 to include any company with a foreign shareholding of more than 50%.

Violations of both funding from foreign sources and government companies reportedly by the BJP and Congress were noticed and challenged in the Delhi High Court. In 2014, the Delhi High Court held that both the political parties were guilty of violating the FCRA and RP Act and asked the Central government to take punitive action within six months.

The 2016 amendment inserted a proviso — “Provided that where the nominal value of share capital is within the limits specified for foreign investment under the Foreign Exchange Management Act (FEMA), 1999, or the rules or regulations made thereunder, then, notwithstanding the nominal value of share capital of a company is more than one-half of such value at the time of making the contribution, such company shall not be a foreign source”.

This change means that if the foreign shareholding in an Indian company is within the limits of foreign investment prescribed for the sector under the FEMA or the rules and regulations framed under it, the company will not be treated as a foreign source — even if it holds more than 50% shareholding.

This means foreign companies can continue to donate to political parties, even while the Central government has tightened foreign funding to NGOs like Greenpeace India and cancelled the FCRA licenses of thousands of NGOs in the past few years.

Weeks before his retirement in November 2018, the then-Chief Election Commissioner OP Rawat said, “The EC has been of the view that no foreign funding for elections should be allowed”. But what action the ECI has taken to reverse the changes is not known.

At least two petitions are now pending before the Supreme Court and Delhi High Court to force the Central government to act against the BJP and Congress for reportedly violating the FCRA Act and reverse the amendments made. These political parties were accused of violating the FCRA and RP Act by apparently accepting funding from foreign sources and government companies like STC and MMTC.

Why is it important to regulate or check political funding?
Political parties are very important because they are the gatekeepers of democracy; they fight elections, form governments and pass legislation. Therefore, their funding has a great bearing on the functioning of our democracy and instruments of government.

The Law Commission of India, in its 2015 report on electoral reforms, lists three key reasons to seek transparency and reforms in political funding.

Two, there is widespread prevalence of black money, bribery and quid pro quo corruption which helps candidates fund their campaigns. It quotes the Supreme Court affirming the conclusions of the National Commission to Review the Working of the Constitution (2002): “The sources of some of the election funds are believed to be unaccounted criminal money in return for protection, unaccounted funds from business groups who expect a high return on this investment, kickbacks or commissions on contracts etc.”

Third, unregulated or under-regulated election financing leads to two types of capture: (a) industry/private entities use the money to ensure less stringent regulation and (b) money used to finance elections eventually leads to ‘favourable policies’ — that is state and regulatory captures.

The way forward
It would be instructive to keep in mind that reversing the amendments being discussed would not be easy. Old timers would recall how the previous NDA government had, in 2002, tried to overturn the Supreme Court’s ruling ordering all candidates to file their criminal antecedents, along with educational and asset details, in their election affidavits. The then-NDA government had issued an ordinance first and then introduced a Bill in the Lok Sabha to block the apex court ruling. When it was brought to the notice of the apex court, the latter promptly struck down the amendment as unconstitutional.

Needless to say, the Supreme Court and Delhi High Court need to step in and reverse the amendments in different statues to bring transparency and accountability to electoral funding — as also to stop funding from foreign sources in the interests of a healthy democracy. #KhabarLive