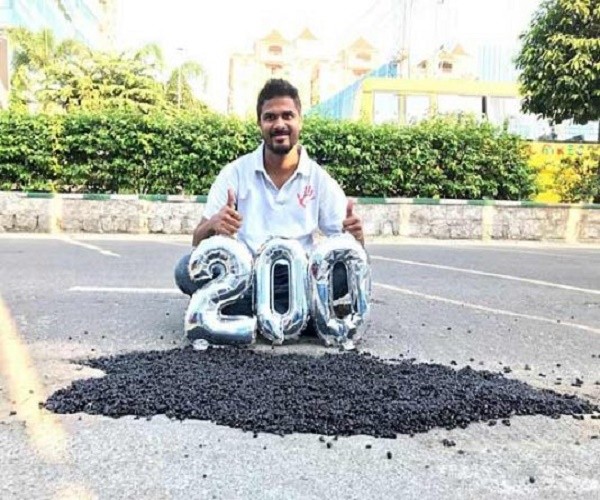 This has not only brought him closer to people, but has also given him ‘a learning and transformative experience’. “Be the change you wish to see” is a popular quote attributed to M K Gandhi and Karthik Pallam, a techie from Hyderabad is testimony to that.

While many just rant on social media about the abysmal condition of the pothole riddled roads, Karthik has taken it upon himself with his group ‘We Can Make A Change’ to fix the roads in the city. For this, Karthik was recently awarded at the iVolunteer Awards 2018.

“I was working in Bengaluru earlier and the roads there were horrible. For two months, as I drove to office every day, it saddened me a lot and I wanted to do something. I then shifted to Hyderabad and realised the roads here aren’t any different and I felt it’s better to just fix them instead of complaining,” explains Karthik, on what motivated him to take up this mission.

Karthik looked around for help but friends were either hesitant about working on the roads or laughed at his attempts saying it’s the job of government and not his. He then went about searching for material to fix the roads and found a supplier in the city. “Once I found the supplier to buy cold emulsion to fix the potholes, I knew there was no going back, regardless of whether I got help or not,” he says.

After buying the material, a pothole at Cybertowers was fixed in June 2017. “Friends were still skeptical but a few agreed. We decided to work early in the morning when there’s no traffic,” he said to #KhabarLive.

Later, Karthik approached the same supplier and asked for a discount, telling him he is doing it as a social work and fortunately for him, the supplier agreed. Things started falling in place and he started gaining support and appreciation. They then started being active on social media to get information about potholes.

The group has fixed more than 200 potholes so far and Karthik says, “I noticed that bus stops are filled with posters, paan spits and are usually filthy. I felt they should also be cleaned and beautified. Since then, we fixed 13 spots in the city. We also adopted an anganwadi school in Sircilla district and completely revamped it to make it child-friendly.”

His efforts despite the ridicule and mockery that he faced initially, received appreciation from the public and the government. In fact, according to Karthik, the Collector of Sircilla took over his model of revamping schools and has revamped more than 10 schools in the district. #KhabarLive