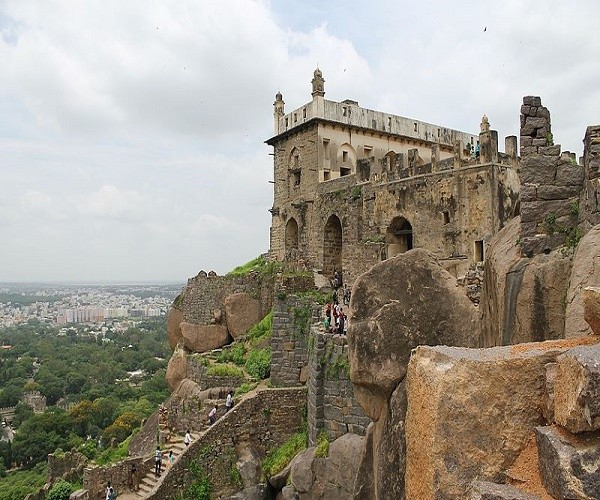 Golconda Fort came into existence 500 years ago. A fort which once stood tall in Hyderabad, is in ruins. Even then, the walls still ring with the stories of yore.

It has been 500 years since the Golconda Fort came into existence. At one point in history, the fort was the pride and glory of the land, standing tall and regal—filled with treasures which are unimaginable today!

Yet, with constant ransacking and battle, the once magnificent fort gradually fell into disrepair.

Today, the Golconda Fort (or what’s left of it) stands in Hyderabad, with walls that tell many tales.

1. The Journey of the Koh-i-Noor Diamond and Other Gems

The region was famous for its mines, especially the Kollur mines, which extracted some of the most precious gems in history. Some sources argue that at the time, India was one of the only places where diamonds were mined. Golconda became the hub for diamond cutters, during the reign of the Kakatiya dynasty. The mines brought prosperity to the several rulers of Hyderabad, including the Qutb Shahis and the Nizam, until the Indian integration of Hyderabad.

In fact, the fort at one point housed precious diamonds such as the Hope diamond, Nassak diamond, and the Koh-i-Noor diamond, one of India’s most precious gems.

2. The Beginnings of the Fort

The original Golconda Fort is rumoured to have been constructed during the Kakatiya empire when a shepherd boy discovered an idol of a god on the site.

It is believed that the name Golconda is inspired from “Golla Konda,” meaning “Shepherd’s Hill.”

The initial structure was made out of mud and was later expanded by rulers such as Rani Rudrama Devi, and the Qutb Shahi Empire, who expanded the fort so that the 7-kilometre outer wall encompassed the city.

The fort itself became a seat of power for different dynasties. It started with the Kakatiyas, moving onto the Musunuri Nayaks, the Bahmani Sultanate, and the Qutb Shahi dynasty before the Mughals breached its walls, led by Aurangzeb.

3. The Ransacking of the Fort

It is believed that the Qutb Shahi dynasty had received hostile attention, due to its connection to Shambhuji and believed “Hindu influence,” which the emperor took offence to. To add salt to the injury, a letter sent by Abul Hasan (the then-sultan) to his officer in the Mughal camp was intercepted, in which Aurangzeb was referred to as a “mean-minded coward”.

This was enough to infuriate the fragile ego of Aurangzeb who immediately sent Prince Shah of Alam to attack Hyderabad. This effort, however, was met with resistance.

Attack after attack was blocked, and the fort held out for around eight months.

Eventually, it was treason which gave Aurangzeb control of the fort. Abul Hasan’s army was bribed with the offer of money, and the gates were thrown open to attack. Only one soldier, named Abdur Razzaq Lari, refused his offer of money and fought valiantly in defence of the fort. He sustained as many as 70 wounds to his person and is believed to have survived.

Almost every tourist who enters the fort, claps. Why? Simply because one clap is all it takes to discover the wonder of the acoustics.

A clap inside the grand portico under the dome can be heard in the Bala Hisar pavilion, almost one kilometre away!

It is the carefully constructed arches within the walls that are the secret to the astonishing acoustics housed in the fort. The architects of Golconda are believed to have created it so that an army chief could listen to what his sentries were doing.

Materials that were known for their sound reflection properties were blended into the material that went into the walls, which can be seen in the echoes today. For example, according to a report by The Hindu, a stamp on one of the black stones in the prayer hall creates seven distinct echoes!

It is rumoured that there is a secret underground passage which connects the durbar halls from the top to one of the palaces at the bottom of the hill. It was meant as an escape route for the royals, but it has not been found till date.

The queens of yore believed that looking into a mirror could increase the dark spots on one’s face, so instead of mirrors, the fort was equipped with water pits, from which they could see their reflection.

The security measures of the fort are also impeccable. The entry gate was purposely kept slightly narrow so that if an army were to attack, an elephant would be unable to hit the door directly. Even if the wall was breached, there was a cannon placed at the entrance which would expel hot oil on enemies, as an added security measure.

During the hot summer months, ventilation was such that the hot winds of summer would turn cool. The mechanism used a water tank, which would cool the breeze.

Today, the Golconda Fort which stands on a granite hill in Hyderabad is just a shadow of its former beauty. Even then, just a walk through its hallowed halls, and not one person can deny the brilliance of the structure.

One has to wonder, how breathtaking was Golconda Fort in its heyday? What other secrets do these walls hold? Maybe, time will tell. #KhabarLive