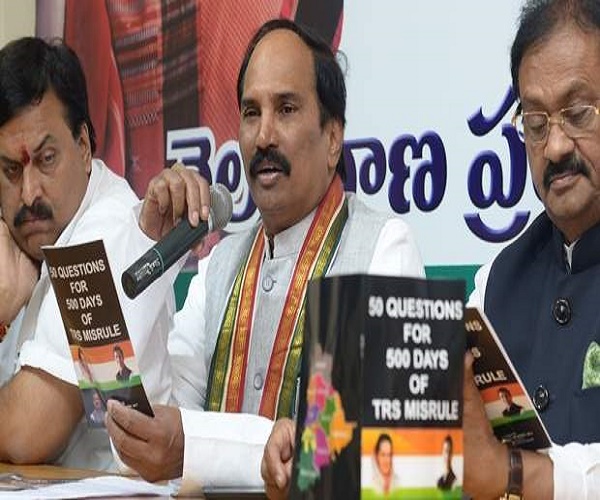 Telangana Congress leadership, which has undertaken a challenging task of uniting all political forces in Telangana against the State government in order to realise its dream of gaining power in the State, seems to be finding it hard to put its own house in order.

Even as the AICC high command is trying to unite all opposition parties and people’s organisations in Telangana including the Telangana Joint Action Committee (TJAC) headed by M Kodandaram, party seniors have been crossing swords with each other in each district. Internal squabbles among party seniors have become order of the day in each district despite efforts being put in by AICC state affairs in-charge RC Khuntia to make peace between the warring factions.

Erstwhile Nalgonda district is a classic example of how differences are still continuing among the party seniors. In the district to which TPCC chief N Uttam Kumar Reddy and Leader of Opposition K Jana Reddy belong, the grand-old party is witnessing open dissent expressed by none other than their senior colleague and former minister Komatireddy Venkat Reddy.

Venkat Reddy, who has been on warpath against TRS ever since his close aide Boddupalli Srinivas, husband of Nalgonda municipal chairperson B Laxmi, was murdered, on Friday too declared himself as the Congress candidate from the Nalgonda Lok Sabha seat in the ensuing general elections.

Reddy, who is said to be unhappy with his party high command’s decision to continue Uttam Kumar Reddy in the top post, further said that though he is the CM candidate from the party, he would opt for LS polls in order to make the party win all Assembly segments that fall under Nalgonda LS seat. He made this statement four days after the TPCC chief Uttam Kumar Reddy had categorically stated that the party had not finalised anybody’s candidature for the next General or Assembly polls.

Infighting among party seniors in the erstwhile Mahbubnagar district is also a known fact. There is no agreement between former minister DK Aruna’s group and ex-Union minister S Jaipal Reddy in the district. Same is the case with the erstwhile Karimnagar, where former MP Ponnam Prabhakar and ex-minister D Sridhar Babu are at loggerheads with each other over organising protests on the failures of the State government.

The way both leaders always undertake separate protests on people’s issues proves this. Lending credence to this argument, Renuka Chowdary on Friday took out a rally with farmers in Khammam, demanding that the government come for the rescue of farmers, who grow Subabul in their fields. Similarly, there is no unity among party seniors in erstwhile Adilabad, Nizamabad, Warangal, Rangareddy and Hyderabad too.

ALSO READ:  Why 'Y-Security' Given To Actress Kangana Ranaut?

Continuing his tirade against Congress, IT minister KT Rama Rao has said that the party is responsible for all the woes faced by people of Telangana in the past 58 years as its government had forcibly merged the region with the then Andhra state against the wishes of Telangana people in 1956.

“Even though the Fazal Ali Commission report opposed the move for merger of Telangana with Andhra state, the then Prime Minister Jawaharlal Nehru formed erstwhile united state by merging Telangana with Andhra against wishes of people of our region. In 2014 the Congress-led UPA government at the Centre was forced to separate Telangana and accord statehood to it because of the massive movement built by the TRS,” KTR said while addressing a public meeting at Turkayamjal in Ibrahimpatnam Assembly constituency on Friday. #KhabarLive