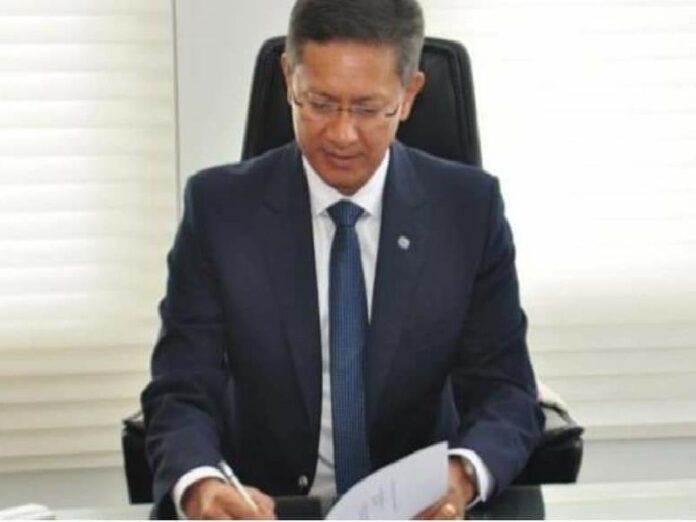 Meeting Gautam Damodar Sawang, one would never imagine him to have been born in Assam — the DGP has adapted Andhra culture and language so well.

Not that it matters to Sawang, as he believes his work is his identity. Having been allotted the Andhra Pradesh cadre upon joining the Indian Police Service in 1986, Sawang took upon himself to overcome the linguistic and geographical hurdles, and he has done a fine job of it.

In a free-wheeling conversation with #KhabarLive, Sawang reveals that he himself wanted to be an IAS officer but his father advised him to join the police forces as it would bring more opportunities to serve the nation. He now feels that he wouldn’t be doing anything else.

A self-confessed workaholic, Sawang has risen up the ranks — from ASP in 2000 to being appointed the DGP of Andhra Pradesh in 2019. He also holds the rare distinction of having served in the United Nations (UN) as a Police Commissioner, United Nations Police, from 2008 to 2012. 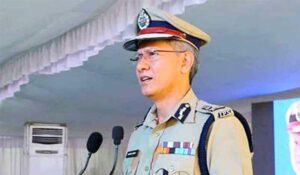 I was born in Assam and spent my initial years in Arunachal Pradesh. I did my schooling in various states — Meghalaya, Shillong,

Lakshadweep and Tripura. The last couple of years of my schooling was in Delhi. This was because my father was in government services. My parents hail from two geographical extremities of our country, the states of Arunachal Pradesh and Kerala. My mother was the first in her family to get married to an outsider as my father is from Kerala. I did my Graduation from Loyola College, Chennai. My native place is Khonsa in Tirap district of Arunachal Pradesh which is one of the most backward places. I got exposure to various cultures and languages because I studied in different parts of the country.

It was more of my own quest and exposure I got from my parents and society that I chose this profession. I actually wanted to become an IAS officer and then I thought about foreign services. It was at this point of time my father advised me that I could do more if I was in police services. He said ‘you can make a direct impact if you are in police services’. I was selected for Indian Police Services while doing PG from Delhi University. I have no regrets about joining the IPS. I feel I have been really fortunate and it’s God’s Grace that I have been given this opportunity to serve and make a difference. Any way you can make an impact and bring about change matters.

Ours was a love marriage — we knew each other since childhood as our parents were colleagues. We both come from a similar background; she also hails from the Northeast. We have a daughter and a son. My wife Shilloi Sawang has been the anchor of the family. Without proper anchor, life would have been difficult to balance. In fact, I am very fortunate to have somebody like her who took care of everything and allowed me to devote 100 percent to my profession. I am nothing without my work and there were so many things I couldn’t do. She took care of everything; I am really blessed to have her in my life. 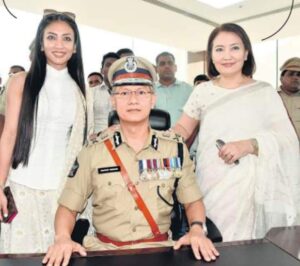 My daughter has been in the USA for the last 10 years, she works at Facebook. She had thought about joining IAS but I encouraged her to look beyond conventional careers since the world has opened up now and there are so many other interesting things to do.

Civil service is more of self service; you have nothing but yourself and serve society. Conditions are becoming more and more difficult and with globalisation taking place, the scope is really vast.

My daughter is passionate about whatever she does so I encouraged her to explore. She’s ventured into the corporate world and is now a senior manager at Facebook. Our son is a sound engineer and more into the world of music. He did his bachelor’s degree first and then pursued his bachelor’s degree in audio in Australia. I strongly feel one should always pursue their passion because that’s what gives you happiness for life.

ALSO READ:  Few Interesting Facts About 'Hyderabadis' Which Makes Them Proud Among 'Indians'!

There are not many IPS officers in India who got the opportunity to serve in the United Nations. I am really fortunate to have got this rare opportunity. Personally, it was a real learning and very satisfying experience. I learnt about the best practices followed globally and also got an opportunity to work with other verticals of the United Nations. We worked along with 17 other agencies and all these agencies that came together to develop a framework. I headed Security and Rule of law within that framework. And all these things gave tremendous exposure and this was only outside the policing domain. So working together in programme implementation, programme overside-overview, police management, how do we really strategise and then identifying these areas of intervention and working together with all the stakeholder agencies was an amazing learning experience.

Doreen Mazuba Malambo, a Zambian police officer who has been declared United Nations Woman Police Officer of the Year for 2020 thanked me for nurturing her professionally during my stint as the UN Police Commissioner in Liberia from 2009 to 2012. I was very touched by her gesture of remembering how I nurtured her and encouraged her. Such gestures give us a lot of satisfaction.

Reaching out to the Naxal-affected

We conduct multiple activities to bring the police close to the people, including organising sports and games. We distribute cricket kits among villagers and conduct cricket, basketball, volleyball matches as well as carrom board competitions. We also introduced the concept of ‘shramdan’ by bringing the villagers together to work for development of the village. Such kind of activities helped bring people close to the police and bridge the gap that had helped the Naxalites to take advantage of.

ALSO READ:  Is Jagan Govt In AP Heading To A Debt Trap?

I really enjoyed my time in Warangal from 1992-1994 and then my stint as SP, Mahbubnagar. Since 2000, I worked as DIG of Warangal and Karimnagar Ranges, DIG Anti-Corruption Bureau and headed the state Special Intelligence Branch (SIB) dealing with Left Wing Extremism which was again a very memorable posting. I really enjoyed my work in all these districts. Later, I was posted in Chhattisgarh and this posting too was among my most memorable. I was also amongst the founder-members of the elite force ‘Greyhounds Force’.

Home is where the art is

Apart from policing and related subjects, I have varied interests — I find immense joy in music, reading, fine arts, history, nature and fitness. Even though I hardly get time to do all the things, I really love to travel when I do. I like to go hiking, visit beaches and see new and adventurous places. After my work, I read a lot about new trends and what’s happening around the world. I call my children and talk to my friends whenever I get time after work. I feel I have missed a lot in life because of my busy and demanding profession but whenever I get time or the opportunity, I like to spend time with young and happy people because we deal with abnormal situations. We see the very harsh side of people on a daily basis so spending time with young and happy people is a big relief. #KhabarLive #hydnews