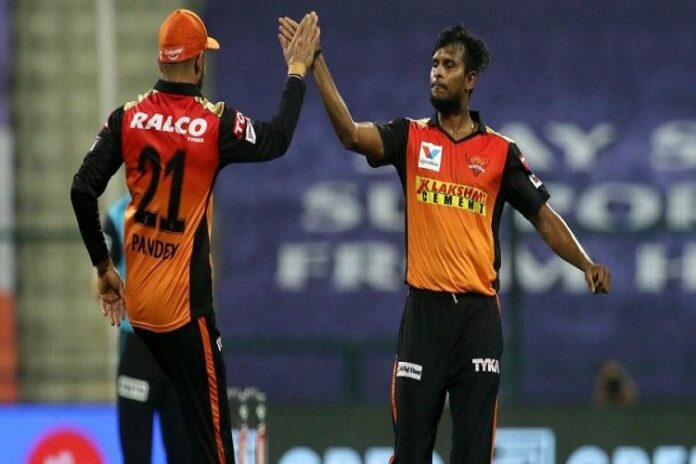 Natarajan could pursue cricket is itself a story of great grit and determination. His father was a porter at the railway station, his mother was a daily wage labourer. But none of that stopped Natarajan from making his mark in the local cricket circles, and then moving a step up the ladder to the lower divisions in Chennai cricket.

Thangarasu Natarajan was in a fix. The wandering player from a village called Chinappampatti, 36 kms from Salem in Tamil Nadu, was used to a constant schedule of cricket for his earnings. Now here was the lockdown, and he was trapped at home. There was no cricket to play, and he could not get to his club in Chennai, nearly 350km away.

Natarajan decided to make it work for him. He began an exacting training routine on the grounds of the cricket academy he had built himself two years back – the first such facility in his village. Because he did not have weight training equipment, he worked with cumbersome 20 litre water jars. He pulled and pushed the wicket roller all by himself.

Natarajan had warmed the bench for the entirety of the last two editions of the IPL, he was hoping he would make this one count.

During recent SRH match, he did just that – bowling yorkers at will en route to Sunriser Hyderabad’s win over Delhi Capitals, and returning with figures of 4-0-25-1.

Brett Lee gushed about him. Virender Sehwag and Scott Styris too.

Bharat Reddy, the former India keeper and Natarajan’s boss at his Chennai club, said that the fitness work was crucial.

“You see his fitness, he has put on muscles, it gives you a lot of confidence when you are fit,” said Reddy. “Maybe Natarajan didn’t have time to work on his fitness earlier. He was playing some match here or there. The Covid period of six months has really helped.”

Reddy said he told all his players at Jolly Rovers, a local club, that they needed to put in the work, and send him videos.

“It is a bad habit that I don’t trust anybody, so I told them to put the date and time of the video,” Reddy said.

For his childhood friends and those who’ve played local cricket with him, his yorkers on Tuesday were not a surprise. In tennis ball pick-up games around Salem, Natarajan was famed for his toe-crushers.

“He could bowl six out of six yorkers,” said his friend Jayprakash, who has been playing tennis ball games with him since 2009. It was Jayprakash who pushed Natarajan towards a career in cricket, and on Tuesday, in gratitude, Natarajan’s jersey sported the legend “JP Nattu”.

That Natarajan could pursue cricket is itself a story of great grit and determination. His father was a porter at the railway station, his mother was a daily wage labourer. But none of that stopped Natarajan from making his mark in the local cricket circles, and then moving a step up the ladder to the lower divisions in Chennai cricket. Then he had to overcome an injury and work on his bowling after it was pointed out to him that his action may be suspect.

Then he made it to the Tamil Nadu Premier League, which is where he was spotted by Kings XI scouts. He got picked for Rs 3 crore by the Punjab team in the 2017 auction. He did not do well enough for them to keep him in 2018, which is when he moved to SRH. Though he had to wait a long while to get another chance, Natarajan had kept himself busy paying it forward.

“After the 2017 IPL he set up a cricket academy in the village where coaching is free,” Jayprakash, who helps manage the academy, said. “He built a house and his parents don’t work anymore.”

From tennis ball yorkers to doing it on the big stage with a leather ball is a big leap; for one, yorkers, like bouncers, take a lot more physical effort than stock balls. That’s where, Reddy, said, Natarajan’s fitness work is helping him.

“If he bowls like this for the next three four matches, he will go to the next stage,” Reddy said. #KhabarLive #hydnews