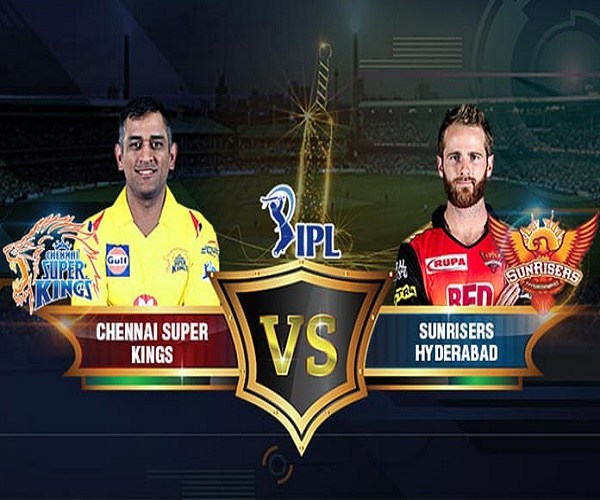 Just when it was looking like easy peasy for most of the teams and dead-end for Rajasthan Royals in the ongoing edition of Indian Premier League, Rajasthan Royals and Royal Challengers Bangalore announced their contention with a win each to their name. Their win has not only kept them in the hunt for the playoffs but has also opened up the competition beautifully.

Having said that, Chennai Super Kings still conquer the table and their qualification looks certain. They’ll be up against Sunrisers Hyderabad in their upcoming fixture which is to be played at MA Chidambaram Stadium, Chennai. Chennai have been almost invincible while playing at home and it certainly won’t be easy for the Sunrisers. However, considering the form David Warner and Jonny Bairstow are in and with a seriously good bowling attack, the Sunrisers will not be an easy side to face.

A win here will almost ascertain a playoff berth for the home side whereas, for the visitors, it will be an opportunity to reinforce their position in the top-four and possibly move the top spot at the ladder. With both teams having a lot to gain, it promises to be a humdinger of a contest.

MATCH PREVIEW
CHENNAI SUPER KINGS
A lot unlike Chennai Super Kings who are known to be very consistent, they have lost two back to back games which will certainly be playing on their mind. A lot of that has to do with how their top order has fared in the last two encounters. Shane Watson, Faf du Plessis, Kedar Jadhav, and Suresh Raina all failed to even get a start.

Despite the fact that CSK, at the top of the table, not everything has gone right for them in the tournament so far. Almost all of their wins have been set up by their bowlers with Deepak Chahar, Imran Tahir, and Harbhajan Singh playing key roles. It was all similar in their last match as well where their bowlers did a reasonably good job to restrict the power-packed batting lineup of Royal Challengers Bangalore, but batsmen failed to chase down the target despite poor bowling conditions.

Overall, it has been a remarkable effort from Chennai Super Kings so far to win most of their matches considering their visible vulnerabilities. Despite having the highest average age among all IPL sides, CSK have been one of the safest sides in the outfield. Another reason for their success goes to the experience which has helped them to close the match almost always despite being in crunch situations. With MS Dhoni in fine form along with Faf du Plessis and Suresh Raina, there is no reason why CSK can not bounce back to the winning ways.

SUNRISERS HYDERABAD
Exactly contrary to the team they’ll be up against tomorrow, Sunrisers Hyderabad have bounced back to the winning ways after having a poor run in lasting for three matches. The return of their regular skipper in Kane Williamson have proved to be just the kind of tonic they needed. Coincidentally, one of their last two wins was against the Super Kings, which will certainly boost their confidence.

Without a doubt, the major reason for SRH’s success has been their opening pair of Jonny Bairstow and David Warner who together have racked up runs in almost every match they have played. Although this is good and SRH would love to continue like this, the lack of game time for their middle order batsmen has resulted in collapse whenever the top two have missed out. With England set to host Pakistan in the earlier part of next month, Jonny Bairstow is going to be available for only a limited number of matches and SRH would certainly want to make the most out of it.

Arguably, Sunrisers Hyderabad are one of the better-balanced sides in the competition. They have the world’s number one T20I bowler along with the likes of Bhuvneshwar Kumar, Sandeep Sharma, Khaleel Ahmed, and Shahbaz Nadeem who all have been around in IPL for a considerably long time now. The return of Kane Williamson have provided their batting order with much-needed depth. All in all, Sunrisers Hyderabad are an extremely good side and it is hard to pinpoint one particular flaw in them apart from their little fragile lower middle order. On paper, SRH are an extremely good side, and it will be interesting to see how they fare at CSK’s den.

EXPERTS PREDICTION
With top three of both the sides doing considerably well, it is hard to look beyond them as the choices for the batsmen and we haven’t done any different as well. Ravindra Jadeja has done tremendously well for the Super Kings in the tournament so far and he takes up one of the two all-rounders’ slot in our lineup. Considering the number of left-handers in SRH’s top-order and Chennai’s surface, Harbhajan Singh is likely to play in the upcoming fixture. Singh along with Chahar and Khaleel Ahmed are our choices for the bowling department.

MATCH PREDICTION
Chennai Super Kings may not have been in their best form in the previous two matches, but they have a terrific record at home this season. On the other hand, Sunrisers Hyderabad are coming off a fabulous win over Kolkata Knight Riders and look in imperious form. With their top order consisting of David Warner, Kane Williamson, and Jonny Bairstow, and Vijay Shankar, they have arguably the best top-order of the tournament.

Having said that, it will be interesting to see how they fare at the Chepauk’s dust bowl. They, too, have a good spin attack which places them almost on par with the home side. However, considering the Super King’s dominance at this venue, the hosts are better placed to emerge on top in the upcoming encounter.#KhabarLive